August 07, 2013
Another hospital confinement had just been averted, thank God. Had it not, I would have been holed up in Makati Med for at least a week--again (although it's been a year since my last).

Blood cultures don't show growth until the third day. While it's often enough time to determine if the bacterial strain is gram-positive or gram-negative, it takes a full five to seven days before the particular type of bacteria can be identified. Because certain bacteria are resistant to certain antibiotics, only then can the doctors be sure if the antibiotics they're giving me will really work against those pesky microorganisms. Do the math; that's approximately how long I need to be confined at the minimum. 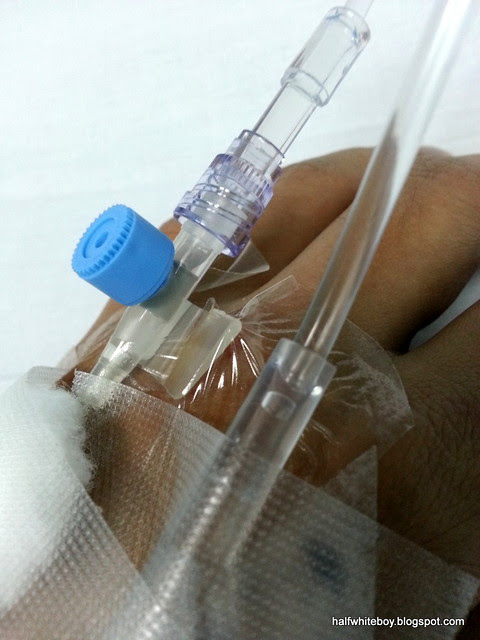 Had I not avoided confinement, I would have been tethered to a pole once again. And no, there's no wireless tethering available.

Saturday towards noon I started having chills. It was an all-too-familiar scenario for us, one that we definitely do not welcome at all. It meant a fever was starting and it meant I have an infection. Ascending cholangitis, here we go again.

Flashback to August 18, 2007: My first hospital confinement
It was a Saturday, and I was feeling some abdominal pain that I had always thought was hyperacidity. I went out to get some Zantac, my go-to self-medication for my little acid attacks. I'm not sure why it had always seemed to work when it was never hyperacidity after all but this time, it did not. The pain worsened and I started throwing up.

After my second vomit, My Bibe rushed me to the ER at Makati Medical Center. While walking to the main street to get a cab, I threw up for the third time. This was bad. I don't know if I just hadn't realized it earlier but my abdominal pain was already radiating to my back.

At the ER I was introduced to Plasil (Metoclopramide), an antiemetic (anti-vomiting drug) that's administered via injection. The vomiting stopped.

The doctors asked questions, took blood and urine samples, and subjected me to abdominal X-ray and ultrasound examinations. They also hooked me up to an IV. We related an incident that happened the year before in September when My Bibe rushed me to the same ER because I was suffering from extreme abdominal pain to the point that I was already hyperventilating. Of course I thought it was just a violent hyperacidity attack. After being administered several meds via IV, including a mild sedative, I eventually calmed down. A couple of hours later, I was sent home. Their diagnosis: gastritis.

However, it was only that day in August 2007 when things started becoming clearer, that it probably was never hyperacidity or gastritis after all. I don't remember if my urine was tea-colored, which would indicate an infection, but my WBC (white blood cell) count was definitely up. It meant I had an infection and that my white blood cells have multiplied to combat it, which is our body's natural defense mechanism against illnesses.

Before all the results came in, they already had me confined although it took a while before a room was available. It was the first hospital confinement of my adult life, and before that I really didn't give a hoot about what our medical benefits were. Thankfully I was covered.

Choledocholithiases, hepatolithiasis
My blood tests showed that all of my direct, indirect, and total bilirubin, along with my alkaline phosphatase, SGPT, and SGOT, were up. So there it was, I had stones in my common bile duct, the small tube where bile (produced by the liver) flows from the gallbladder to the duodenum (the first section of the small intestine). While most stones can be easily passed out into the duodenum, there are some cases when they are not. Unfortunately, I was one such case. 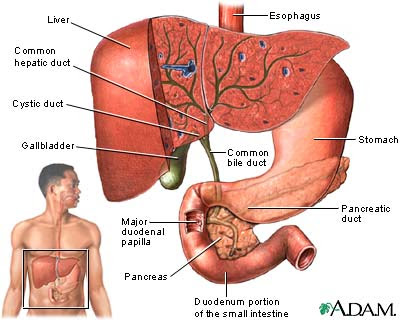 A quick lesson in human anatomy, so we're all on the same page when I talk about bile ducts, liver, and whatnot. [Source: health.allrefer.com]

Referred to in medical terms as choledocholithiasis, the presence of such stones blocks the flow of bile, causing dilation, which in turn, puts pressure against adjacent organs (which explained the pain in both my abdomen and back). If the blockage is prolonged, it can result to infection and thus become life-threatening.

Bile is produced by the liver to aid in fat absorption and in neutralizing any excess stomach acids before it enters the duodenum. It also serves as a conduit for the excretion of bilirubin, a byproduct of red blood cells recycled by the liver. An impairment or blockage of the normal flow of bile, also called biliary stasis, irritates the liver and results in elevated levels of bilirubin and liver enzymes, which show up in liver function blood tests. This is poisonous to the body and if not addressed, can lead to ascending cholangitis and then sepsis. That one--sepsis--can be fatal.

SGPT (serum glutamic-pyruvic transaminase) is another of those liver function tests that is often used to determine liver health. Elevated SGPT levels usually suggest liver-related problems like hepatitis, liver damage, or in my case, bile duct problems. While not conclusive on its own because SGPT levels normally fluctuate at any given time, it is often used in conjunction with other tests, like alkaline phosphatase, to distinguish liver inflammation from biliary duct problems. However, the liver can also be inflamed as a result of biliary duct problems. 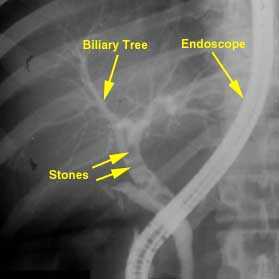 What choledocholithiasis looks like from an X-ray (with an endoscope used in ERCP). [Source: healthhype.com]

My attending physician was Dr Oswaldo Herrera, a cardiologist by specialization. He's the default attending for patients from the company I work for and he's the one who assigns specialists to a case. He assigned me a gastroenterologist, Dr Roel Galang, who was very patient in explaining to us my condition and even took lengths at drawing so we could picture everything better.

While most cases of choledocholithiasis involve gallstones, mine didn't seem like it because my gallbladder was clear, meaning, there were no gallstones there. Interestingly, X-ray and ultrasound results showed that I had multiple stones not just in my common bile duct (CBD) but in my intrahepatic ducts as well. Intrahepatic ducts are the network of smaller biliary ducts within the liver itself where bile flows into the gallbladder and then through the CBD. This other condition is known as hepatolithiasis.