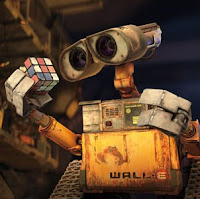 Waste Allocation Load Lifter Earth-Class – I really had to quickly get that during the few seconds in the film when what WALL-E stands for was shown.


I find Pixar’s latest offering depressing, though. In fact it’s upsetting. While I was all starry-eyed following cute little WALL-E as he went about his daily routine, a few minutes into the film and I forgot about him and saw what was around.

It’s been 700 years since the last batch of humans left Earth on board a fleet of luxury space liners because the planet was no longer able to sustain life. The seemingly insurmountable garbage problem required a massive five-year cleanup by deploying an army of WALL-E robots before the humans could return. But when the time was due, Earth was still too toxic for it to be inhabited by anyone, and so the plan failed.


The thought of that possibility made me cringe. At the rate we’re churning waste in this highly-industrialized world, yes, the planet could choke. And we haven’t even talked about global warming yet.


The WALL-E in the movie was the last of its kind yet it kept doing what it was designed for. Day by day it scooped up garbage into itself, compressed them into cubes, and stacked them up to form “skyscrapers.” Watching him do this was already sad in itself. It all seems pointless when there’s no one left to benefit from it.


But this robot had developed a curiosity for things. Anything he finds interesting he collects and houses them in his truck. This act sure looked cute in the movie but I couldn’t help but feel sorry for his centuries of solitude. And him playing an old tape of Hello, Dolly! only added up to the feeling, especially when he learns about emotion, about company, and you remember that he’s all alone.


One day he stumbled upon a seedling, which he replanted in a shoe. And then a sleek search robot named EVE arrives. They managed to somehow get along until WALL-E shows her the plant. As EVE’s “directive,” she keeps the plant, shuts off, and sends a signal back to the Axiom, one of those space liners that left Earth long ago.


Several light-years away aboard the Axiom, it was equally upsetting to see how the humans have degenerated. Because everything was fully automated they don’t even have to walk, they grew obese, oblivious to the “world” outside their holographic computer screens to which they were glued 24-7. Worse, they lost bone mass and even the ability to walk as we do today. Their legs were like those of a baby’s. It might be funny but to me it’s disturbing.


We may not be migrating into outer space after all but in a world of everything instant, everything automated, I dread the day when we find ourselves just like them.
Of course there’s the usual ray of hope when the humans return to Earth and begin rehabilitation. But it didn’t change how I feel about the whole movie. It was still depressing. Others may argue otherwise but that’s what I feel. But that doesn’t mean that I don’t like the film. In fact, I love it. It’s brilliant!


Pixar did it again. Despite the very limited dialogue, the film manages to get a very strong message across. It’s just pure Pixar magic at its best! The film scores high in content and execution, and catapults itself right up there among the likes of Finding Nemo and other Pixar classics. In fact, WALL-E should shake up Horton Hears a Who’s chances at the Oscars’ Best Animated Film category next year.