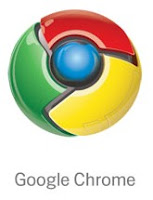 It's been more than a week now since I downloaded Google Chrome, the internet search giant's answer to Microsoft's Internet Explorer.  Call me stupid but I always thought Firefox was Google's.  Well, this moron just learned that it was just funded (partly) by Google, but is not Google's.

Back to Chrome, they say it's supposed to be better, faster, and much simpler to use.  Better, I really don't know.  I mean, there's much less clutter, which is characteristic of Google, but I can't really give an expert opinion.
The layout, of course, is different.  Tabs are at the topmost - no more title bar - and a nifty little plus sign lets you add a new tab with just one click.  And when you do, screenshots of your most-visited sites are displayed (kinda like Mac, they say).
On the second row are the Back and Forward buttons, along with one to reload your current page, another for bookmarking, the address bar, a drop-down button to contol you current page, and another one for customizing Chrome.  I was looking for a History button but being Google, I quickly realized that they incorporated it to the Back and Forward buttons.  Your browsing history appears when you hold down these buttons.  You can also view your full history, which is as detailed as it can get - down to date and time.  Deletion can be done by date.


The third row is left for all your bookmarks.  Then there's no status bar or anything at the bottommost part.  This is supplanted by a discreet tab that appears when connecting to a site, and immediately disappears when done.
Being used to having a Google search tab in both my IE and Firefox, I looked for it but there was none.  I also couldn't figure out how to install it to Chrome.  After a while, I realized that the address bar doubled as a search tab.  Cool!  Less clutter.  Very Google again.
I can't comment on speed 'cause my internet connection just sucks, which makes it impossible for me to see any difference from the other two browsers mentioned.
But will Chrome be my browser of choice?  Yes.  I'm partial to Google, that's probably why.  In fact, I always had a predilection to use Firefox over IE, thinking it was Google's.  But now there's Chrome, so I'll use Chrome.  Yet there's no escaping Bill Gates completely because just about every intranet site in the office runs on IE.  And I can't control that.
I think it's for that very reason - Microsoft's ubiquitous presence - that Google may find it hard to outdo IE with Chrome.  Will it at least overtake Firefox?  Let's wait and see.
google google chrome lifestyle