Looking back at Phuket FantaSea: The restaurant and theater

In this post I'll show you Phuket FantaSea's gigantic buffet restaurant and the show's extraordinary theater. Our tickets covered both the show and a buffet dinner at Golden Kinnaree. I already forgot how much it cost but as of writing, it's at 1,900 baht according to their website. You also can purchase tickets for the show only if you don't fancy having dinner there. There are also options for upgrade to a seafood buffet dinner and for the show, a "gold seat" upgrade, which guarantees you premium seats. 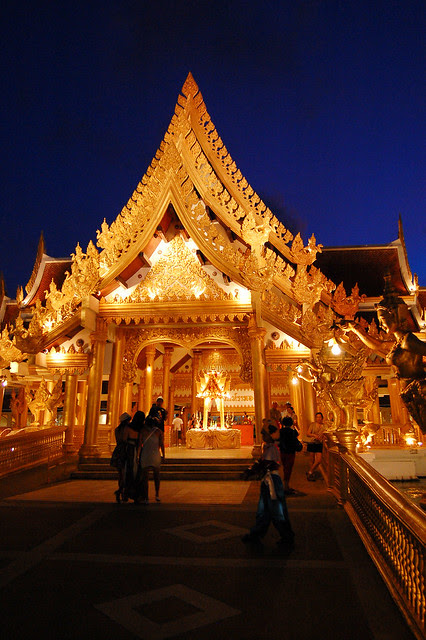 The restaurant is fronted by water, with fake giant lotuses afloat. The huge -- and I mean really huge -- catfish, however, are real. 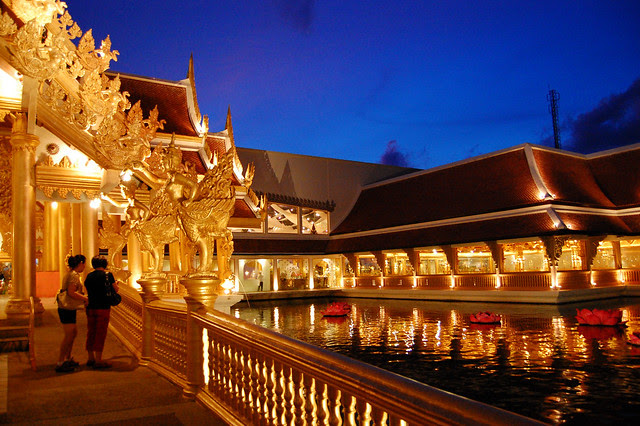 A footbridge leads you across the water and into the restaurant. Even if it's just a short bridge, it's never short of drama, which is lit by these intricately molded statues of the mythical half-bird, half-woman kinnarees: 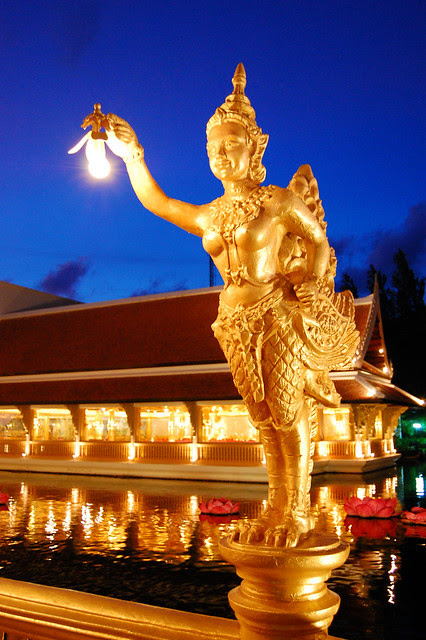 I was obviously already impressed with what's outside but I was blown away by what beckoned as we actually entered the restaurant. It was nothing short of grand. 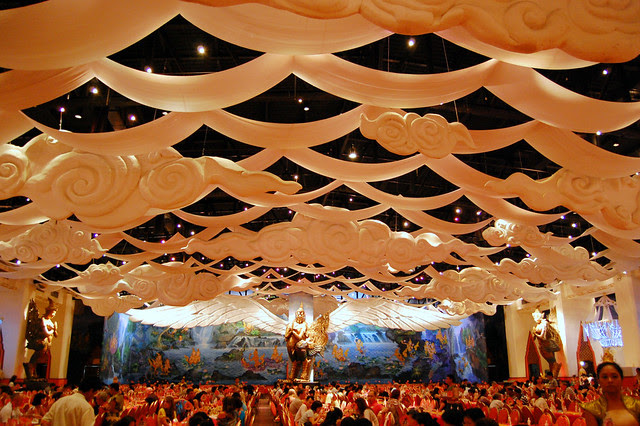 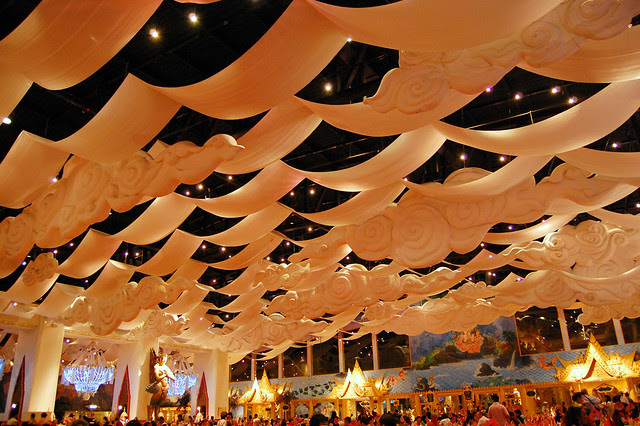 With a 4,000 seating capacity, how could it not be huge? But it's just so huge! The interiors are inspired by a mythical forest complete with giant kinnarees, as if they're watching over the diners below. 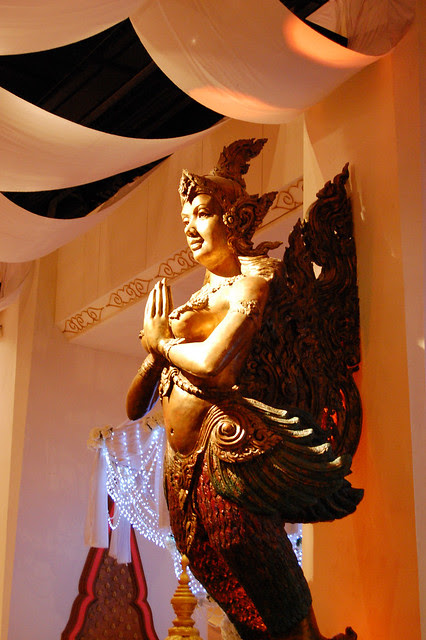 The buffet areas offered both Thai and international cuisine. I don't remember much about the food but I was definitely satisfied. I think it was more about the place than the food, that's why.

It was now time for the show and we were off to the Palace of the Elephants, which was right across the restaurant. Between them is a fountain area where elephant rides are offered around it. Palace of the Elephants is what they've christened their theater, which was a stunning work of art. It reminds you of Angkor Wat with all its intricate details -- except that there are lots of elephant statues here. Even if this is just a theme park, I'm impressed with the structure. It's concrete, by the way, so it feels very authentic. Just see for yourself: 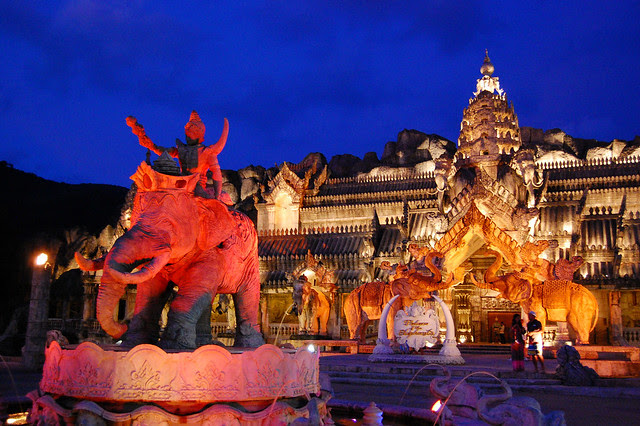 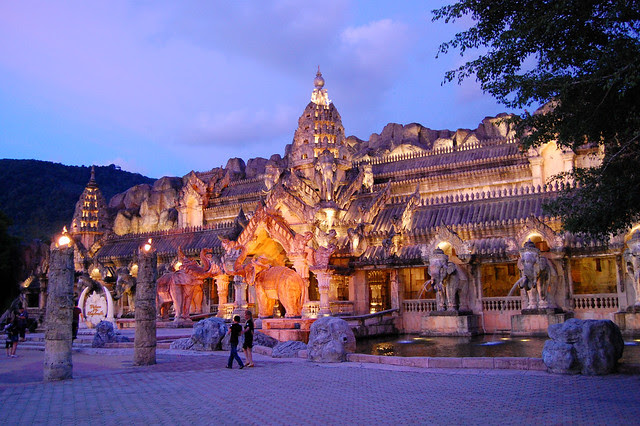 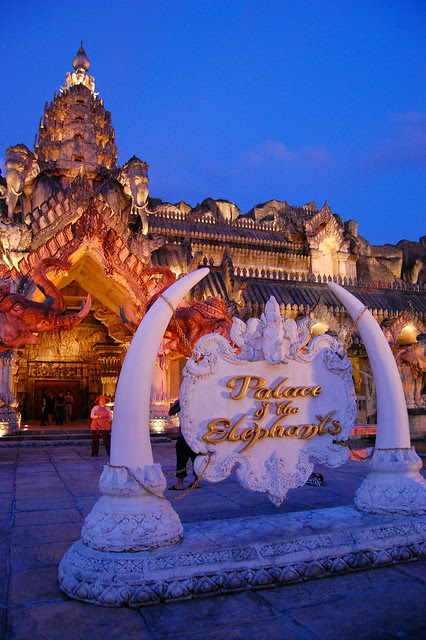 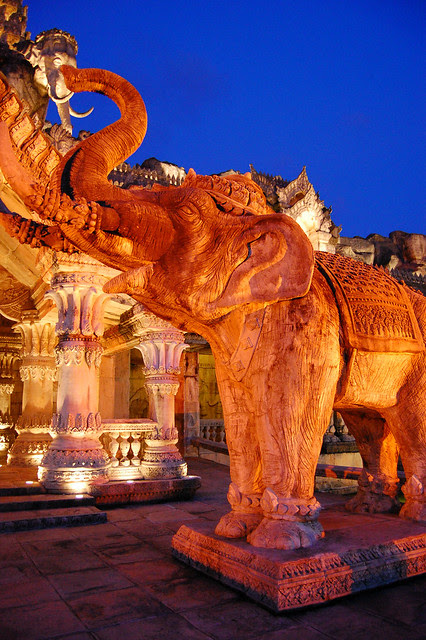 Inside, we were all asked to deposit our cameras, mobile phones, and the like. So I only have memories of the show, no photos.

The show's called "Fantasy of a Kingdom," which blends Thai history and mythology into an extravaganza of song and dance, acrobatics, onstage effects, and some animals that of course include charming elephants. The performers -- some with torches, others with some props, and some on elephants -- descended on the stage from the audience area to signal the start of the show.

The set pieces were no joke, and neither were the costumes. Everything was made to impress. Heck, they even had rain onstage at one point! One of the most memorable parts for me was when about a dozen chickens scuttled from one end of the stage to the other. It was just a charming sight to behold. Then some birds flew from across the theater onto the stage. They already had me at the chickens but how on earth were they able to train those birds to fly as directed? It was just amazing!

We were also looking right above us at one point where performers clad in glow-in-the-dark tights gave an aerial acrobat exhibition. Mesmerizing! But the highlight, of course, came when the elephants showed up. They performed tricks that easily charmed the audience. I mean, how cute is it to see elephants sit on platforms?! I was all of a sudden seeing Dumbo there! But best of all, it was all-smiles for me when sixteen elephants were all sharing the stage, with maybe half of them standing with their front feet resting on each other's backs. I think you get the picture of how big this stage is. And to give you an idea of what I'm saying, I got this photo from the internet: 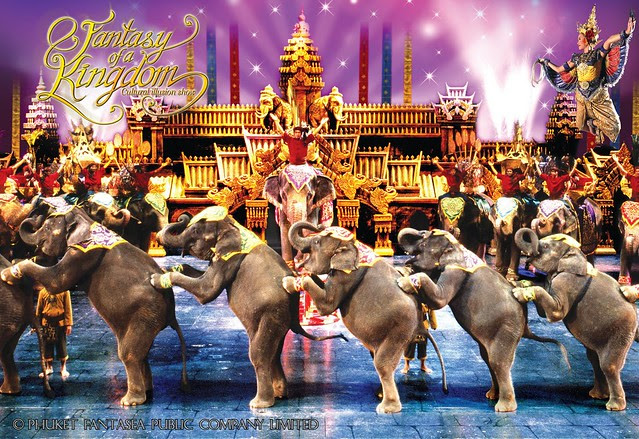 Although the show dragged in some parts, Fantasy of a Kingdom is definitely a show worth watching. It's production value at its best! And even if the show is the same day in and day out, I'll still be watching it again.

One more positive note: you'd think it would be hell to retrieve your deposited belongings with all those people who watched the show, but lo and behold, it was a breeze! Their system was extremely efficient that you would barely notice the line in front of you's gone in no time. Phuket FantaSea was just a wonderful experience through and through. 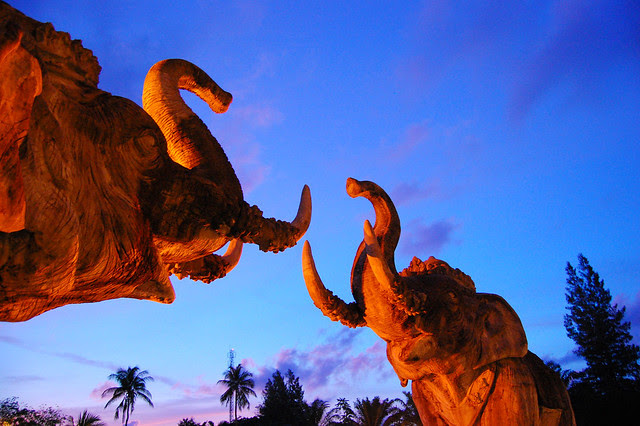