September 04, 2011
Yesterday while at the Starbucks in Greenbelt 3, My Bibe and I saw a sign posted on their board that had a kitten with the caption, "Will you be my Mommy and Daddy?" It was from CARA Welfare Philippines, a non-profit organization that's all about compassion and responsibility for animals (CARA). It aims, among other things, to reduce pet overpopulation through low-cost spaying and neutering, to educate people about animal welfare and their rights, and to provide caring and responsible homes for rescued animals through their adoption program. 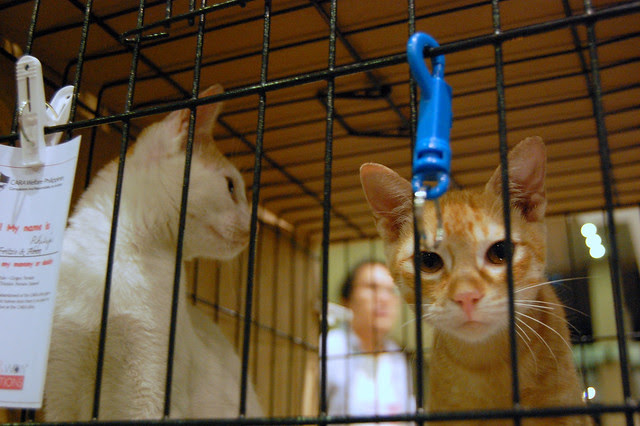 Two of the kitties up for adoption yesterday at Greenbelt 5.

CARA does not receive any government funding and relies solely on private donations and the kindheartedness of its volunteers. It's a very small group of volunteer members. They have a clinic in Malate, Manila where they house about 25 cats. The rest -- around 200 if I remember it right -- are cared for by members in their own homes. I spoke to Tanya Guerrero, their Treasurer, and she has 20 at home. She said members acknowledge their own limitations as to how many they can really care for, and that 20 was her limit. She added, however, that their President, Nancy Cu Unjieng, has about a hundred! Their Vice President, Malin Oskarsson, said Nancy was the "craziest" of them all. But it's definitely crazy in a good way.

Anyway, CARA showcased a good number of cats plus two dogs yesterday at Greenbelt 5. After my haircut I went straight to the venue and just stayed there with a seemingly permanent smile plastered on my face at the sight of these lovely felines. I left after an hour and came back with My Bibe. I told Tanya I would have wanted to adopt but we already have two cats. She said they were hoping for at least ten adoptions that day. By the time we left, there were six of the cats adopted already. I hope they were able to meet their target. 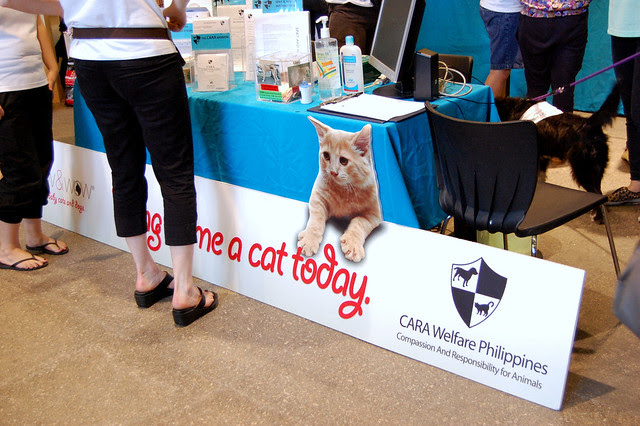 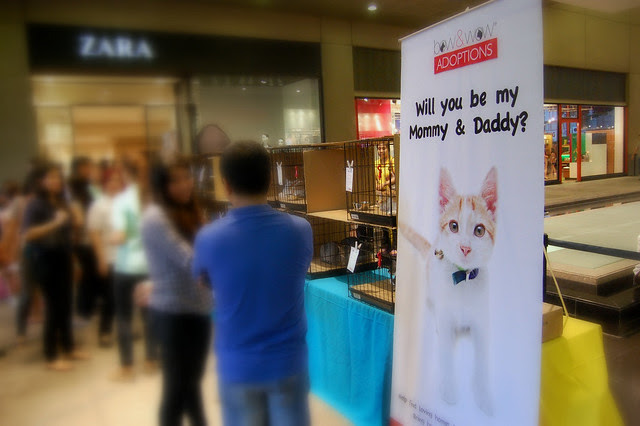 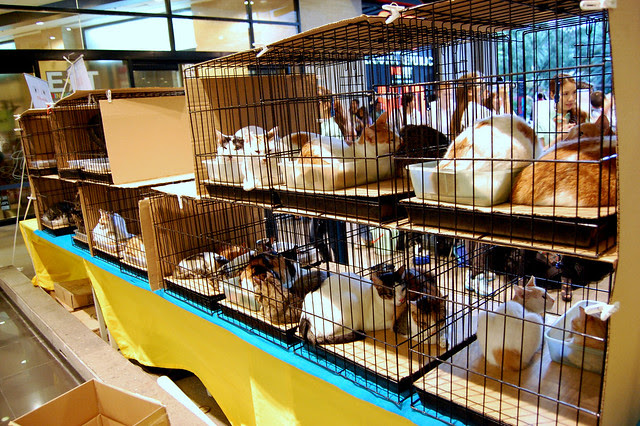 CARA understands, though, that not everyone can adopt, which is why donations can be very important. They also have a "Sponsor a Pet" program which really means a lot. They also promote TNR, meaning, Trap/Neuter/Release. They catch stray cats, neuter or spay them, then release them back. This way, the stray cat population can be controlled.

It is a sad thing but here in the Philippines, people in general have not much regard for cats and dogs. Well, dogs have it a little better because they're treated as bantay or guard dogs. Although they're fed scraps, at least they're fed. Cats, on the other hand, are automatically shooed away any time.

Well, for one, I think it's the economic condition of most Filipinos, who are already having a very hard time feeding and raising a family. What else can be expected of them when it comes to cats and dogs? On the other hand, however, I think it's just how people are brought up. My Bibe herself was witness to two examples yesterday at the venue. There was a kid whisked away by her grandma who said, "You adopt babies, not cats." Another was a kill-joy dad who promptly told his kid that he was allergic to those. You know, parents who are just against their kids wanting a pet from actually having one. I know some.

Anyway, here's a look at some of the animals yesterday at Greenbelt 5 (Note: these are all rescued cats and dogs): 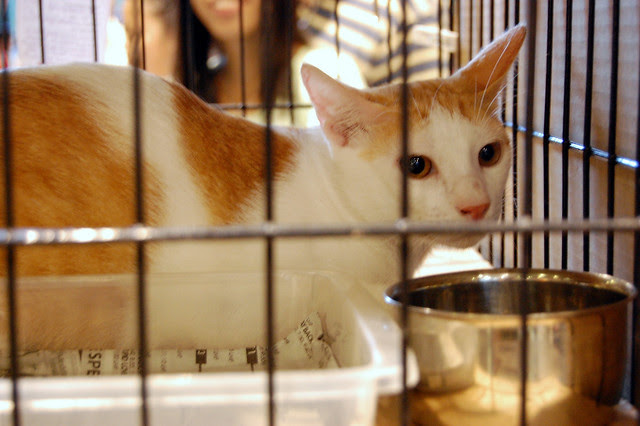 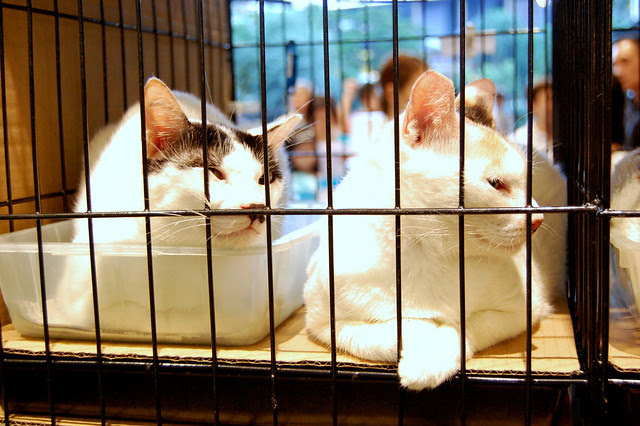 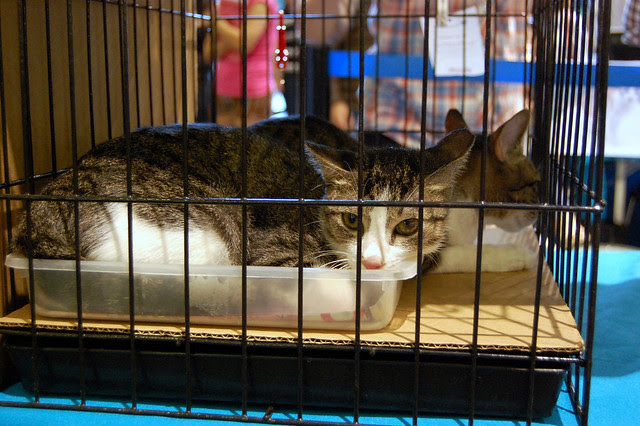 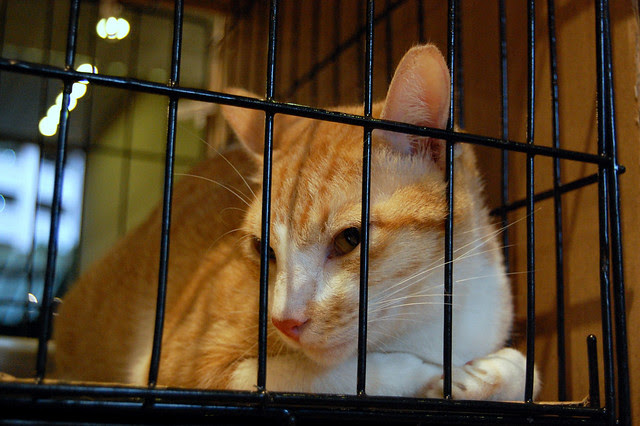 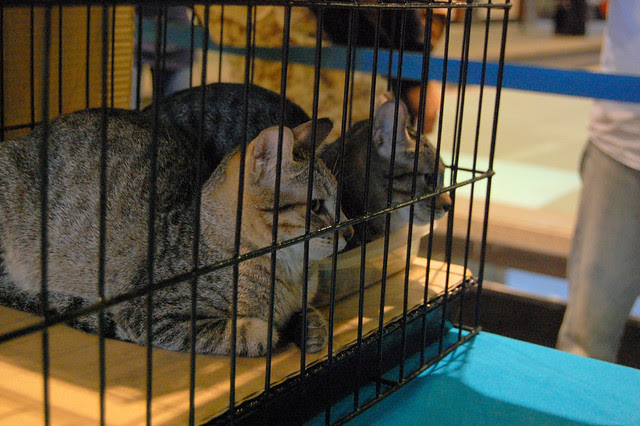 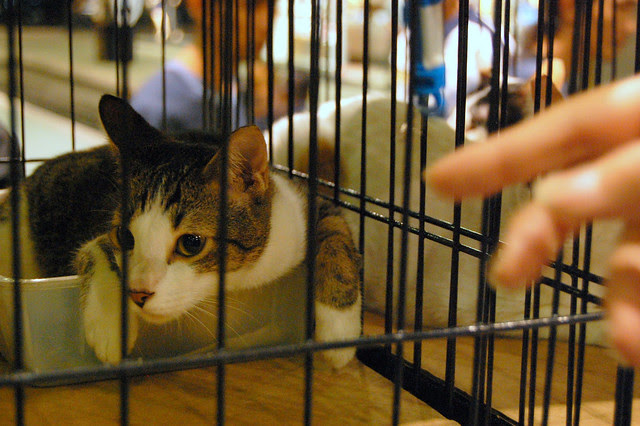 These two below were rescued when they were just, maybe, two days old. Their eyes were still closed with their umbilical cords still attached when they were brought in. Now at two and a half months old, they're two of the cutest and most playful cats out there. 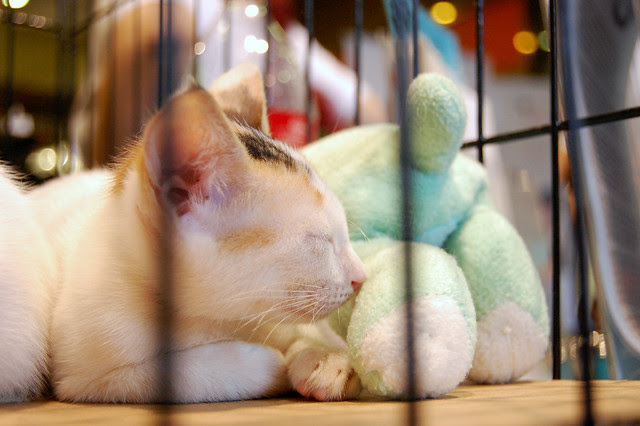 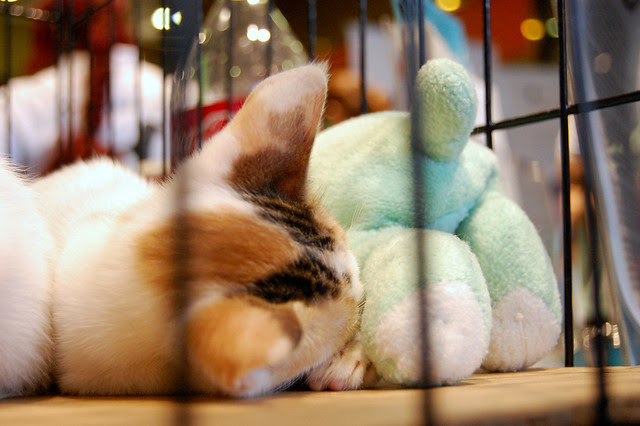 She reminds me of Kwittie Boy who loves to snuggle and burry his head onto something.

This is the other half of that kitten tandem, and she's got blue eyes! 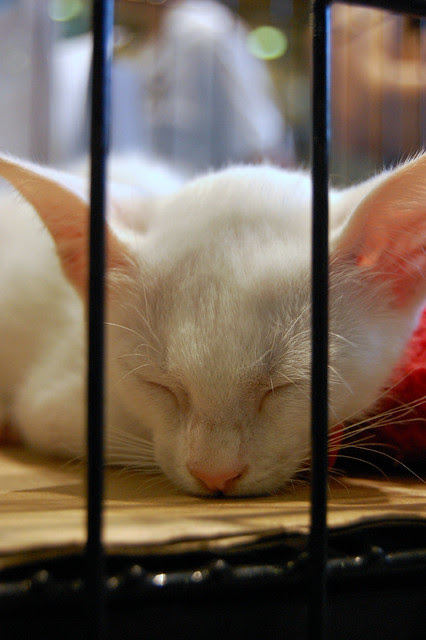 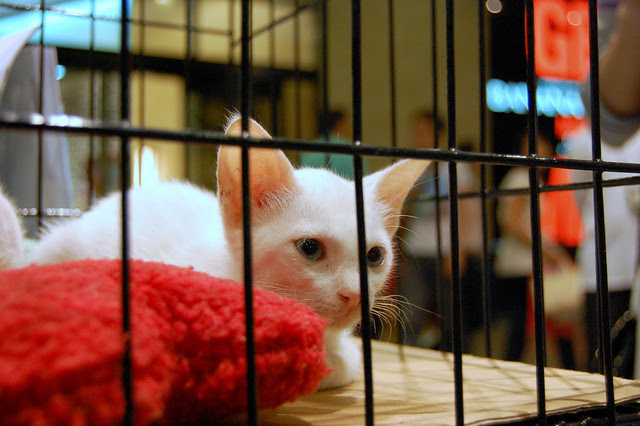 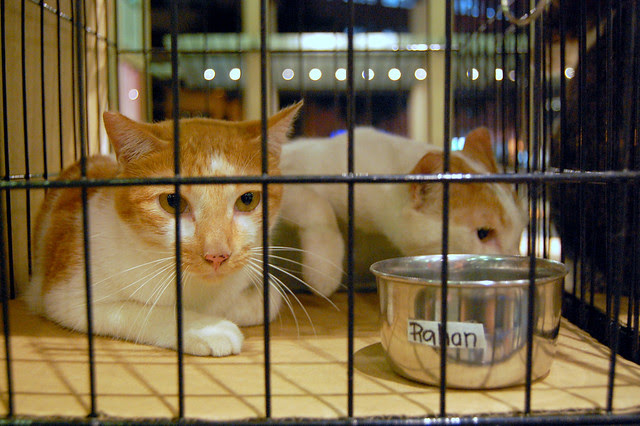 A playfully named duo: Basu and Rahan. Put together, it's basurahan, meaning garbage can. Maybe they were rescued from one. 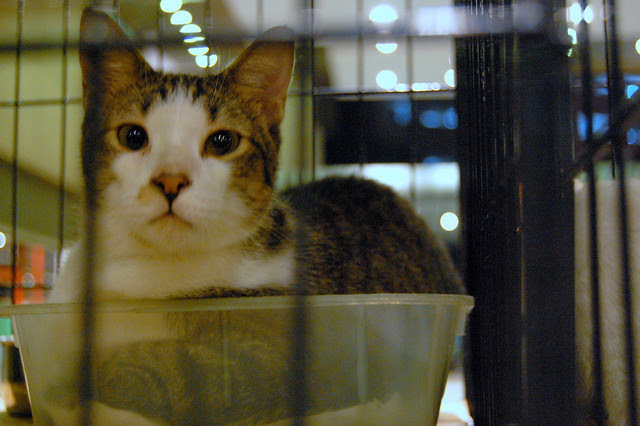 This one just looked so behaved. 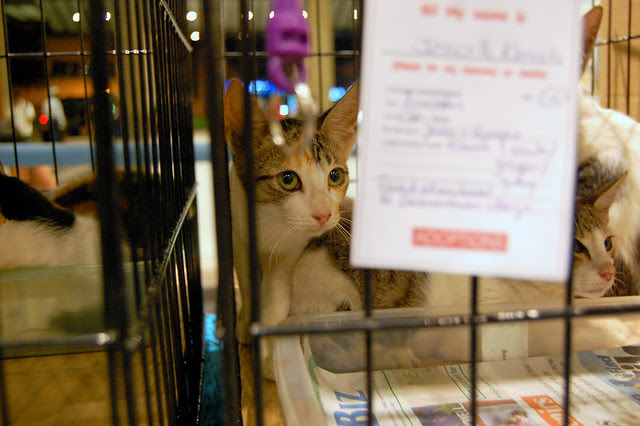 These are two of my favorites. They're both cute and very playful. 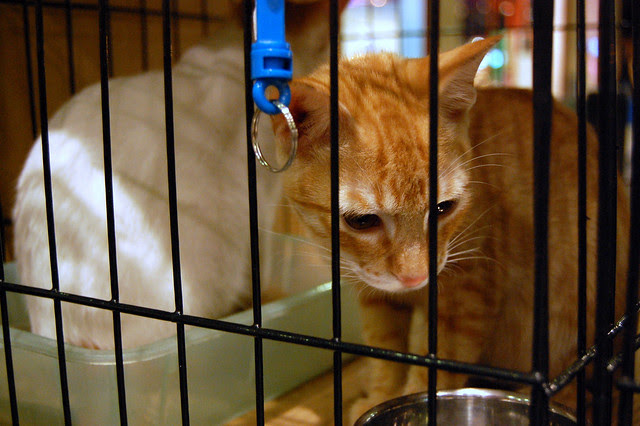 I loved how the light reflected from the stainless steel bowl illuminated her face. 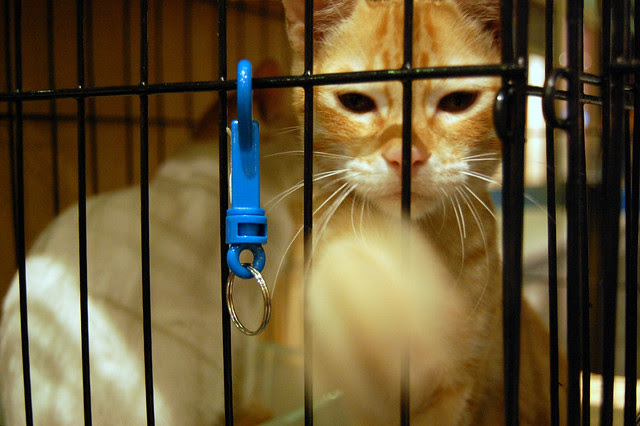 It's as if she was motioning to people to come and get her. 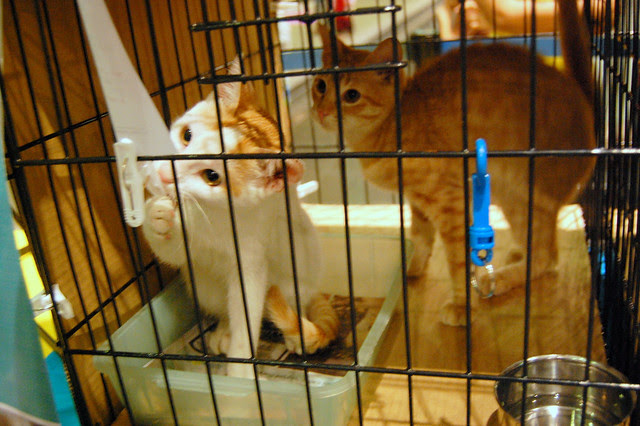 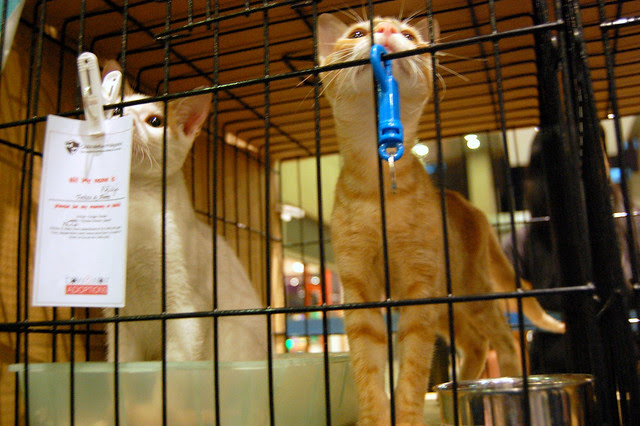 Aren't they the cutest?

Here are the two dogs: 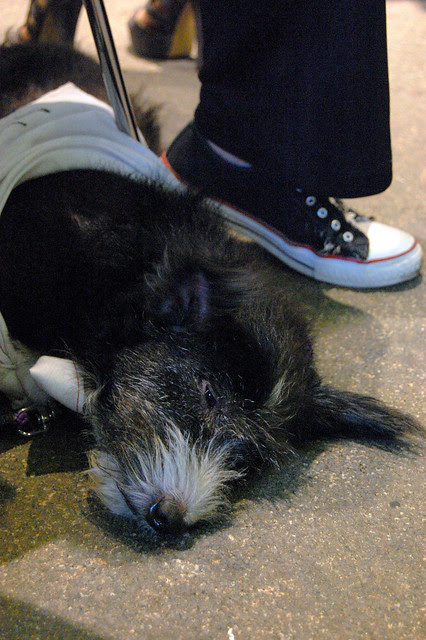 She was rescued along EDSA, right on the center island between two opposite lanes of speeding vehicles. She was tethered so tight onto something and rescuers didn't exactly know how long she'd been there. 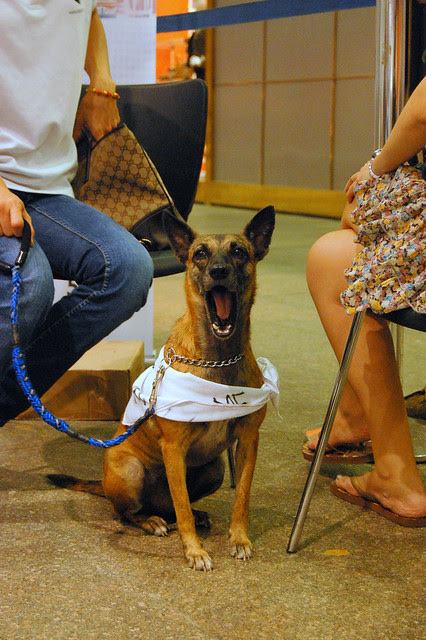 And I got to "baby" one of the kittens! She was so sweet, constantly kneading on my chest and arms as I stroked her. Soon enough, she fell asleep. 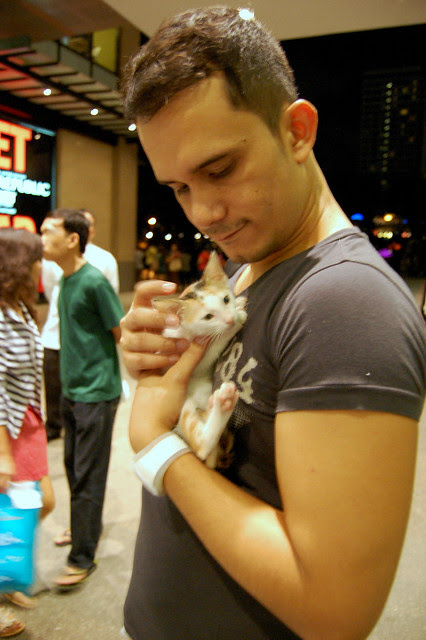 For more information about CARA, go visit their website: http://www.caraphil.org/mainsite/. It contains loads of information about them, how you can donate, or even adopt a furry friend. You can also check out some of their featured rescues along with a gallery of pets up for adoption.