The magazine alter-ego of the Philippine Daily Inquirer

April 23, 2012
I've come to live seeing the Philippine Daily Inquirer repeatedly sport a front-page design reminiscent of a magazine for a while now. It's that generous use of a single photo, most often unrelated to any news article, that spans the entire width of the paper and with the Inquirer logo re-positioned to suit the photo. And as with magazines that layer sections of a photo subject to sit in front of its logo but leaving everything else in the background, the Inquirer does that as well.

Not that I'm complaining. In fact, I sort of took a liking to this style because it instantly brightens the front page. And with that I often joke that it wants to be a magazine. Last Saturday, however, the Inquirer took this magazine style to a whole new level: 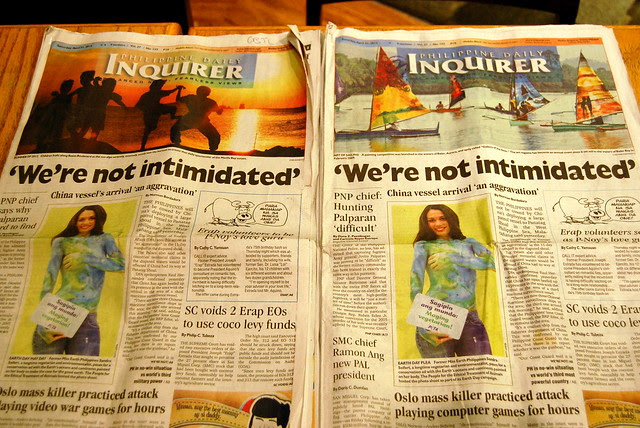 I kid you not. Yes, they did two different front pages, much like how magazines release an issue with multiple different covers. At first I thought they were different issues but no, they're both dated April 14, 2011, and every other content but the "cover photo" is the same.