SMART wins big at 2012 Telecom Asia Awards, sets record for most wins in one night by a single carrier

April 19, 2012
Philippine mobile operator Smart Communications set a record three wins at the 15th Telecom Asia Awards last night (April 19, 2012) in Bangkok, Thailand. This is reportedly the first time in Telecom Asia's history that a single carrier bagged three trophies in one night. (Axiata may have also won three in 2010 but its third win was by its Malaysian subsidiary Celcom, technically a separate carrier.) 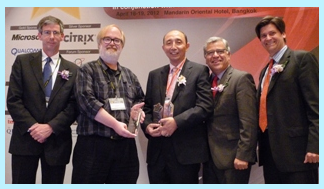 The night's other big winner was SingTel with two trophies, one for Best Asian Telecom Carrier and another for Best Regional Mobile Group. SK Telecom was named Best Mobile Carrier while Telekom Malaysia was adjudged  Best Broadband Carrier. The other winners were BT Global Services for Best Managed Services Provider, Pacnet for Best International Wholesale Carrier, KDDI (for A-Fund) for Most Innovative Telecom Project, and Verizon Enterprise Solutions for Best Cloud-based Service.

Telecom Asia is Asia's largest regional telecom publishing group. It publishes the magazine Telecom Asia and the website www.telecomasia.net, aimed at telecommunications professionals around the region. Combined, these titles serve more than 100,000 subscribers.