A Chinese news anchor blurted on TV that the Philippines belongs to China. Who knew? I must have slept through all my history classes.

The website of the Philippine News Agency was hacked by the Chinese. Wow, I didn't even know they had a website!

* * * * * * * * * *
The impeachment trial of Chief Justice Renato Corona has just resumed last Monday. It's reality TV at its finest once again!

The President struggled with a coughing fit during his speech at the opening ceremonies of the Palarong Pambansa. Sorry, smoker's cough. 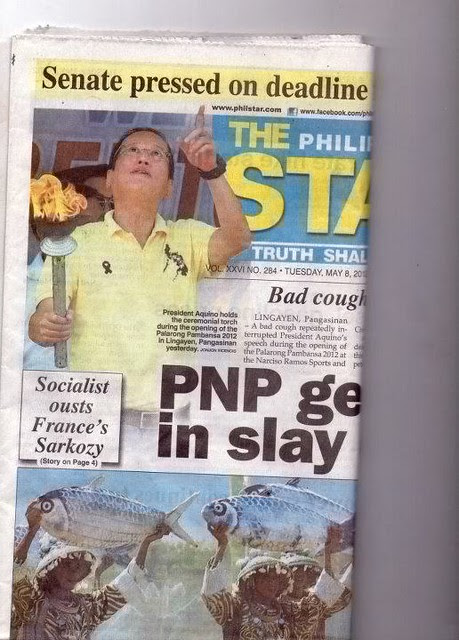 
* * * * * * * * * *
Mexipino contestant Jessica Sanchez got a standing ovation on American Idol today. The judges must have been tired of sitting already.

Season 2 of The Voice seems like deja vu. Another black bald guy won who won't sell any records. In AI it's a guitar-toting white dude.

DJ Mo Twister and two others were slapped with a two-week suspension for starting the #CharicePempengcoSexTape Twitter hash tag on their radio program. Charice took offense and was obviously hurt. Because there's just.no.truth.to.it. *sob*

Raymart Santiago and Claudine Barretto held a tearful press conference yesterday. Satisfied with the take, the director called it a wrap. 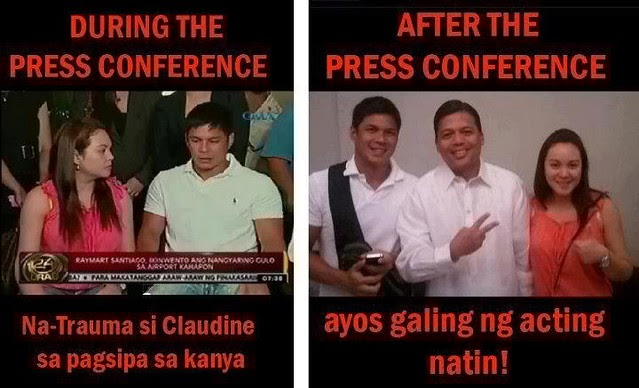 
Santiago and Barretto are also filing a child abuse case against Mon Tulfo. I didn't know he was also a pedophile. Tsk! Tsk! Bad Tulfo!

More thoughts on the Tulfo-Santiago/Barretto brawl at NAIA3:
- Times must be really hard because even journalists are now moonlighting as paparazzi. But Mon Tulfo, you're busted (I mean, your face is).
- Raymart Santiago took advantage of the situation and showed the world that he is still the action star that he once was.
- Claudine Barretto should cut down on her rice intake.
- It's quite awkward for a guy to be caught in a scuffle wearing hot pink.
- The CCTVs at the baggage claim area were not working. Surprise!

NAIA police and security were criticized for not being able to control the situation that was Thrilla in NAIA. Their response, "They were impervious to our spells!" Clearly, someone has to teach them more than just "Accio, bomb!" with their magic sticks/wands.


* * * * * * * * * *
To decongest traffic at NAIA, the genius DOTC Secretary Mar Roxas wants airlines to reduce the number of flights they operate. So to meet the Tourism Department's international tourist arrival target of 4.6 million, most tourists will now have to arrive by roro. Problem solved.