Around Siquijor in a day

May 27, 2012
See related posts:
Backpacking in Siquijor
Kiwi Dive Resort: Where 'The Backpacker' stayed in Siquijor

To most Filipinos, Siquijor is usually associated with shamans, potions and whatnot, and wrongfully with aswang and such mythical creatures. Those who know better, however, regard the island province for its white sand beaches and excellent dive sites. But what else is in Siquijor?

I'll attempt to answer that by going on a day-long motorbike ride around the island and with my driver/guide Matt, sample the many sights that Siquijor has to offer.

Sandugan Beach
Found north of Larena town, this was where I set base for my backpacking trip. It's a quiet strip with only three resorts (although there's one more far up north), some mangroves, and a couple of fisher folk. It faces West, so it's the perfect spot to watch the sun dive into the horizon.

Church of St. Francis of Assisi and Bell Tower
Located right at the heart of Siquijor town, it's a colonial-era church with a belfry a few meters away (more on this in another post).

Paliton Beach
There are a couple of resorts scattered between Sandugan and Siquijor town, but we went straight to another quiet strip of beach tucked several meters away from the highway. Paliton Beach is actually part of the resort-filled San Juan town but there are no resorts here yet (although Coco Grove has a property here). Instead, you'll find small fishing boats lined up on the shore where you can enjoy your solitude. 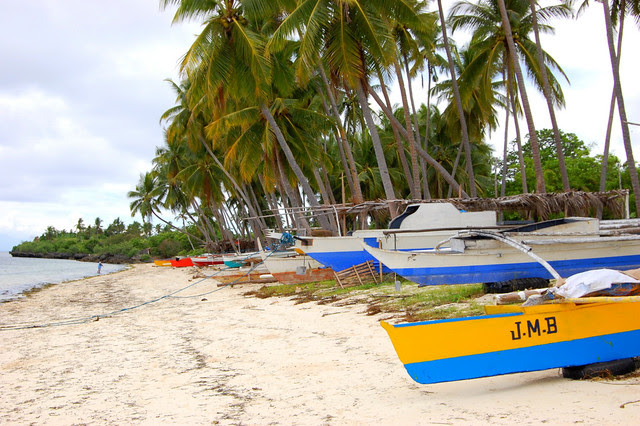 San Juan Beach
This is the part of Siquijor with the most concentration of resorts. The beach to me is no different from Paliton and Sandugan -- shallow with rocky and seagrass-populated patches. I was unlucky to see its full beauty, though, because the onset of the monsoon season had already sent dead seagrass and similar stuff ashore. 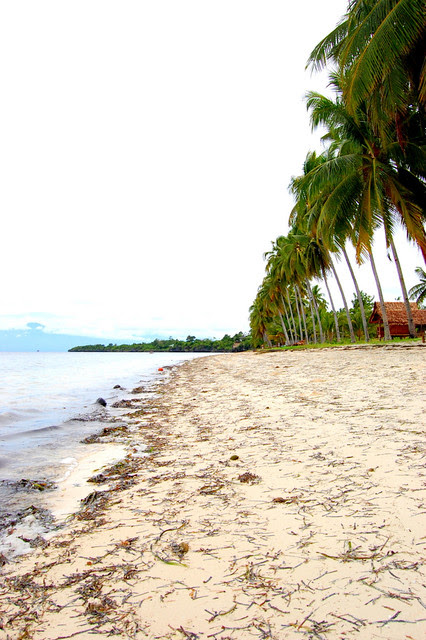 Dead seagrass and other things are washed ashore this time of the year; there's just no escaping it. 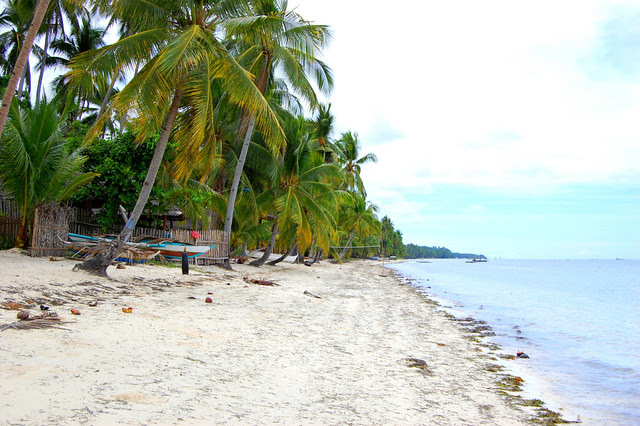 San Juan has a long strip of beach, perfect for a long yet leisurely stroll.

Capilay's Spring Park
Because it's a natural spring, I thought it was tucked away somewhere inland but I was surprised to see it just beside the road in the town of San Juan. I was, like, awesome! It's supposedly a nice place but how the pool, the concrete tables, benches, and the cottages were designed just made it somewhat cheesy for me. I guess it's more for the locals than for tourists. 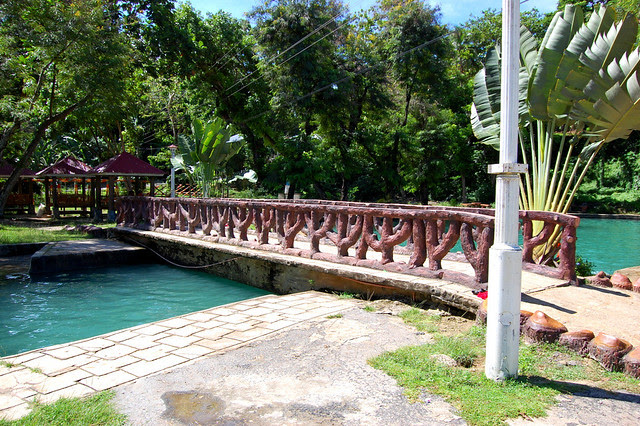 You get what I mean by cheesy? 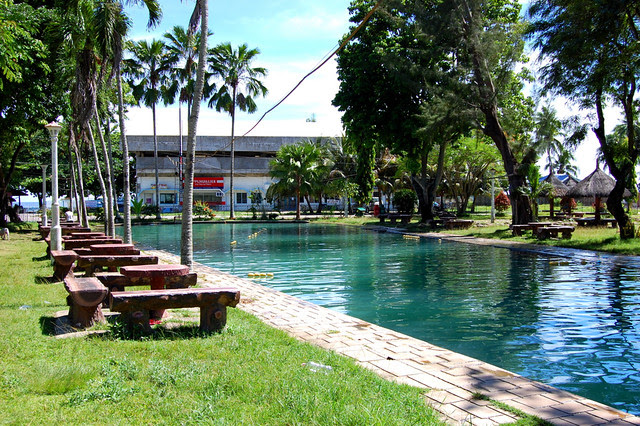 I told you it was just beside the road.

Mt. Bandila-an
This is the highest point in the island and where, according to Siquijor locals I've spoken to, most healers and mangkukulam reside. I no longer had the time to check it out, though.

Old balete tree
This banyan, or balete, tree is said to be 400 years old and even enchanted. I was expecting a monster of a tree but when I saw it I was kind of underwhelmed. It looked just like any balete tree to me. 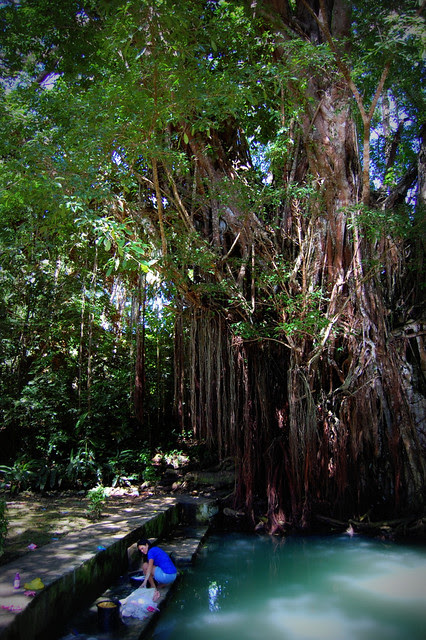 Enchanted? Yeah, tell that to this lady doing her laundry here. 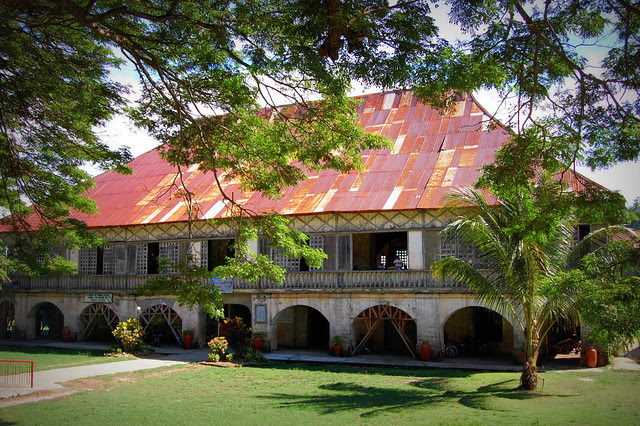 The old convent, declared a historical landmark in 1978. 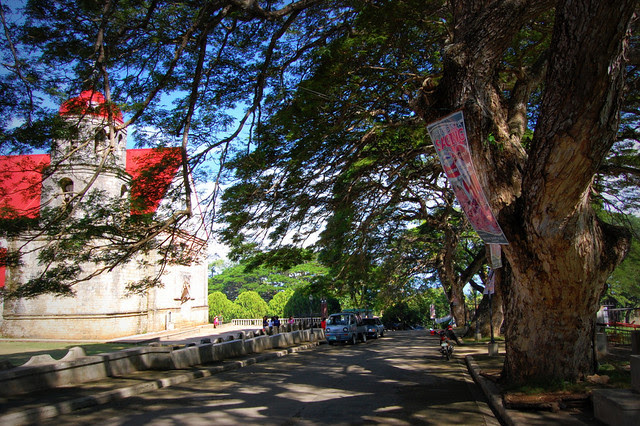 I just love this road between the San Isidro Labrador church and the old convent. I took some time here to simply revel underneath the relaxing shade of these humongous trees.

Cambughay Falls
Accessible by descending a 100+ step concrete staircase, Cambughay is a stream with a series of at least three drops. The drops aren't steep, though, but maybe it technically still qualifies as a waterfall. I mean, I've long avoided checking out "falls" in any area because I think the term has thoughtlessly been used many times over in this country to name even the simplest of drops in a stream just to create an attraction. Just saying. 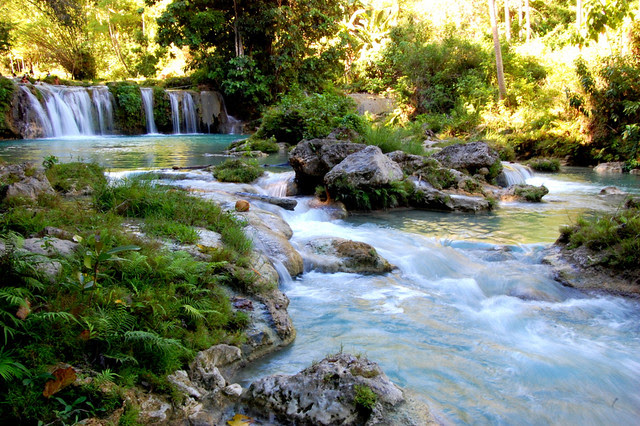 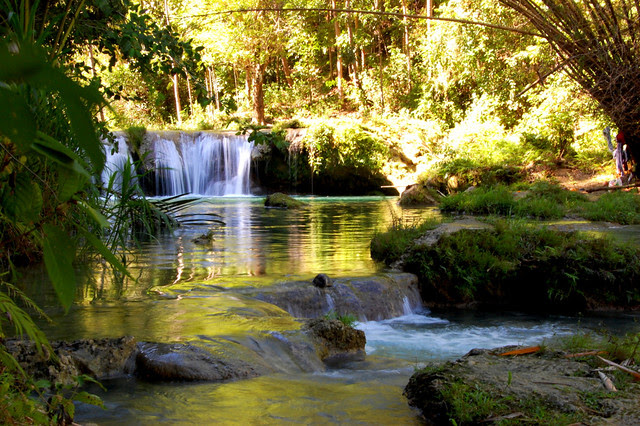 Not as impressive as bigger waterfalls, but not really bad either.

Word of warning: in a police checkpoint en route to Cambughay, the officer reminded my driver/guide to accompany me to the falls and to watch over my stuff. He didn't want me, or any other visitor for that matter, to have a negative experience of Siquijor. My guide also told me there were "snipers" in the area. He meant naughty guys peeping through rocks and foliage when ladies, especially those in bikinis, are around. 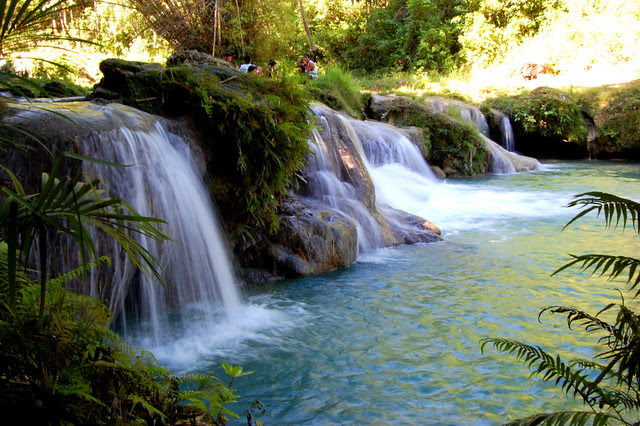 The second drop. You can more or less have an idea of the height of the drop by using the people in the photo as reference. 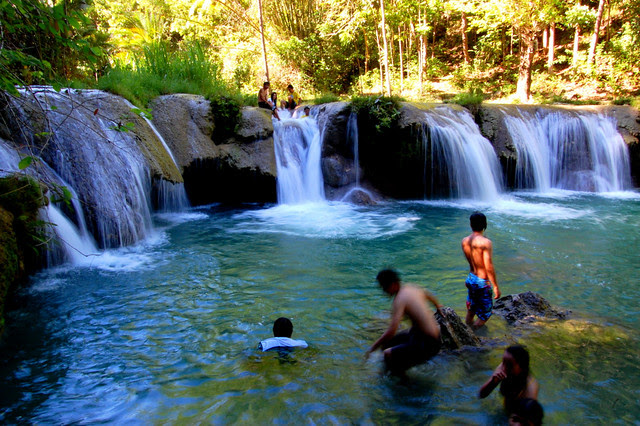 The topmost drop upstream. I guess it would be nice to take a dip but I wasn't in the mood.

Kagusuan Beach
Unfortunately I wasn't able to see what it's like here. Lonely Planet described it as really beautiful but my guide said the beach was closed. Too bad.

Salagdoong Beach
This seems to be the local government's crowning jewel of sorts. It's probably the most swimmable beach in all of Siquijor -- with deep enough parts and all -- but I just found what the local government has done with it downright appalling.  A lengthy concrete seawall lined up the entire stretch of the beach, there were cheesy concrete cottages everywhere, and horror of horrors -- concrete water slides! 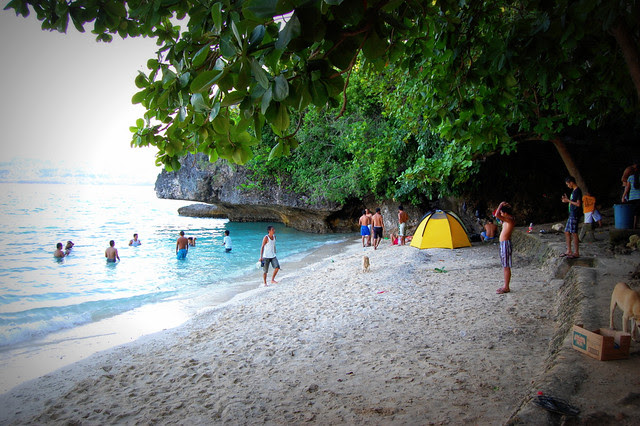 There was just too many people for my liking. But then of course, it's a public beach. 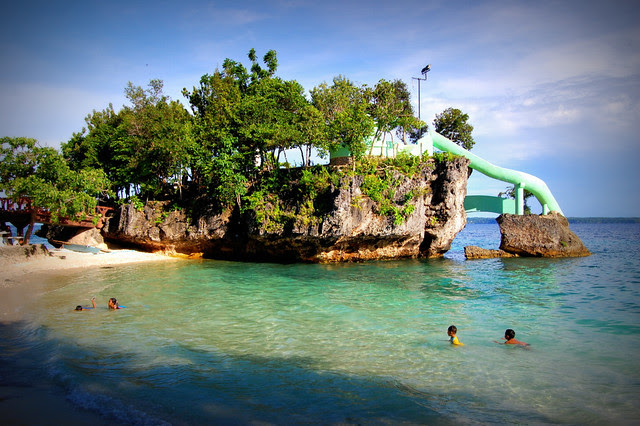 The natural beauty of Salagdoong totally marred by this monstrosity.

I went there on a Sunday, so the place was jam-packed (my guide told me to try it on a Monday or Tuesday if I wanted less people). Horrible voices coming from videoke machines  were competing with music blaring from someone else's stereo; it was chaos! The place also had a pool (for a fee), a restaurant, a strip of private rooms with veranda, and a hotel atop a hill. It clearly wasn't a place for me but it sure served the local Siquijor market. Like Cambughay, Salagdoong is more for locals than anybody else. 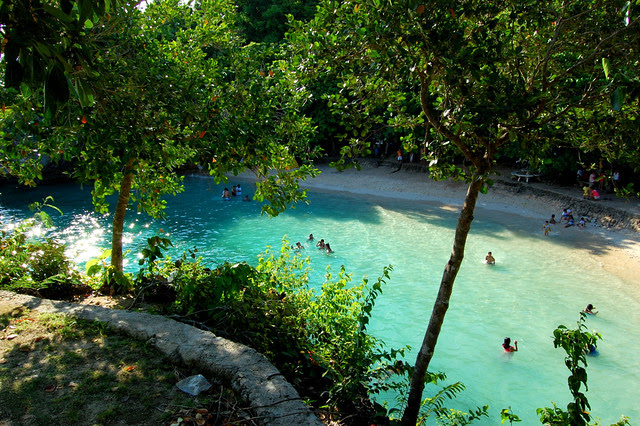 To me this is the most swimmable of all Siquijor beaches. It was deep and sandy enough; not much rocks and seaweed. 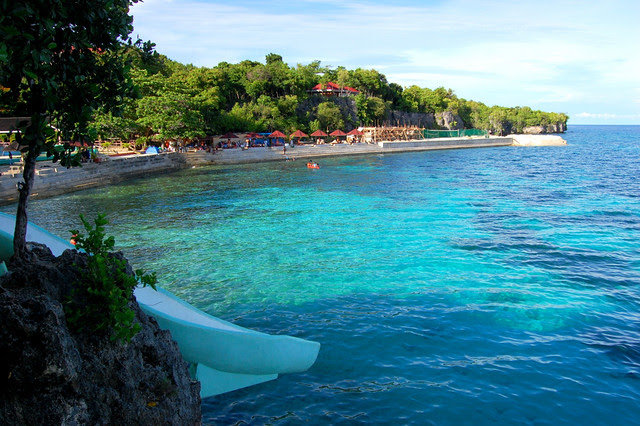 What a waste of beauty. 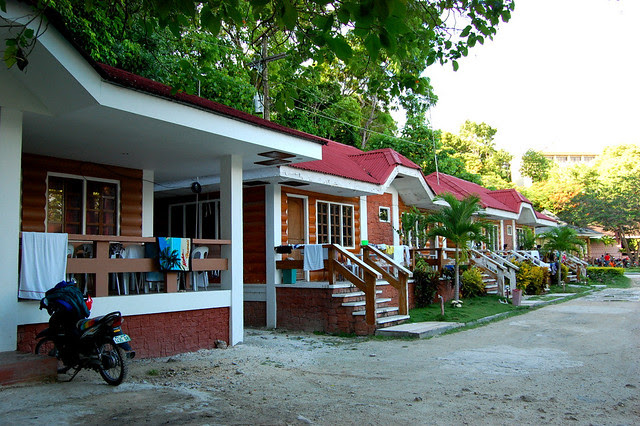 Private room accommodations for rent. A hotel also stands atop a hill in the background.

If there was anything I actually loved about Salagdoong, it was the inland road that lead to the beach. It was fully shaded with trees and the air was noticeably much cooler the moment we made the turn from the highway.

Oldest house in Siquijor
The house, which stood at the edge of the shoreline in the town of Enrique Villanueva, was in obvious disrepair. I'd hardly call this an attraction at all. My guide said it was owned by the town's namesake, who once served as its mayor. 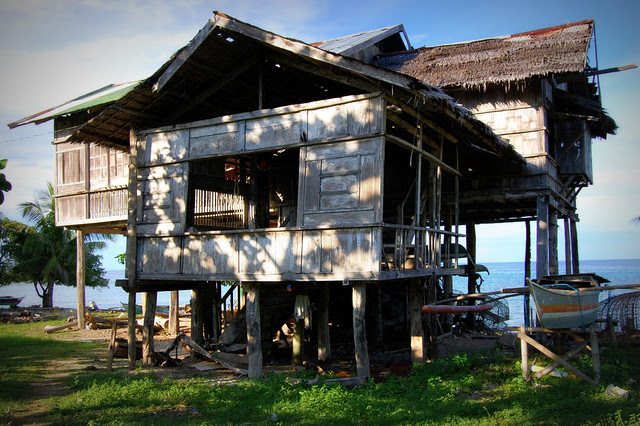 Other attractions
Siquijor also has caves and a marine sanctuary. I think I may have passed by the marine sanctuary, which was populated with mangroves, but I haven't bothered with the caves. Perhaps next time.

Tour rates are regulated in Siquijor. A whole-day tour on either a motorbike or tricycle like I did cost Php 1,000. Other transportation options are available; you can check them out with the nearest tourist assistance center you can find (there's one outside the port in Siquijor town).
#ItsMoreFunInThePhilippines beach historical attractions siquijor spring travel waterfall