Our weekend Tagaytay escape with the cats

June 25, 2012
The extreme lack of pet-friendly hotels here in the Philippines can be quite frustrating for pet owners like me who would just love to bring our furry friends along but obviously cannot. Time and again when going on a vacation or even someplace not that far away, we always have to leave them behind. Last weekend was different, however. As I was booking a room at Sonya's Garden in Tagaytay last week, I chanced upon the FAQs section of their website and noted -- with much delight -- that they allowed pets (which I didn't know about before)! It was a no-brainer; we had to bring the cats.

Our cats rarely go out, and with me and My Bibe being the only two persons they regularly see, they're not used to seeing a lot of people. When at times we bring them out the door at night, they cautiously explore their surroundings but scamper away at the slightest disturbance on the street. Yes, we do need to bring them out more often.

And so last Saturday we packed an overnight bag, brought out the pet carriers, refilled the litter box with fresh cat litter, packed enough Fancy Feast and Friskies, then drove off about 60km to Tagaytay. 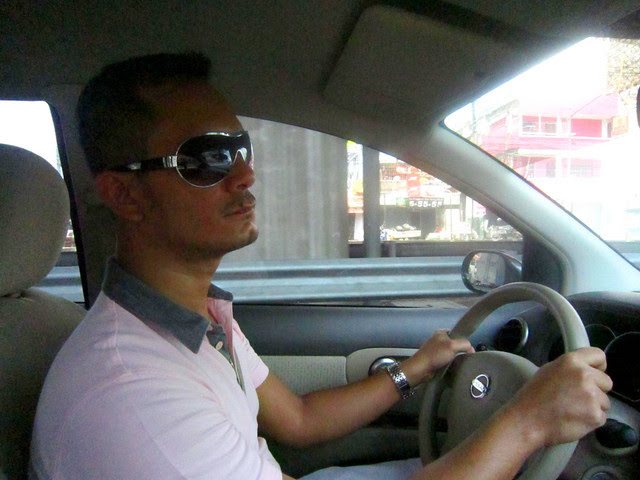 Me behind the wheel, constantly in communication with our cats in the backseat.

We knew the cats would be upset and Foreman (the black one) made sure we knew, who was meowing sporadically throughout the first half-hour of our trip that we had to "talk" to him constantly. Kwittie Boy (the fluffy, white one), on the other hand, was his usual quiet self, letting out only a few meows throughout the drive. 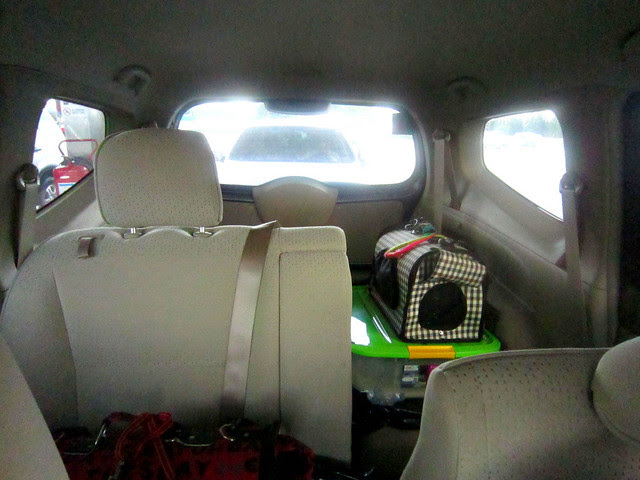 Foreman was inside the checkered pet carrier while Kwittie Boy was in the red one (partially hidden). We later moved Foreman beside Kwittie Boy to lessen his anxiety.

We made a pit stop to gas up and grab some water and munchies. I also used the time to check on the cats, who were both not used to all the noise around. By this time, Foreman was quiet; anxious but nonetheless curious about his surroundings, views of which he can only see through the three mesh windows of his carrier. 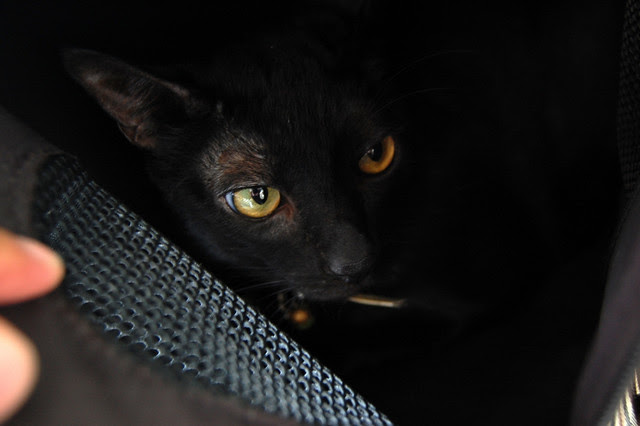 Unfamiliar territory instantly transformed Foreman from the rambunctious cat that he is to this timid little fella.

On the other hand, poor Kwittie Boy suffered from a bit of motion sickness. He clearly isn't used to traveling. He let out a lot of saliva I had to clean him up. 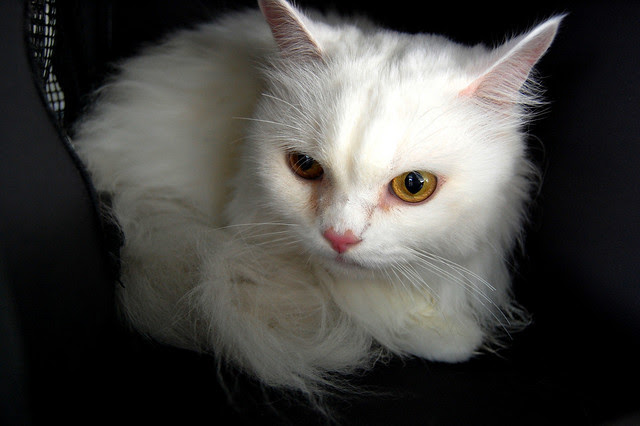 When we finally arrived at our destination, we just took it easy, kicked back and relaxed, with the cool Tagaytay breeze coming through the huge windows and into our large, spacious room. The white paint that pretty much dominates the room, coupled with the really tall ceiling provided a very airy and unrestricted space for us and the cats. 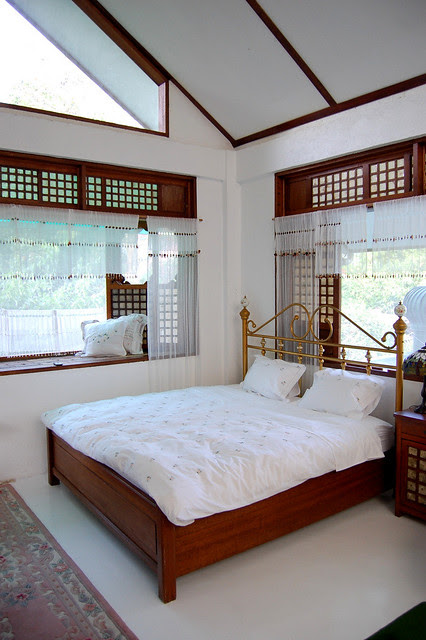 Huge bed. There are also two smaller ones in the room.

The bathroom isn't any less beautiful and airy. 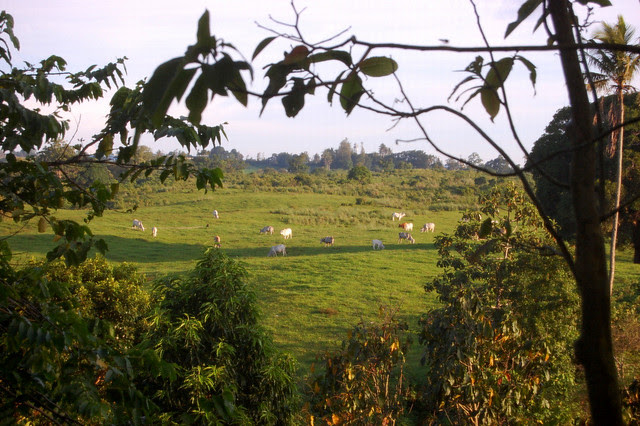 Cows grazing in the distance, as seen from the bathroom. 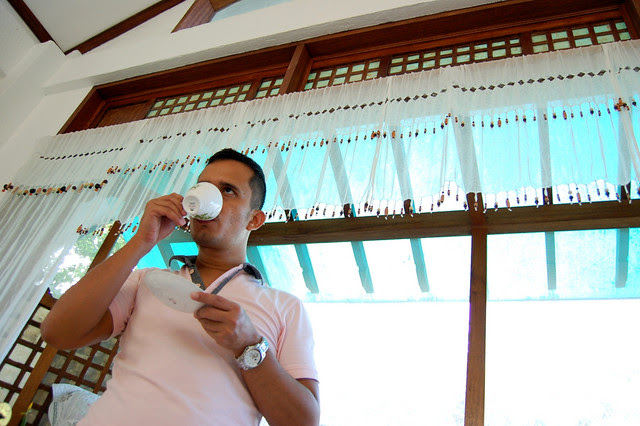 Perfect time to enjoy a cup of coffee. 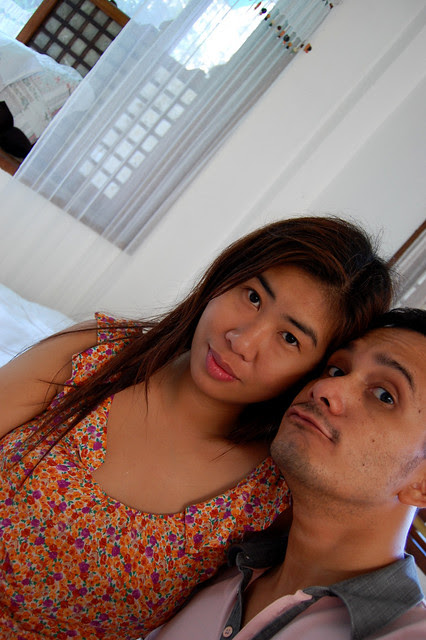 Just having a lovely time together with My Bibe and the cats.

Of course we weren't expecting our cats to feel right at home in unfamiliar territory, so we constantly had to reassure them somehow. Foreman, who normally wouldn't allow My Bibe to hold him tight, was unusually tolerant, so we took the chance to shoot some photos of both them in such "closeness." 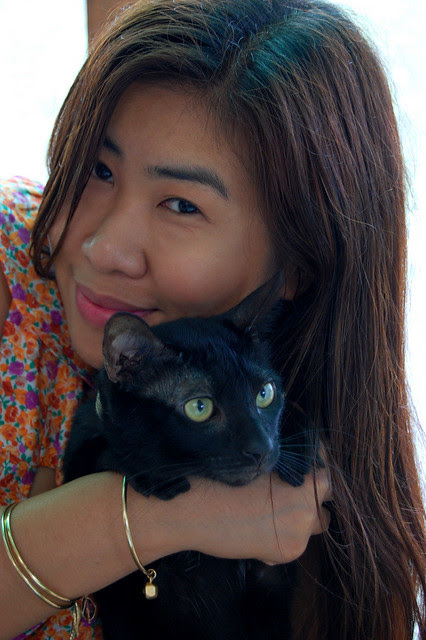 On a normal day at home, My Bibe wouldn't be able to do this to Foreman. I can, though.

The moment we let him out of his carrier, Kwittie Boy instantly dashed for under the bed where it was really difficult for us to reach him. In the evening, though, when it was more quiet, he soon started exploring the room, even climbing to bed with us. Well, it also took a can of Fancy Feast to coax him out of hiding at first. 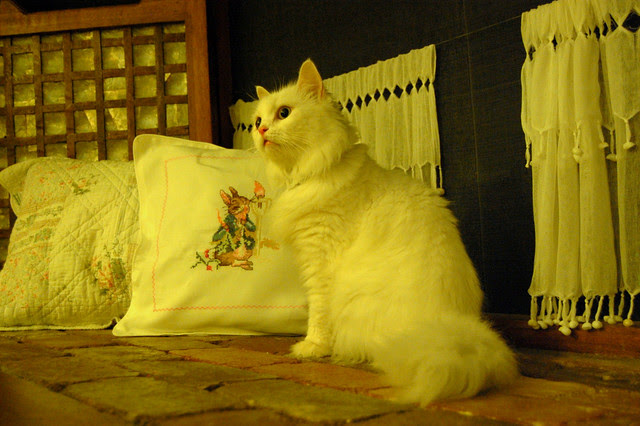 In the morning, however, they were both back under the beds. As we were preparing to leave, we had to temporarily put each of them on a leash so they won't able to hide again in the far reaches of the "underbed" while we were packing. 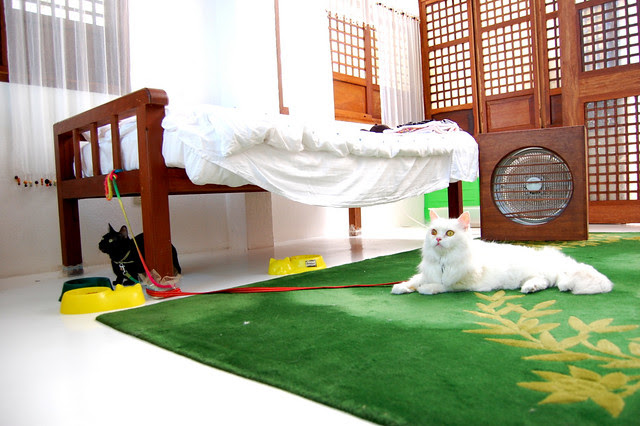 Powerless paranoid kitties, unable to sneak under the bed. 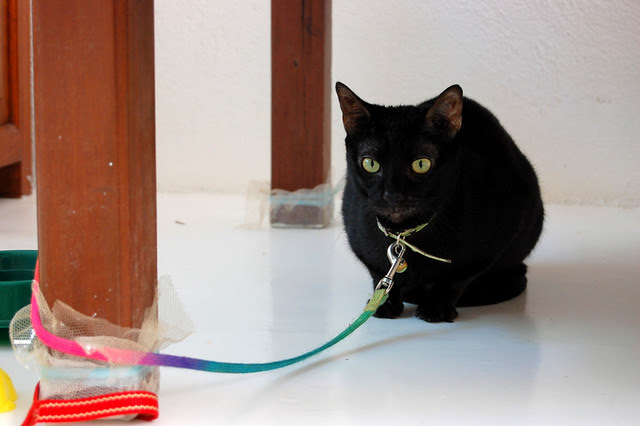 I must say that Foreman was the most uncomfortable. We need to expose these cats to the outside world more.

Before heading back to the car, we let them out into the garden, one at a time for manageability, and on a leash of course. We sure learned our lesson when Foreman once sprinted and hid under My Bibe's house in Malabon, and it took me half an hour to finally coax him out of hiding. 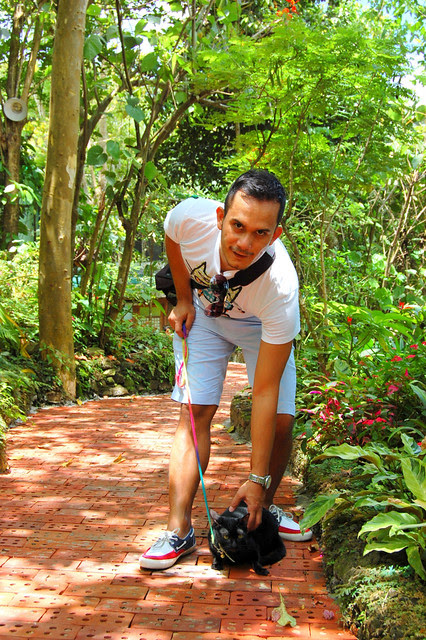 Small steps, Foreman. Soon you'll no longer be paranoid when let outside, and we could take some walks in the park by then. 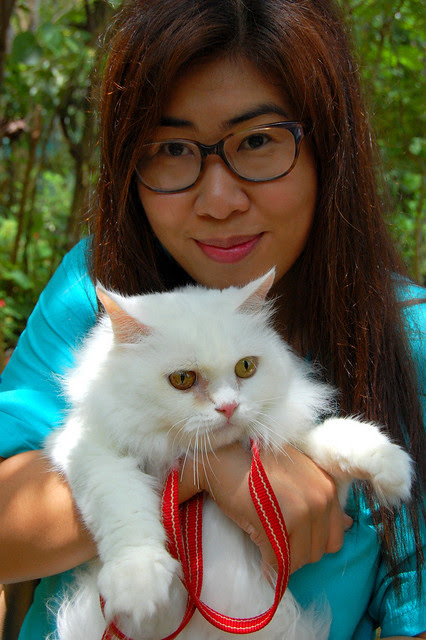 Kwittie Boy with his signature worried look. He couldn't be any cuter, can he?

And so it was time to go. We made no more stops along the way and I was just bent on getting home as soon as possible so we could finally put the cats out of their apparent misery. 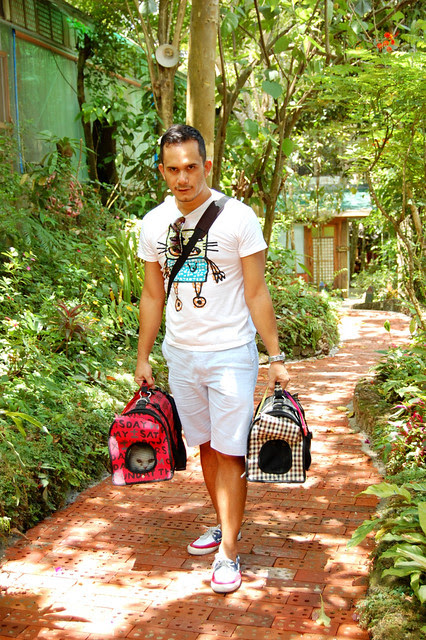 Next week I'm thinking of bringing them to a park or somewhere so they'll get used to being outside. Hopefully on our next getaway to Sonya's Garden, they'll be more at ease already. Meow.

**************
Apparently our cats had a different view of this whole trip. Read their account -- their side of the story, if you may -- here.
cats foreman kwittie boy pets sonya's garden tagaytay travel traveling with pets