September 01, 2012
Yeah, you may think that smileys, frownies, and all those other so-called emoticons are dead. But are they? Think of it. Haven't you used even the simplest of smileys when texting, replying to an email, or even commenting on Facebook? A couple of them are even built into your Android keypad.

So again, are those cutesy little round, yellow things really dead?

In this day and age nearly everything is done in shortcut. LOL. LMAO. BTW. IMHO. We can hardly even spell (but that's another story). Emoticons, especially animated ones, somehow fill a gap in all our shortcut conversations. When we're afraid we might be misconstrued, we automatically add a smiley. A kiss emoticon also sometimes says it all already.

In fact, there's now a treasure trove of emoticons that depict various states of emotion or simply of ways to express oneself. And they're everywhere. They're free. The only problem sometimes is if they work in whatever app we're using them in. Like, do you see a lot of round yellow smileys on tweets? Probably not. But you'd definitely want to add some life into your tweets, right?

Mind you, you can download Twitter emoticons and imagine how from using plain old text smileys your tweets come alive with a little animation. There's also stuff for Facebook, Yahoo!, Chrome, Firefox, and more. Works on Mac, too. 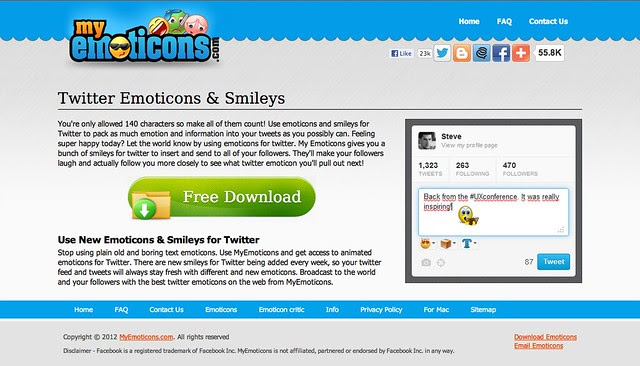 Sure we need to express ourselves a little more in this digital world that we live in, right? And it looks like emoticons are here to stay. :)
emoticons random twitter emoticons