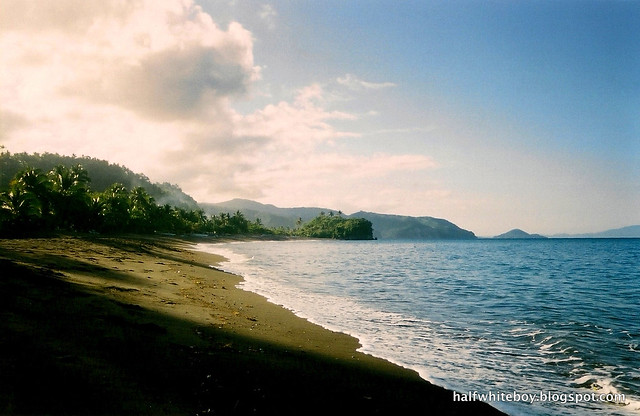 A small neighborhood resides along this lovely stretch of beach in Bgy. Lourdes, Tiwi.

My mind is always on some beach these days and yet my body is still pathetically holed up in the office. I thought about my early trips with My Bibe, back when we'd go to these far-flung areas with no advance bookings or anything. But it was fun, those days.

Back in February 2005 we had one of those trips and Bicol was our destination. It was the first time I saw Mayon Volcano (yeah, poor me) and the butanding (whale sharks) of Donsol, Sorsogon. We wanted to be in some black sand beach for some reason. We tried Tabaco, a town a few kilometers away from the capital Legazpi City, but no one could point us to one. We tried the next town, Tiwi, and savored the magnificent views of Mayon and ricefields along the way.

At Tiwi, no one was sure about any black sand beach but we were told to try the beach at Bgy. Lourdes. We passed by some resort and when our little tricycle trip yielded no success at finding a black sand beach, we drove back to that resort we saw. It didn't have a name then, though the owner said they were to name it California. The Mexican and Filipino couple who own it were based in Sacramento, California, and they told us they just bought the place two weeks prior and it was then undergoing some renovation. We got an air-conditioned room for just Php500 a night.

We proceeded to check out the beach and while it wasn't the black sand type we were hoping for, it was beautiful. 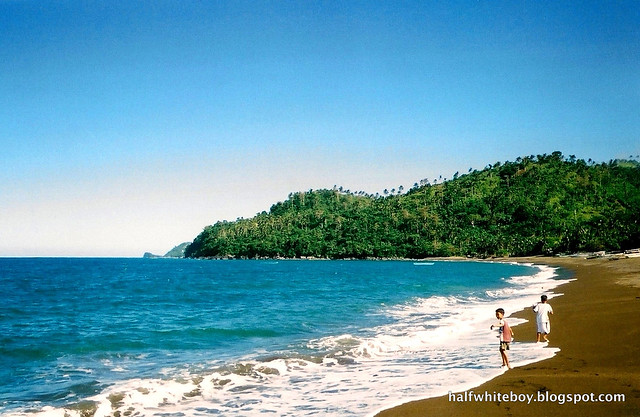 Kids enjoying a lovely afternoon by the sea.

There was at least a kilometer or so of beach bookended by rocky outcrops and hilly terrain. The entire stretch was generously lined up with coconut trees and dotted by small fishing boats. The sand was dark brown with a few grains of black mixed in and had a coarse and porous consistency to it. The sea, on the other hand, was a picture-perfect turquoise. It was a lovely, lovely afternoon. 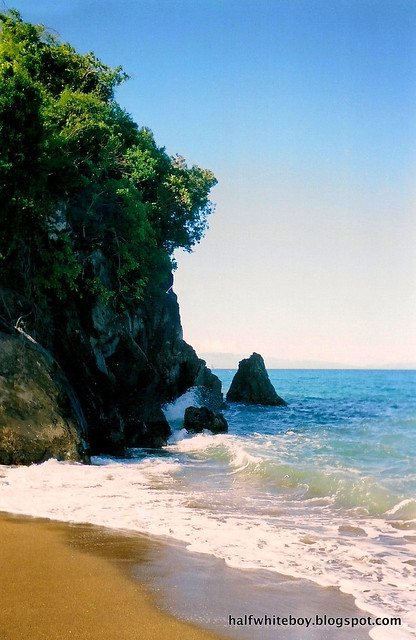 On the edge of glory natural beauty. 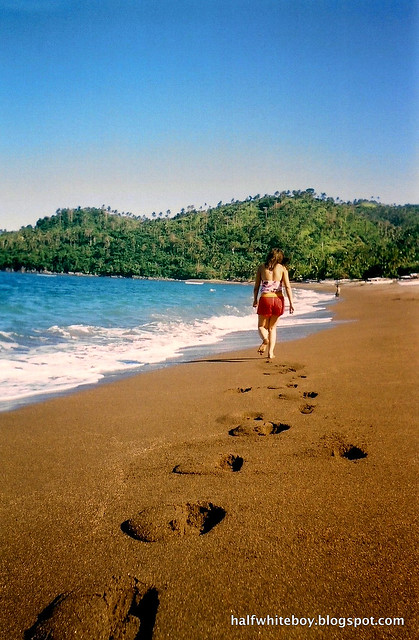 Footprints in the sand. It sure is nice to walk around barefoot here. 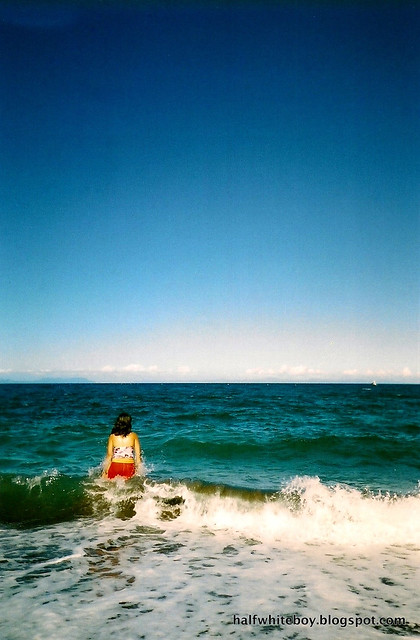 My Bibe about to take a dip. It gets deep quite abruptly, though.

After finishing a roll of film (yes, film), we pulled out our malongs, laid them on the sand, and had a little picnic of chips. After a while, kids started flocking around us, evidently curious about us unfamiliar faces. I get it that they don't get to see a lot of visitors around since it's not really a commercial strip or a popular tourist spot either. There was just a small community living there. They were friendly but shy. 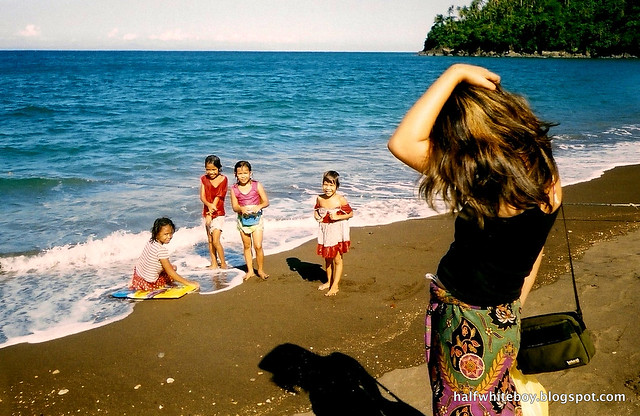 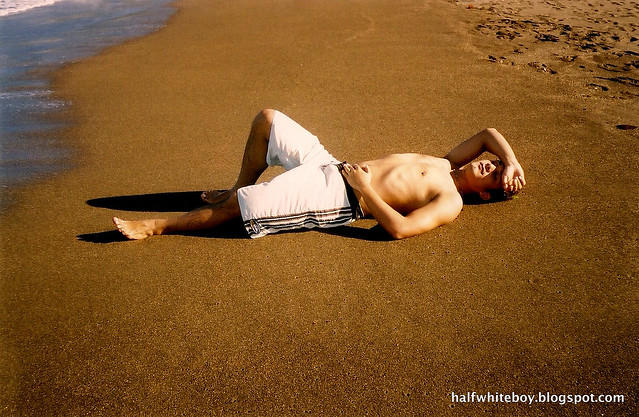 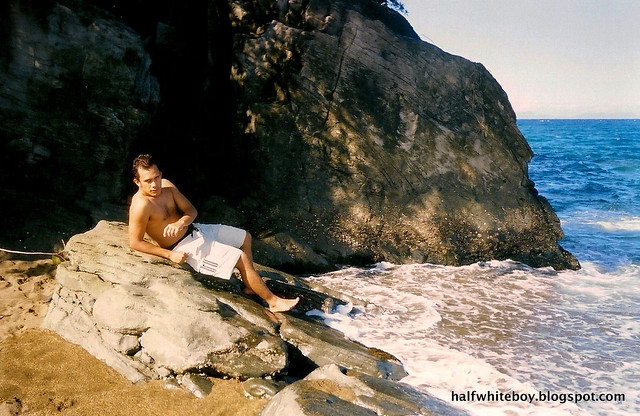 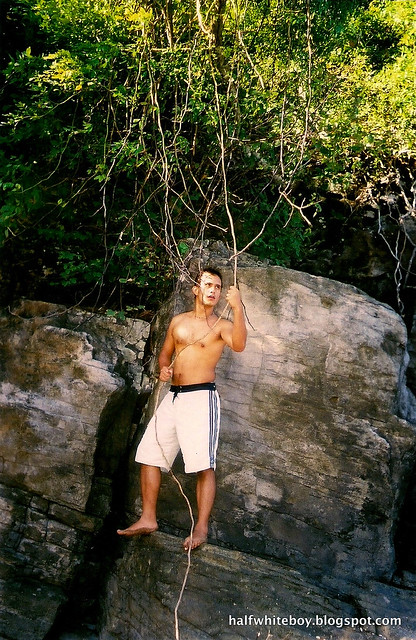 Camwhoring back in the olden days of an ISO400 film and a 600-peso point-and-shoot.

Back at the resort we had some beer, a little chat with the owners, their son (who serves in the US Air Force) and his friends, and some karaoke. A local was hawking some fresh catch and we bought some fish and a crab and had them cooked by the resort staff. 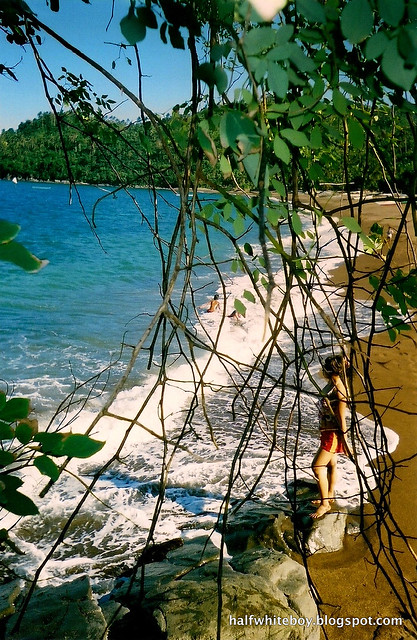 The next day we were off to Legazpi. Time was indeed very limited but it was time nicely spent. We were told about an island an hour away by boat, said to have white sand and a waterfall. But that would have to wait (though it's been 9 years since).