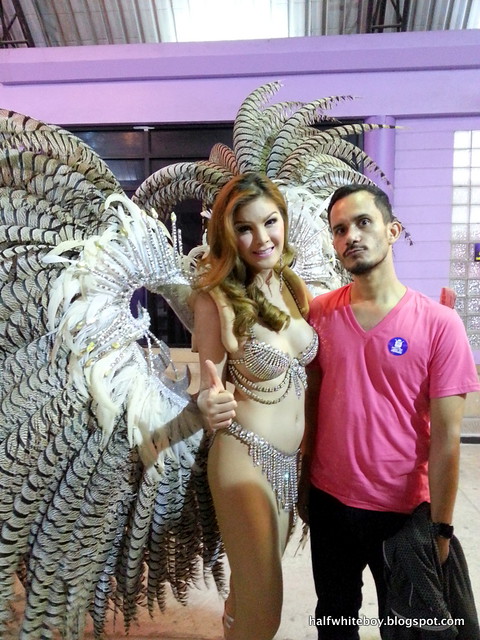 Yeah, I found myself a statuesque lady while we were in Phuket a couple of weeks ago. No wait, it's a boy. No, a ladyboy!

We decided to watch Phuket Simon Cabaret on a whim. We just knew it to be a show featuring beautiful ladyboys lip-synching to some song in elaborate production numbers. Funny how quickly we dismissed the idea of watching it back in 2010, thinking marami namang ganiyan sa Pinas (referring to the fact that we also have a lot of lip-synching gay impersonators back in the Philippines). But after watching the show, I have to admit that Simon Cabaret is on a totally different level.

A VIP ticket, which entitles you to a seat at the orchestra section, costs about 900 Baht plus taxes. On the other hand, a regular seat on the balcony section costs around a hundred Baht less. As with most shows and attractions in Phuket, the ticket price already includes transfers from and back to your hotel. I'm just not sure if there's an additional charge if your hotel is far from Patong, like perhaps in Kamala, Bang Tao, or Mai Khao.

Immediately upon arrival we were ushered in into the lobby to replace whatever receipt or paper we had with "real" tickets (we booked ours through our hotel, BYD Lofts). We soon queued up outside the door to the VIP section although doors only open about 15 minutes before the show. 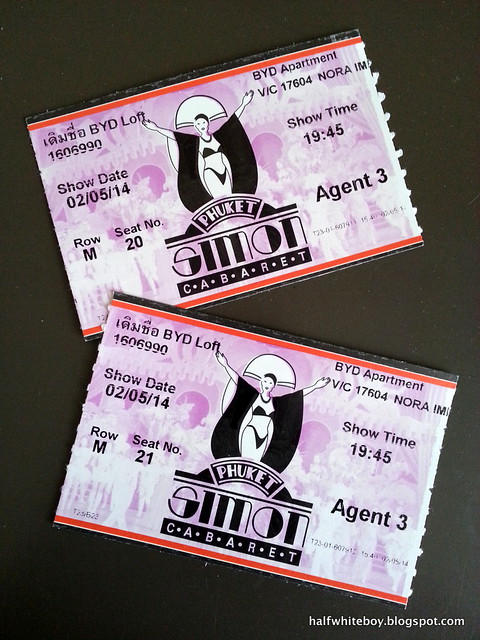 True to its promise of professional entertainment, Simon Cabaret is set in a theater. 4 years ago I thought it was set up like a comedy bar or something and of course I was so wrong. Complimentary bottled water were already ready in our seats although audience members can order beer from the staff around. Cameras weren't allowed during the performances.

The show started promptly at 7:30 (they have another one at 9:30pm) and opened with a parade of the prettiest and sexiest ladyboys in classic skimpy cabaret costumes with an overload of feathers and faux fur all mouthing the lyrics to Simon Cabaret's theme song. There were also some guys who joined them onstage. It was a visual feast.

What followed next was a mishmash of different numbers that ranged from Cher, Cristina Aguilera, Cell Block Tango from the musical Chicago, to Chinese and Korean tunes, to some comedic relief to the tunes of Barbie and I Will Survive. While visually attractive onstage, most of the performers weren't really the best dancers, nor were they good at lip-synching (I imagine Ru Paul would send them sashaying away in a beat), like appearing oh so feminine was all they cared about. There were a few, though, who were good and were all-out in the dance department.

In spite of that, one cannot discount the premium the producers put in their elaborate costumes and stunning epic set pieces, arguably a huge factor in keeping Simon Cabaret entertaining. It was production to the max. But then again, it's really the idea of seeing the most gorgeous ladyboys perform onstage that people are after.

After the 1-hour show, and people found their way to the exits, we found a parade of ladyboys outside, calling out to anyone to have their picture taken with them to the tune of 100 Baht, which was a tip of sorts for them. Naturally people flocked to whom they thought were the prettiest and the sexiest, leaving the not-so-attractive ones in the dust. I felt a bit sad for them but of course I picked a pretty one. Here are a few shots I snapped from my phone: 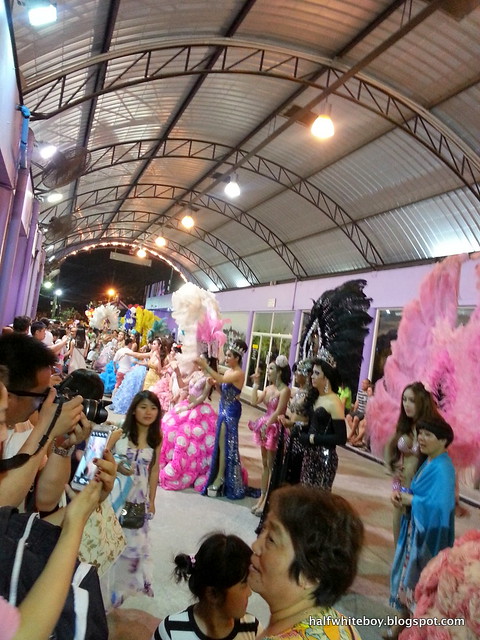 A parade of beauties. 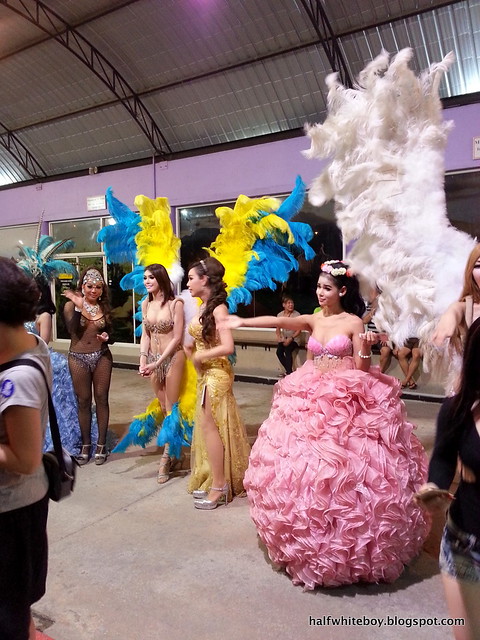 Everyone wants you to pick them for your "souvenir photo with a ladyboy." 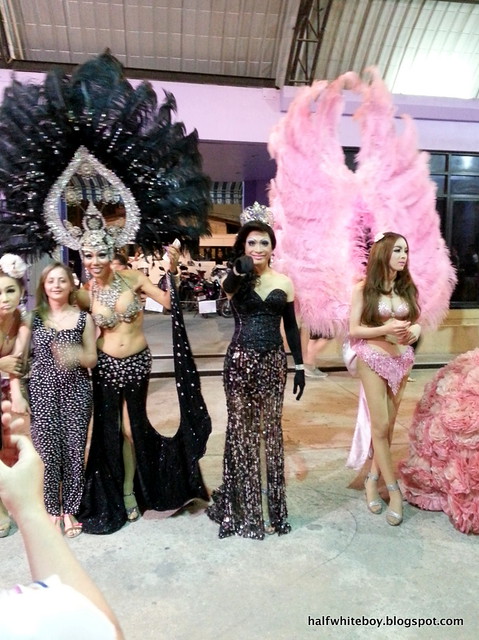 I didn't know Michael V. did sideline jobs in Phuket. (Michael V. is a local Philippine comedian who has a penchant for dressing up as different characters. This one looked just like him, or at least close.) 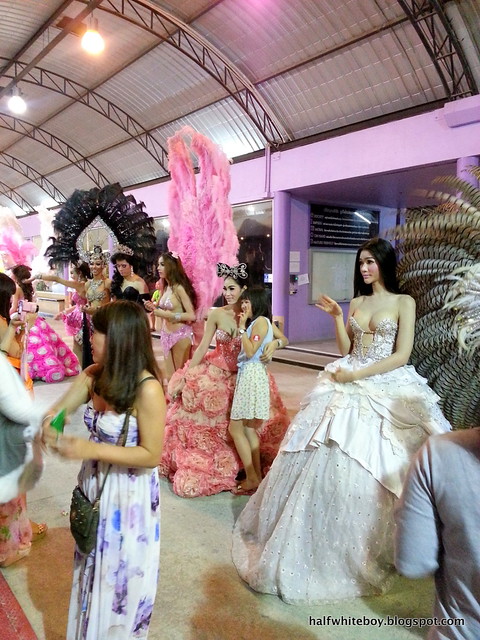 Most of these ladyboys are just so demure. 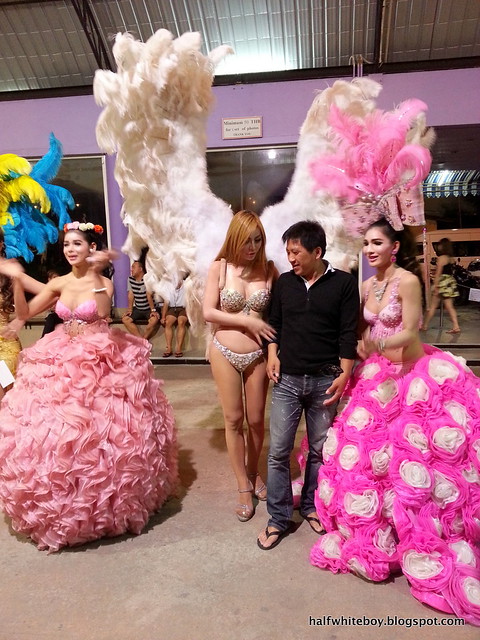 Male tourist uncomfortable in the company of towering beauties. 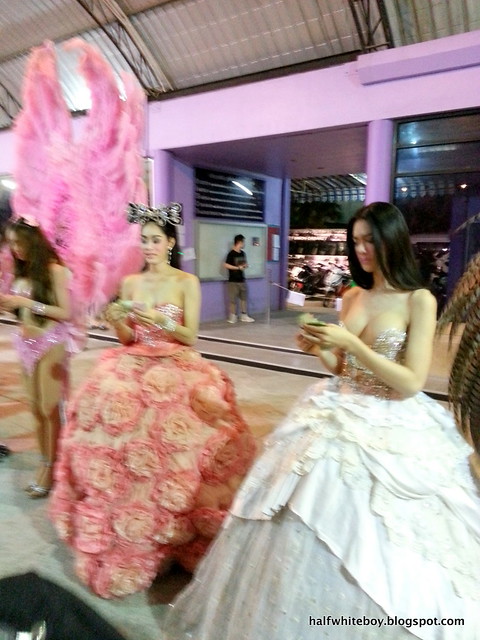 Counting their keep to check if they have enough so they can go back in already. 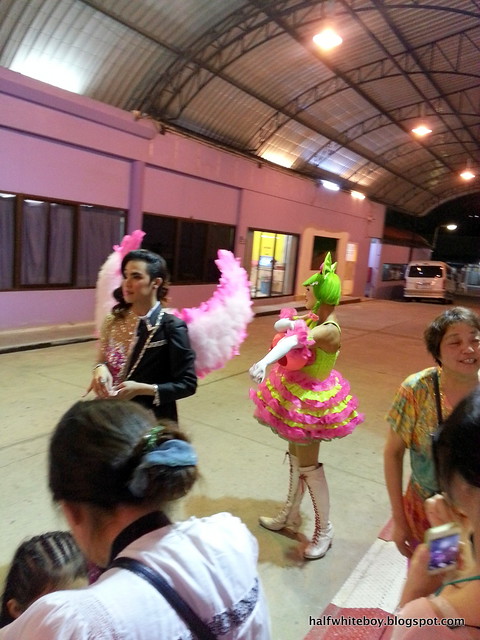 Pity these two. Not many chose to spend their 100 Baht on them.

All in all, Phuket Simon Cabaret is a show worth watching even for once. And I think many other people would agree since this attraction has been going on and going strong since 1991. A visual spectacle with no expense spared, it definitely is one of the things you shouldn't miss when you're in Phuket.

For tickets and more information, go to phuket-simoncabaret.com.