Bringing back the old glory of the Bocaue Pagoda Festival

June 28, 2014
Technically it's called the Kapistahan ng Mahal na Poon ng Krus sa Wawa (Feast of the Holy Cross of Wawa). It's called many names actually but it's arguably the pagoda branding that people recognize the most. As an age-old tradition, the cross that was reportedly fished out of the river in Wawa in Bocaue, Bulacan is paraded annually down the river in a festively-designed pagoda. All this grandness, however, came to a screeching halt on July 2, 1993 when the pagoda gave out and sank in the river, killing around 500 people, mostly children and women.

At the office last Tuesday, the topic came from out of the blue and a colleague who hails from Bocaue told us that their new parish priest is reviving the festivities of old. It's been 21 years since that fateful evening that came to be known as the Bocaue Pagoda Tragedy, and maybe it was time for everyone to move on. 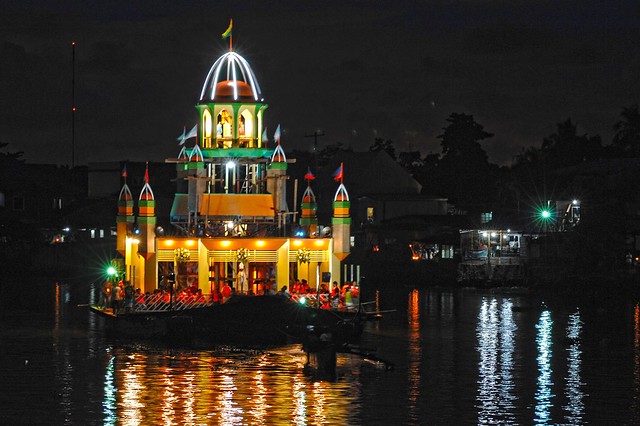 June 27, 2014: The revived grandness of the pagoda tradition makes its way through the river on the first night of the 9-day novena in the Holy Cross's honor. (Photo from St Martin of Tours Parish Facebook page)

Legend has it, according to my colleague, that more than a hundred years ago a fisherman from Wawa found a black cross in the river and brought it home. His family's life soon turned out for the better, which he attributed to the cross that he found. Later more people would join in the veneration until the cross was entrusted to the parish church.

We're not sure how it started but the local community began celebrating an annual feast in honor of the same cross. We're also not sure how the tradition of the 9-day nightly fluvial procession down the river leading up to the feast day came to be, let alone the cross's enshrinement in a grandly-designed pagoda through all this. Locals call this nightly procession ligiran. In addition to the nightly ligiran, the cross and pagoda also set sail on the day of the Holy Cross's feast itself, but which happens in broad daylight this time around.

I found a couple of photos on Flickr of past pagodas. They're photos of framed actual photographs of the pagodas of select years from as early as 1940. Even back then, the pagodas sported some really elaborate designs. 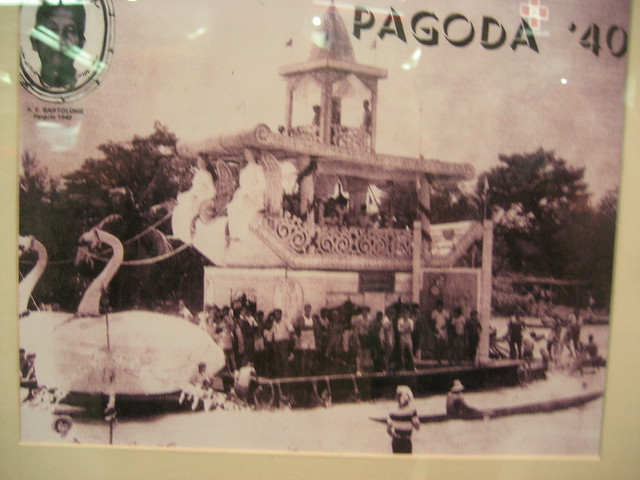 How dainty and whimsical this pagoda was! Look at the swans that were supposedly drawing the pagoda through the river. (Photo from Flickr user Mark Jvlian) 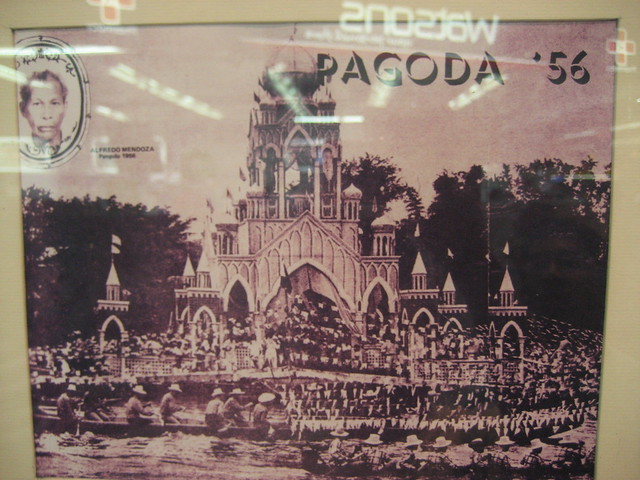 With its cathedral-inspired grandeur, this one here is my personal favorite. The design looks really elegant and majestic. (Photo from Flickr user Mark Jvlian) 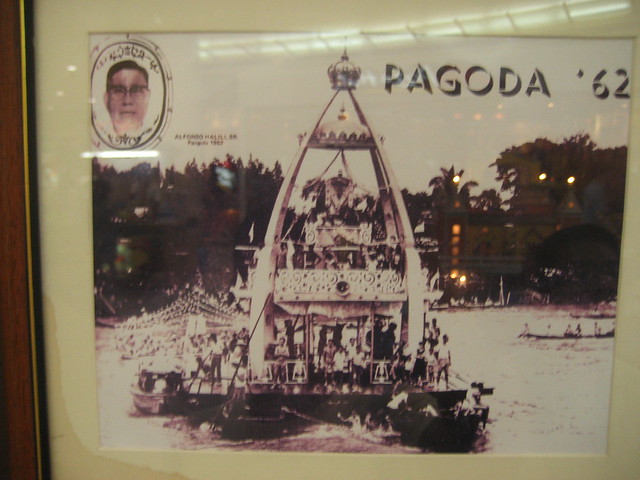 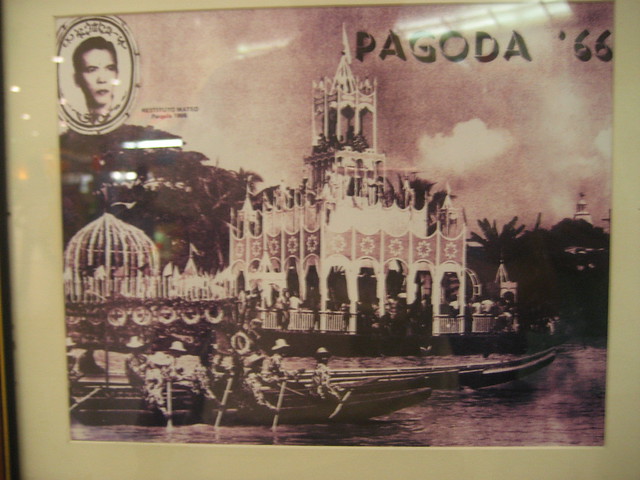 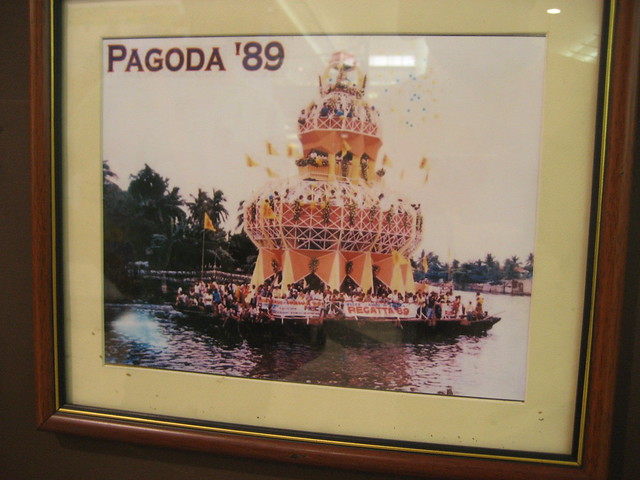 From 1989, which a lot consider Bocaue's most beautiful pagoda. Well, maybe it's because it's from fairly recent memory but from the photographs alone, 1956 is still my bet. (Photo from Flickr user Mark Jvlian)

I can't find any photos of that infamous pagoda from 1993 other than this photographed newspaper clipping. I can't make out the details that much but it looks quite beautiful--except that it was reportedly made out of cheap materials as coconut lumber. Apart from overloading, the use of substandard materials was also blamed for the accident. 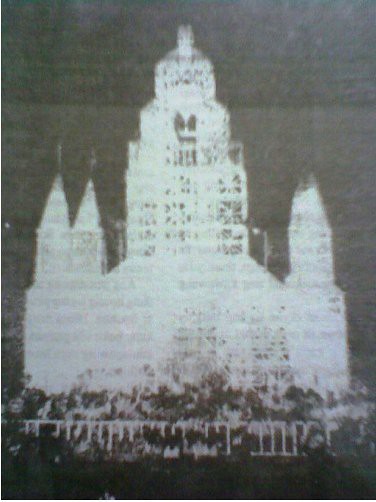 The pagoda of 1993 that ended in tragedy.

The feast is celebrated every first Sunday of July, so this year it will be on the 6th. The annual feast was still celebrated following the tragedy but sans the elaborately designed pagodas, the nightly ligiran, and all the fanfare. There was still some sort of pagoda, though, except that it was drastically scaled down and it was only paraded on the day of the feast itself.

But since the grandness of yesteryear's festival was being revived, I suddenly got interested in this whole pagoda celebration, so much so that I'm contemplating a trip to Bocaue despite the fact that I hate driving. We'll see. I still haven't fully made up my mind yet about that.

Meanwhile, I stalked the parish church's Facebook page for updates on the festivities and the pagoda's construction, its blessing last June 25, up to the first of the 9-day ligiran last night, June 27. Yes, this year's pagoda was back to the scales of festivals past but I personally am not a fan of its design and colors. But hey, that's just me. It's the Holy Cross of Wawa that's supposed to be the main star here after all. 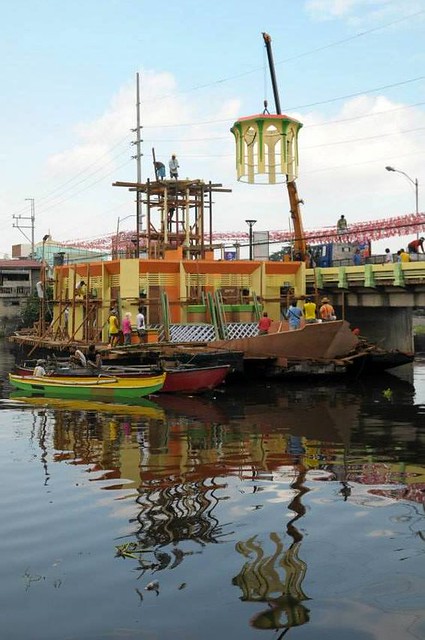 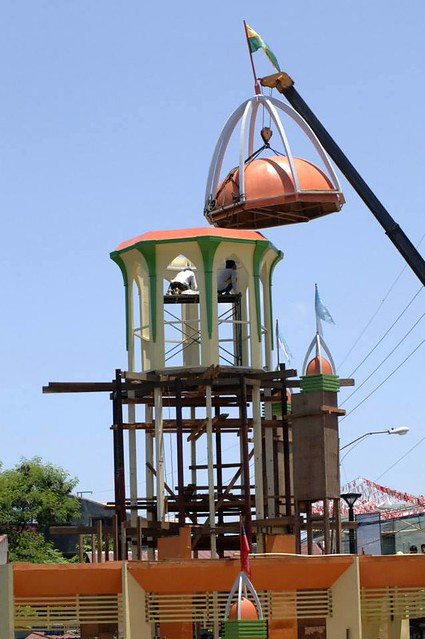 Construction in progress: the topmost parts of the pagoda were lifted by crane before being fastened to the rest of the structure. Must be exciting to watch. (Photo from St Martin of Tours Parish Facebook page)

Personally I'm glad that someone has initiated the revival of this tradition and I believe we've all learned from 1993 so as to prevent another such incident from ever happening again. And fingers crossed, I really hope to witness this age-old tradition in the coming days.