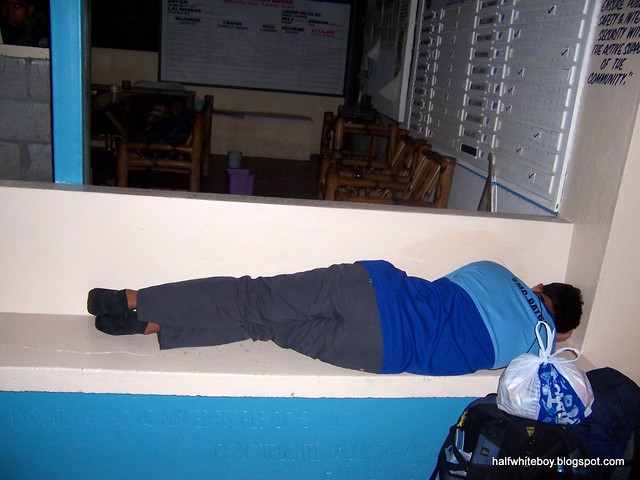 Oh yeah, that's me sleeping in a police station in the town of San Antonio, Zambales in the wee hours of one rain-soaked August morning in 2005. Well, it's not like I was apprehended or something that I had to spend the night in jail. Definitely not. It was probably around 2am and we just got off the bus from Manila, waiting for daybreak before we begin our ascent to Mt. Mabanban.

The mountaineering club we helped establish at our company, I'm happy to say, will be celebrating its 10th year anniversary this Saturday, June 28 at the foot of this very same mountain. I can't help but reminisce the two times I've scaled this mountain, each one with a different story to tell. This post is about my second time, an exploration climb with just four others. It was the height of the rainy season and we basically checked out if it would be a suitable venue for our 2nd batch of inductees, taking into account the logistics, the conditions, and the would-be impact on the mountain.

After breakfast we went ahead with transportation negotiations to the riverbank. There's a river we needed to cross before we even get to the foot of Mabanban. On a normal day crossing it wouldn't be a problem at all but because of the rains, we expected some swelling, maybe waist-deep. Much to our surprise, though, this was what came before us: 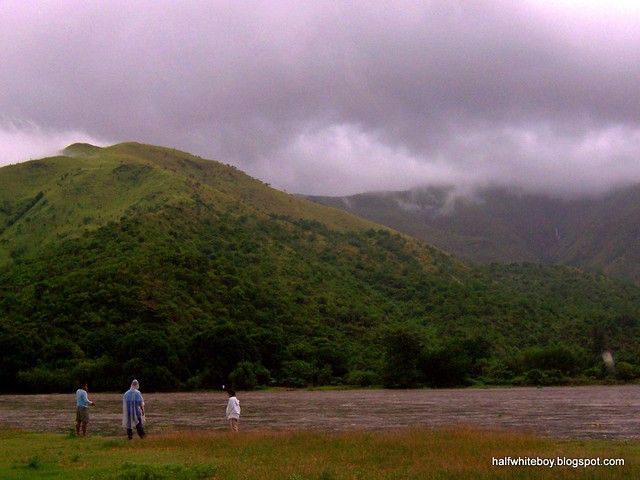 How are we supposed to cross this?

The river swelled beyond our expectations. We could only guess how deep it was but the current was visibly really strong and no amount of skilled swimming can withstand it. Good thing there was a bamboo raft that ferried people across but it could only carry two passengers at a time.

Getting across took some time and needless to say, the rafter's return trip to pick up the other passengers also took time. We thought this was definitely no way to get 30-plus people across the river. Holding on to a rope was also not an option in these conditions. It was simply too risky, perilous even. 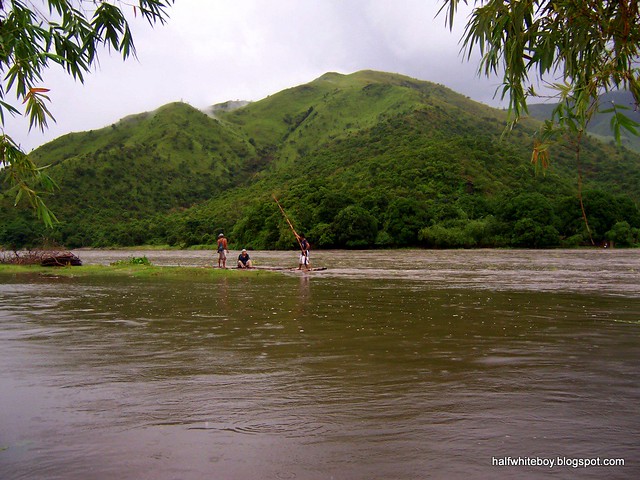 My Bibe traveled solo across the river. 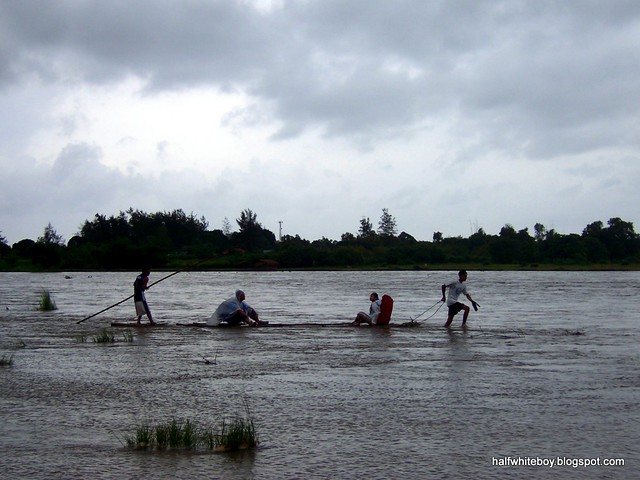 That's me on the left. We just reached the shallower parts of the other side of the river here.

We hired a local as guide because we wanted to establish the best route possible to the top and back (the last time the club was here we bungled up our descent). We only asked him to guide us until midway through the trail, though.

It was raining real hard and the wind was beating on us mercilessly that it felt like there was a storm. Because there were no trees here or anything for shelter, we were totally exposed to the elements. We even had to stop at one point when the rain really intensified and visibility was becoming poor. Completely drenched, we simply stood there on the mountain's shoulder, our backs against the rain that felt like needles, waiting it all out.

In spite of it all, Mabanban was a totally different mountain during the monsoon season. What was usually brown was almost entirely green. We were also delighted to see the gully that we once traversed completely filled with rushing water. 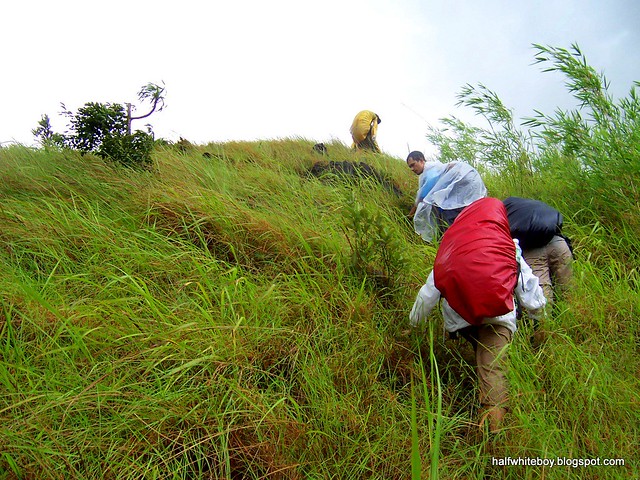 Exposed to the elements we were. 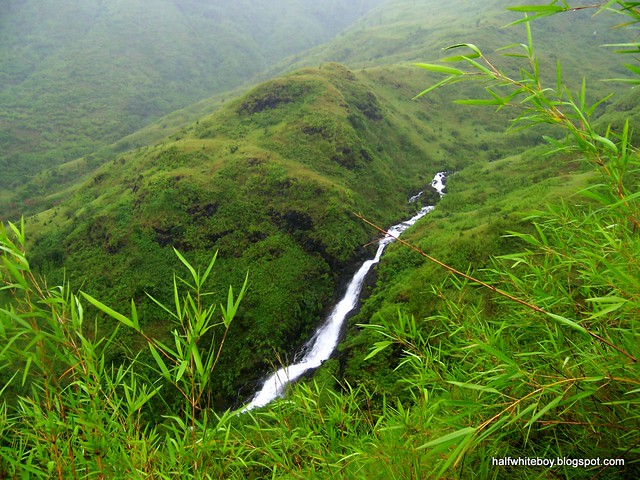 The gully that we once used as trail to escape the punishing heat of the sun was now a waterfall. 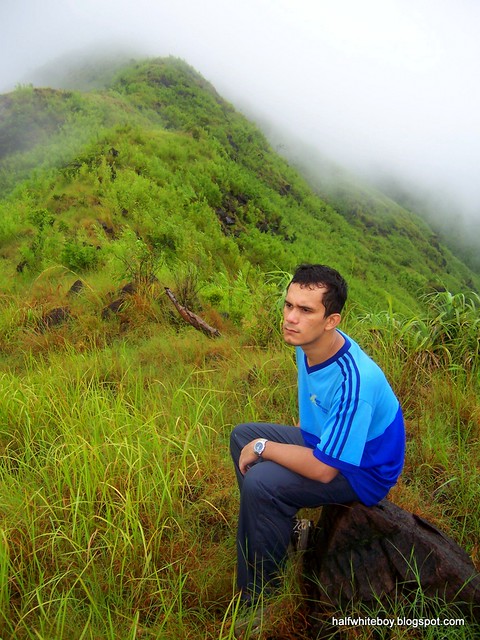 Me contemplating. Why am I even here? 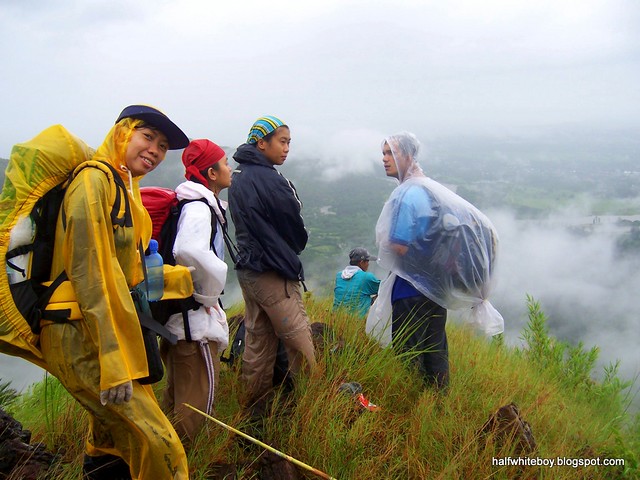 Take five, as we used to say. It's mountaineering speak for a quick rest.

We opted out of our usual campsite and pitched our tents on a spot that wasn't directly in the wind's way. The rains ensued and we had to cook dinner inside our tents. To make things worse, the tent that we borrowed was leaking that we had to cover our feet in plastic just to keep ourselves dry (I wanted a lighter one so I didn't bring my own tent). We really felt sorry for ourselves at that point, so much so that we questioned why we were doing that whole explo-climb and why we were even there in the first place. Nevertheless, we made it through the night.

Our descent the following morning was fairly quick and our guide met us halfway through. He led us through a different trail this time and we were treated to waterfall sightings and all.

We had to be careful, though, as the soil was loose because of continued rain. It was another factor we took into account in deciding against this mountain for our Batch 2's induction climb. Even when there were just 5 of us then, the soil was already eroding that you can't help but divert from the path already marked by the trail master. Now imagine 30+ people! Low-impact mountaineering it ain't gonna be. 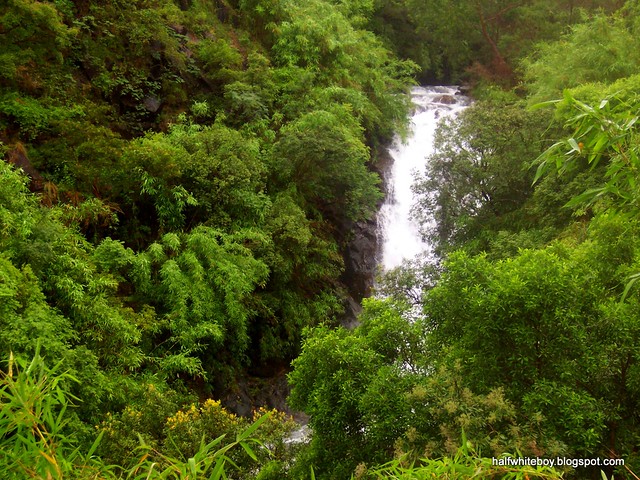 Mighty cascade! We enjoyed some really nice views during our descent.

We also saw a spaceship. 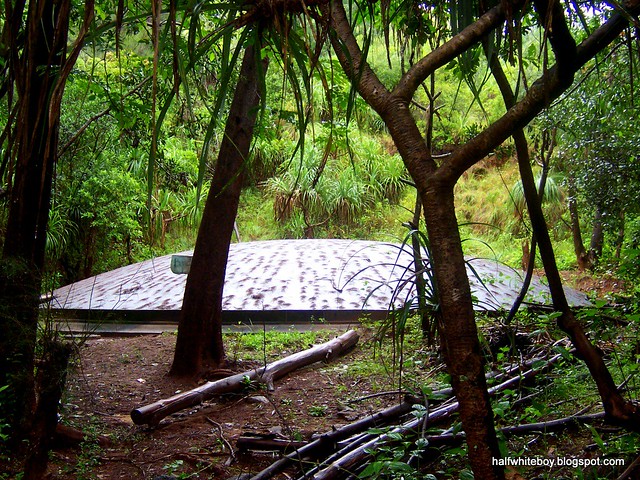 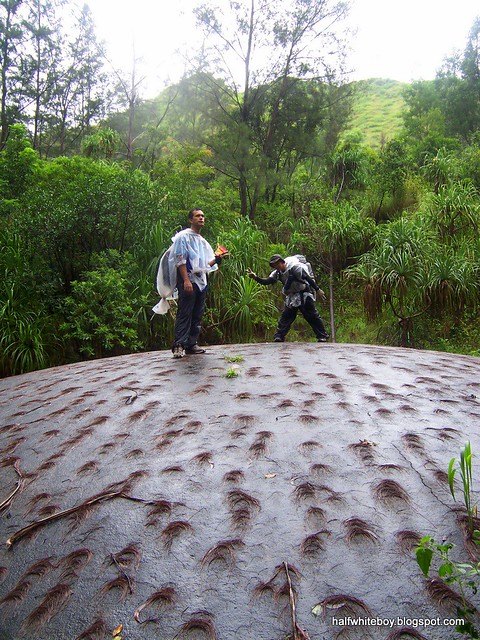 Sorry, but we were denied any close encounters with the third kind.

But of course it wasn't. We were told it was an old water tank used for the town's water supply but which was no longer operational. Anyway, we just loved it's shape. 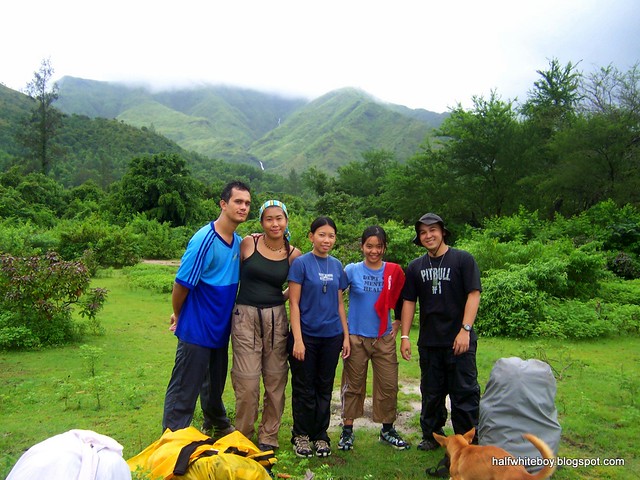 The 5-man exploration team in our "Quest for the Lost Trail." Our conclusion was that there was no one trail at all. 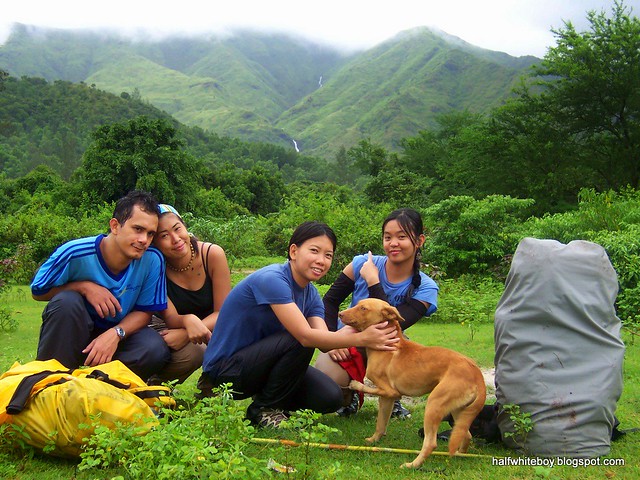 My Bibe was just relieved to be off the mountain as she was sneezing the whole time--all throughout our descent. Poor thing. And damn those allergies. 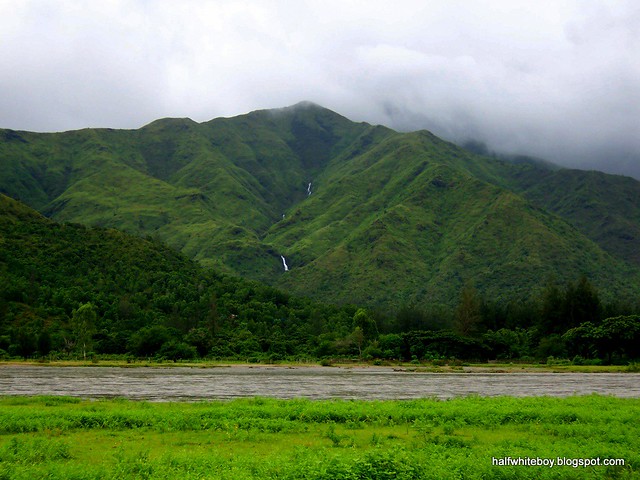 Mt. Mabanban will always be one of my favorite mountains.

We made it down safely and went through the whole two-at-a-time bamboo raft trip across the river again. We returned to the police station to take a bath, get dressed, and while away time before our commute back to Manila. 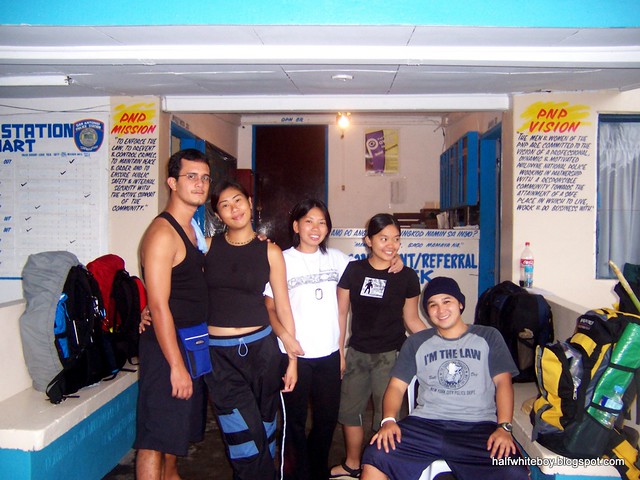 The gang, all safe and dry. 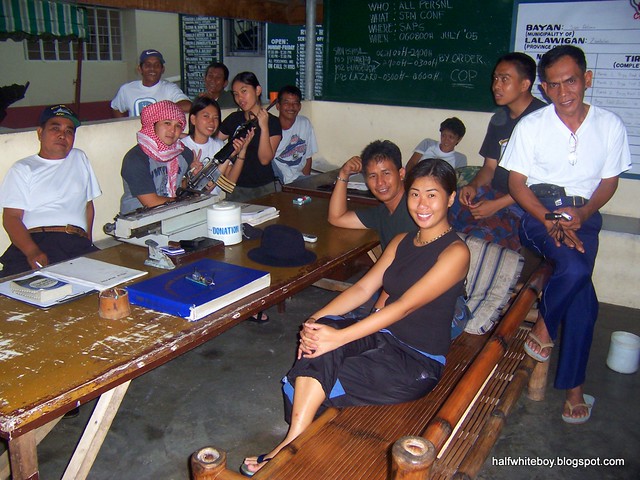 Well, we also hung out with the policemen at the station.

Despite the hardships, not to mention what we did was actually tinged with danger, it was a nice and still fun trip that we had, one that we'll probably always remember fondly.

And to the Smart Mountaineering Club, cheers! Here's to many more years of fun, camaraderie, responsible mountaineering, and community service!