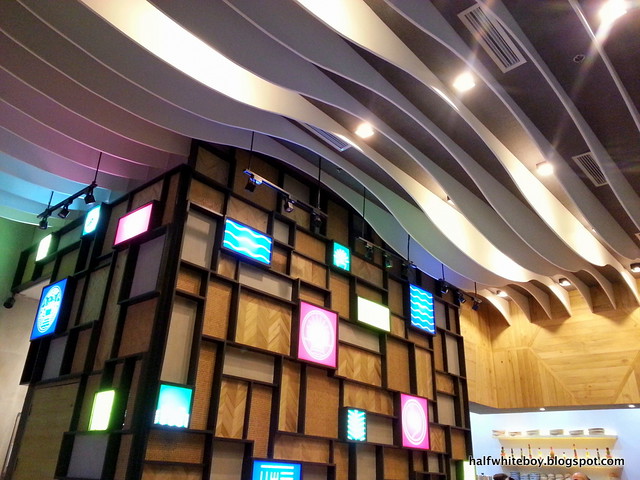 Touches of color on Sabao's native-inspired walls, with a contrasting whimsical ceiling to boot.

We got to try out newly-opened Sabao Filipino Soup Bar last week. A sister restaurant of next-door neighbor Bait''s Seafood Kitchen, Sabao has set its sights on Filipino cuisine, particularly on traditional soup-based dishes, or sabaw in Filipino.

Now how was it? Let me answer that.

Interiors and ambiance
As with Bait's and practically all other establishments on the ground floor of Signa Designer Residences, this restaurant has a really high ceiling and with half of its perimeter surrounded by glass panels that afford it an airy and less restrictive feel.

Sabao also has a nice, uneven accent wall that takes inspiration from traditional Filipino materials like sawali (interwoven bamboo splits) and banig (woven mat). They didn't necessarily employ such materials, though, but instead used other implements to afford the same effect, or at least some semblance to it. The inclusion of light boxes likewise adds to the overall updated look.

The wall is also neatly complemented, if not contrasted, by a whimsical ceiling of curved wood panels in white. I like the resulting effect actually. 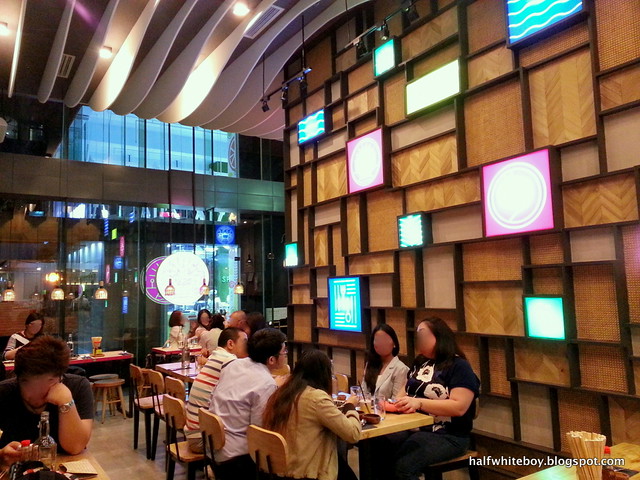 The wall is an updated take on traditional Filipino materials. 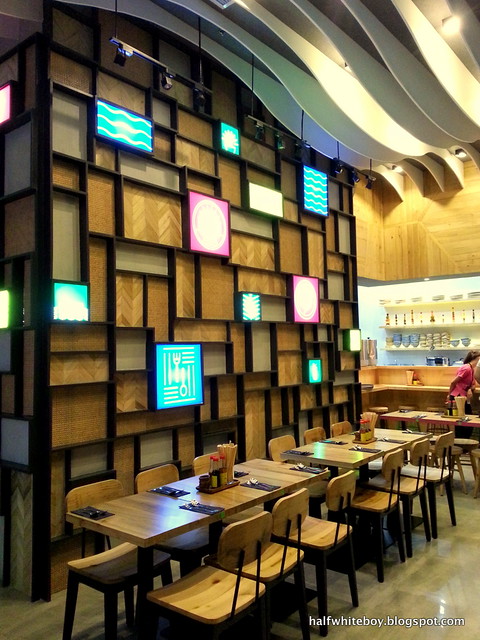 Behind this wall is the kitchen and a common restroom. 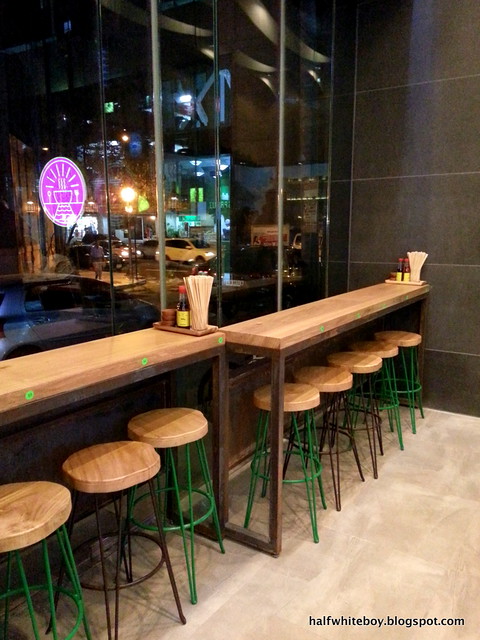 Tables for those dining alone. 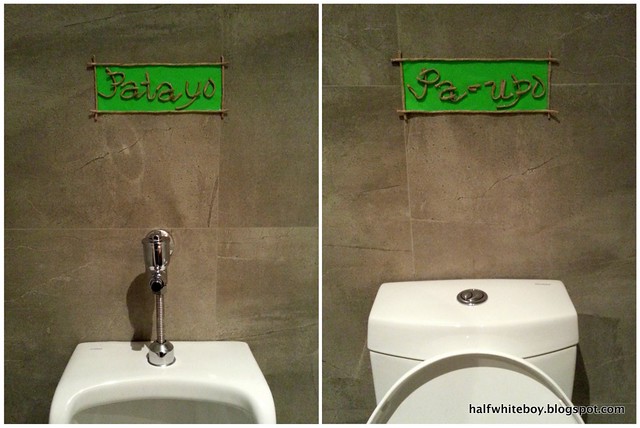 Was amused with the signs in the common restroom, which mark the right toilet/urinal according to the way you do it. (Patayo means standing up; Paupo, seated.)

I find the light wood tables a bit too small, however. I also don't like that most of the chairs are stools. It could be just a preference but I want backrests on my dining chairs. Those little native lamps are cute, though.

The food
Sabao has an interesting menu, one that's arguably lifted from ramen houses where you build on a base soup, which in this case can be either bulalo, tinola, sinigang, molo, or binakol, with a variety of add-ons that include rice, noodles (yes, noodles with Pinoy soup!), veggies, and several other toppings. As with some ramen spots, the order slip is checklist-style that you get to fill up yourself. I must admit that adapting such a concept for traditional Filipino fare proved to be quite refreshing.

Each bowl is good for one person only but the waiter was quick to suggest that it can be for sharing, a typical practice among us Pinoy diners. Anyway, we tried their bulalo (Php 326) and sinigang with sampaloc-glazed pork belly (Php 324), both with garlic white rice (Php 65) on the side. 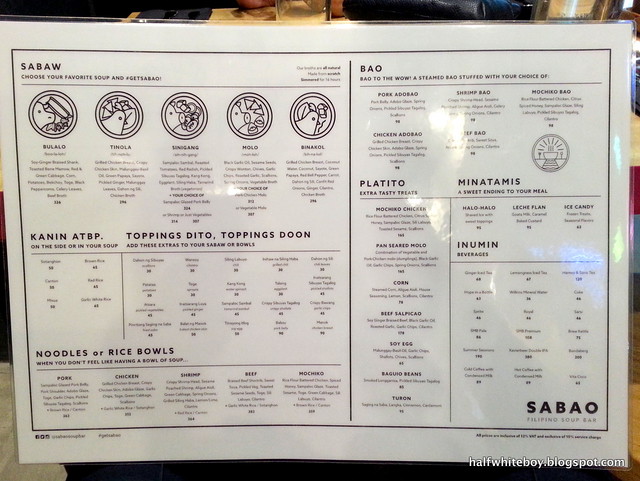 Their serving size is akin to most ramen bowls that are indeed meant for one person only but may already be a lot for some, hence the "can be for sharing" suggestion (We do love to soak our rice in a sea of soup, don't we?). This way the food's expensive price point is cleverly masked, however subtly.

Both bulalo and sinigang were good and I was surprised by the complex flavors I wouldn't normally expect from such dishes. I mean, common, just think of the spices that typically go into your bulalo; not a lot actually. I don't know what stuff they've put into their soup but I like how Sabao has elevated the Pinoy sabaw to a level that's somewhat comparable to more complex-flavored dishes from our Asian neighbors.

Apart from the meat, each bowl of bulalo comes with a halved bone marrow that's pleasantly not mushy (cholesterol alert!). As for the sinigang, it tasted like real sampaloc (tamarind) was used. Interestingly, the bowl was also laced with sampaloc sambal. With all the sampaloc in it I found the soup too sour for my taste although Kwittiegirl was just fine with it.

How they do garlic rice is also worth noting. Instead of frying the rice in garlic and oil, or even simply topping a cup of rice with bits of toasted garlic, it looks like the garlic, cut into thin strips, was mixed with the rice while it was cooking in water. The result is a moist -- bordering on mushy -- pile of carbohydrates with a strong garlic flavor. 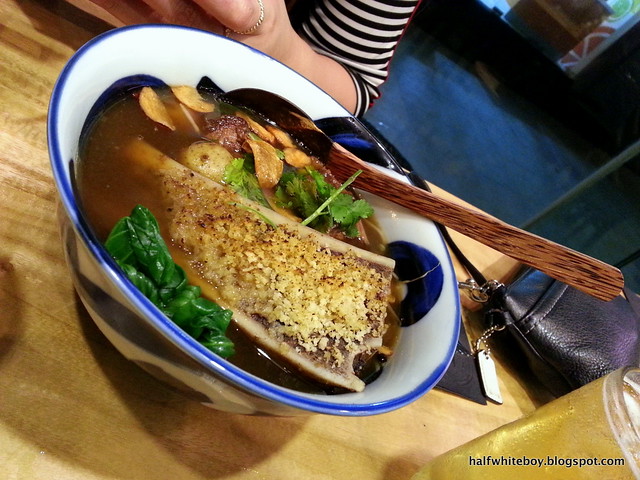 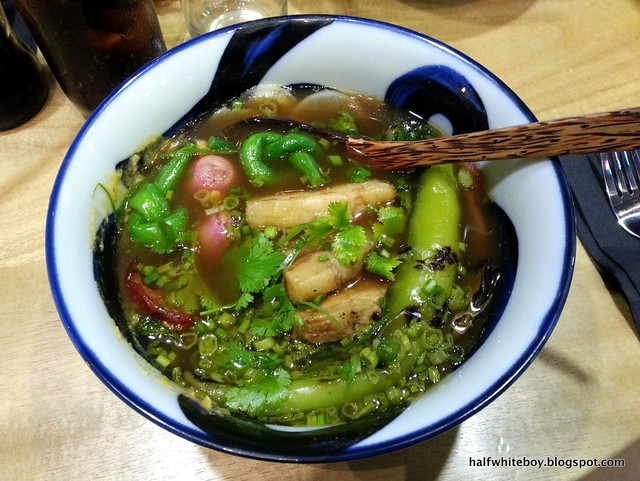 Sinigang with pork belly. Available in a shrimp or vegetable-only option, too. 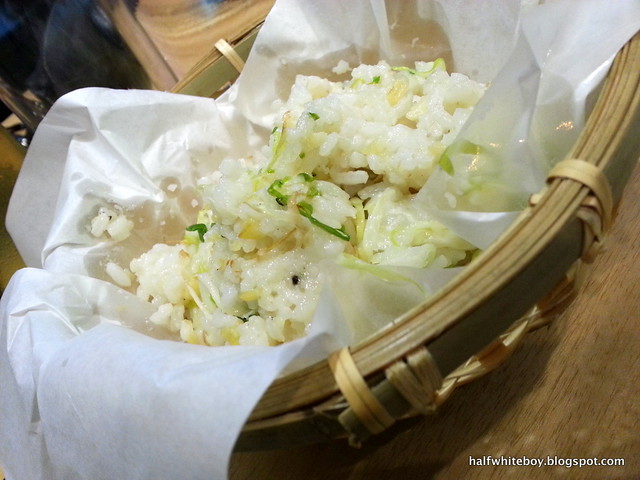 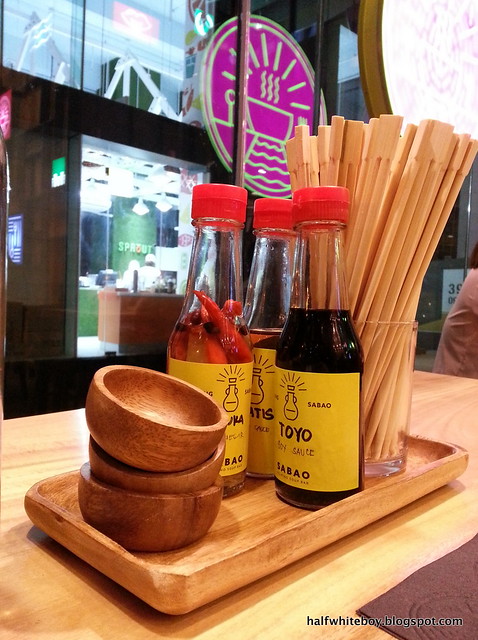 Each table is ready with these condiments.

On a different night I opted out of soup and tried one of their rice bowls in their stead: Mochiko (Php 359), which contained rice flour-battered boneless chicken, spiced honey, sampaloc glaze, and a host of other things. Sadly I was underwhelmed. While I understand the chicken was battered, I was expecting it to be fully glazed, something sweet and sour because of the combination of honey and sampaloc. It turned out to be just a lonely drizzle across the four pieces of chicken.

It's also unfortunate that most of their dessert items are still not available, so we ended up with their version of turon, or fried banana wrapped in lumpia wrapper. With only three small triangular pieces, it sure was pricey at Php 95. But then I liked the sweet and citrusy glaze peppered with cinnamon. 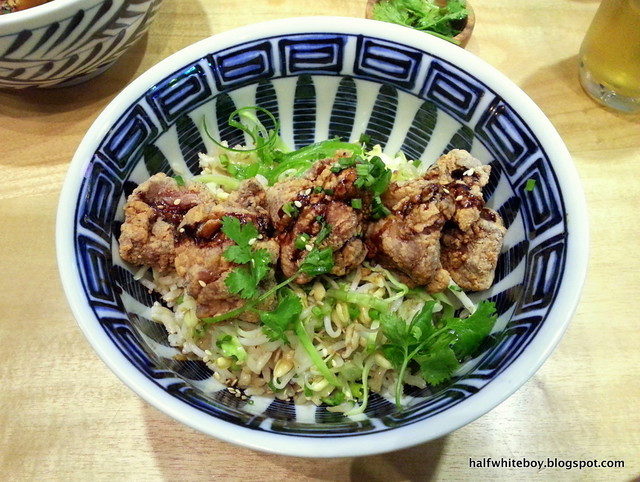 The underwhelming Mochiko. I'm sticking with soup next time. 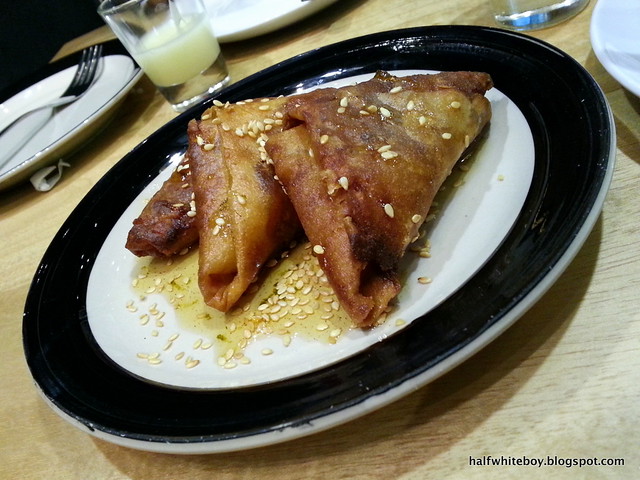 One other thing I lament at this restaurant is how small their drinks are. The lemongrass iced tea, for instance, though good, was served in a teeny weeny glass at Php 67. Care for some soda? Your Php 46 will only get you a Coke Sakto. Common, give us at least a can!

Update:
On few succeeding visits we tried out other items off their menu. After my disappointment with their Mochiko I was glad that the other rice bowl I tried -- beef (Php 382) -- was much better. The braised beef was flavorful and tender but I wish there was a wee bit more sauce to coat my rice.

Because on one occasion they ran out of bulalo and sinigang, we ended up with tinola (Php 296). It was good tinola and as with their other soups, also had some complex flavors. My only lament was the papaya, which was not cooked through. I understand veggies ought to be crunchy but it just doesn't apply to papaya, sayote, or potatoes for that matter.

Another dish we tried was beef salpicao (Php 178). I thought it had a tad too much oil but the meat was tender and packed a healthy dose of garlic flavor. The chef sure didn't scrimp on that ingredient. 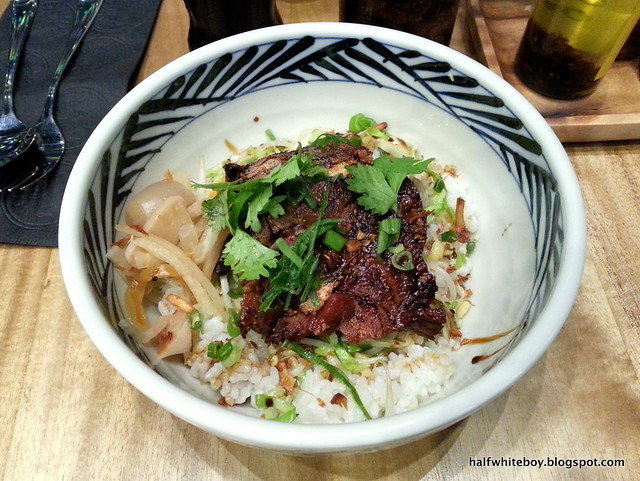 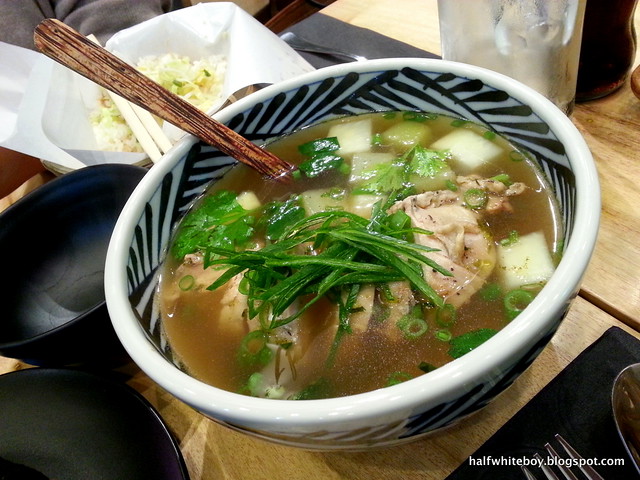 Tinola: good but was disappointed with the undercooked papaya. 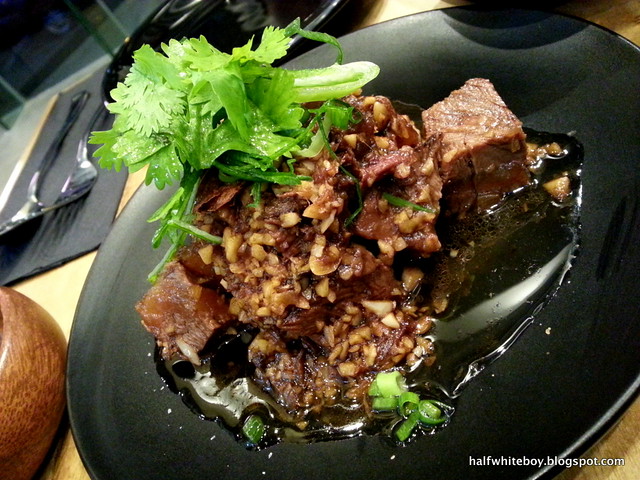 Beef salpicao -- with tons of garlic. 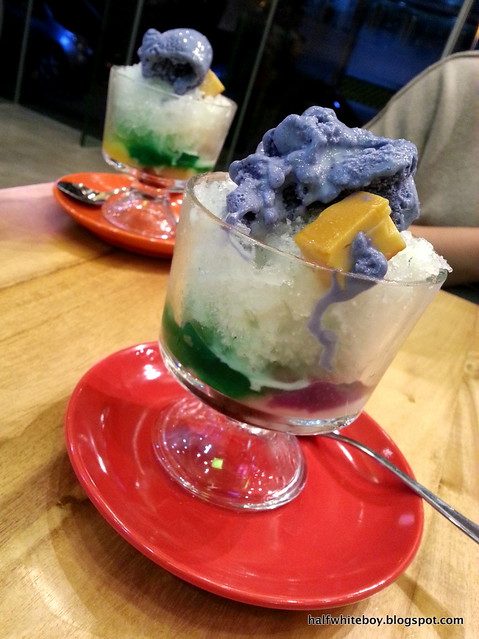 The halo-halo is finally available.

After having to settle for turon each time, the halo-halo (Php 95) -- which had been on the menu since Day 1 -- was finally available on our last visit. Well, I found the serving smaller than what I'm accustomed to; instead of a tall glass, Sabao serves it in a short glass.

Because of how this restaurant has reinvented traditional local soup dishes, I was expecting the same with this popular Filipino dessert. Well, maybe not as fancy as The Goose Station's halo-halo but still I was hoping for a twist. Unfortunately that wasn't the case. It's just your typical halo-halo with banana, red beans, jackfruit, nata de coco, and kaong. The ice was crushed, not shaved, so melting it took a while. The ube (purple yam) ice cream on top of it was really good, though.

Service
The time it took for our orders to arrive wasn't much, so it's good. The waiters, while courteous and all, tend to border on the intrusive side, which is something I don't like that much. They seem to be much perkier than their cousins at Bait's but ironically aren't also attentive enough to customer calls at times. 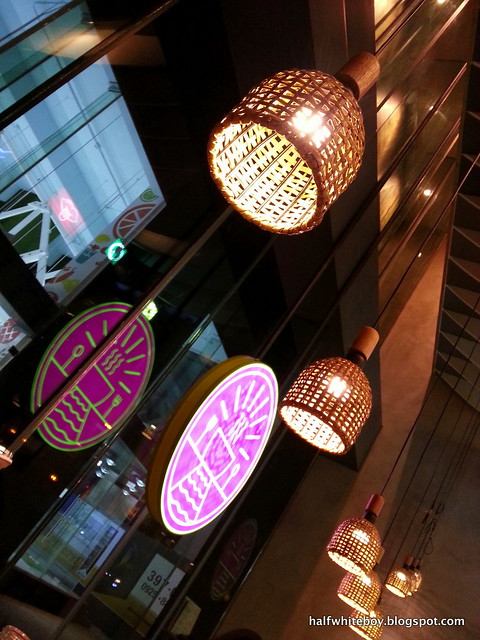 Also, please note that they only accept cash payments at the moment.

*************************
In hindsight
Although a bit pricey, the food's mostly good. So despite my minor beef with the intrusive yet ironically inattentive waitstaff, I can very well see myself dining at Sabao again. In fact I've been here twice already. It also doesn't hurt that the restaurant is just a few steps from our office, so it's a rather convenient option personally.

But please, I do hope they reconsider the size of their drinks. Seriously.

*************************
Sabao is located at the Ground Floor of Signa Designer Residences at Valero cor. Rufino Streets, Salcedo Village, Makati City. It's just right next to Bait's (near Smart Tower) along the Valero Access Road, to be exact.

They're open daily from lunch until around 10 or 11pm (I'll get back on the exact operating hours).