FRAGRANCE | Soft by Al-Rehab is no softy at all 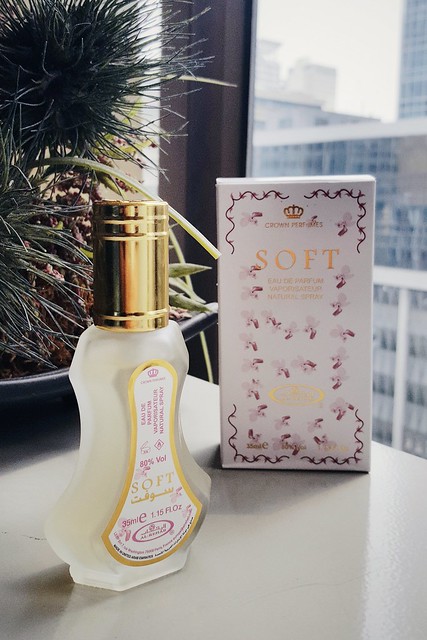 Because Armaf's Club de Nuit Intense Man was such a hit with me, I'm here trying out fragrances from other houses from the Middle East. And my, is it a whole new world out there!

This post is about Soft by Al-Rehab, which is marketed as a unisex fragrance. It's a pretty nondescript name for an EDP, with cheap packaging to go with it. But don't be fooled because it's a cheapie that packs quite the punch.

Contrary to its name, Soft opens really strong, with an unmistakable sweet, sugary accord that dominates the fragrance well into the drydown. There's also something citrusy and earthy about the opening, perhaps with a hint of floral somewhere in the background. While this stops Soft from being totally cloying, the projection is still predominantly sweet.

Soft projects like a beast, especially in its first two hours or so, so be careful with the trigger on this one, else you'll be followed by a thick cloud of vanillic, caramelized sugar for quite some time. But Soft does soften after a couple of hours while still retaining its sweet characteristic in the drydown. This fragrance lasts really long, on clothes especially.

All in all, Soft is not bad at all for a cheapie. It's quite good actually, especially if you're into sweet scents. Although tagged as unisex, I think most people would find this leaning more toward the feminine side. However, it's still unisex enough for me that I can wear it without hesitation.

And in case you're wondering how cheap of a cheapie this juice is, I got mine from a seller on Facebook for just Php 350 (35ml spray bottle). Boom!