FRAGRANCE | Alizarin EDP by Penhaligon's: Strong but not strong 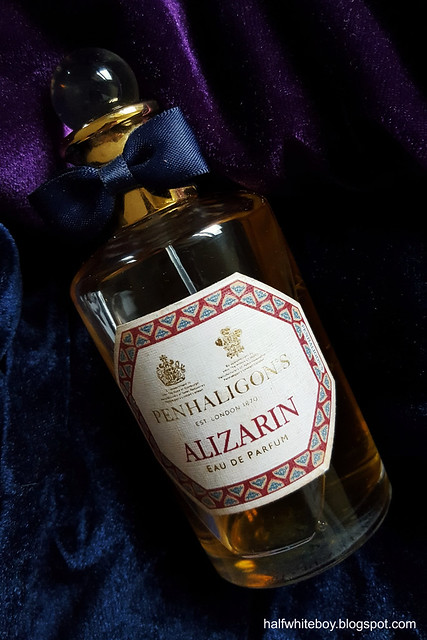 This one is my wife's actually and is in fact listed as a woman's fragrance on Fragrantica. I tried it and was surprised to find it quite masculine. The classification is definitely off in my opinion. I've worn it a couple of times now to test it, and I must say that Alizarin EDP by Penhaligon's is a love for me.

This juice has a dominant leathery oud accord with a smoky, woody undertone. The oud here isn't pungent but rather tamed, blending seamlessly with the leather. It's still strong, however, but it doesn't really punch you in the nose, especially with a little restraint on the sprayer. It's strong but at the same time it isn't, if that makes any sense.

There's a very brief hint of citrus in the opening, barely detectable. Though listed, I don't get any floral notes. I guess they're just working their magic in the background, supporting the main stars. There's a little sharpness I sometimes get as the fragrance develops but overall Alizarin stays warm and earthy all the way to the drydown.

True to its EDP formulation, Alizarin projects quite well, affording you moderate to heavy sillage, depending on how much you douse yourself with it. It also is very long-lasting, making this Penhaligon's offering well worth your buck. It's perfect for cold weather although I freely wear it here in the tropics, as long as I'm in an air-conditioned space for most of the day.

Like my wife, some women may be able to rock it but I really think this is more of a masculine-leaning fragrance. Surely this isn't a safe blind buy but it is a must-try. Like I said, Alizarin is a love for me, so I'm unofficially claiming this bottle as mine now.

See also:
Vial trial: Sartorial by Penhaligon's
It's another glorious offering from this British house.