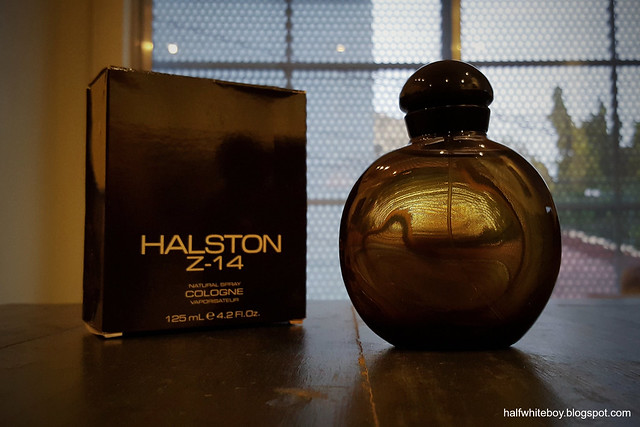 While I'm steadily intrigued with each new fragrance I come across with--on the internet or at stores--I'm also sort of exploring older creations. I don't care if people say they're dated or what, as long as I find them interesting. One such find is Halston Z-14 Cologne, which I saw from a local eBay seller. I looked it up and after some thought, bought it.

Halston Z-14 was first released in 1974, a time when so-called powerhouse fragrances ruled. I have no idea how the original smelled like but the bottle I have is no monster at all. Where I was expecting something that will punch me in the nose, Z-14 is surprisingly easy and pleasant. I don't know if reformulations have anything to do with it but this juice to me is not an assault to the senses at all. It's not really soft, it's just not overbearing.

A mix of lemony citrus and greens greet you in the opening, underscored with an old-school powdery accord. I find it lovely, and a colleague immediately remarked, "Classic," to which I agree. The citrus doesn't stay very long, however, leaving the mix of greens and this powdery scent to carry on with the performance. At this point there's an earthy and woody blend that becomes more noticeable, further contributing to this frag's "manly" factor.

Although a listed note, I really don't get any leather here. Maybe it's not the leather I'm accustomed to or it's simply coated by other ingredients at play. Let me be clear, though, that this doesn't take away from Z-14's beauty. Not at all.

Performance-wise, this juice can last you several hours (the whole day actually) but there's not much projection after its 2nd or 3rd hour. It's not much of a projection beast, though, to begin with, and I can afford a few touch-ups here and there.

All in all, Halston Z-14 Cologne is worth a try. It may not be to everyone's liking but I think it merits a sniff, especially since it's so inexpensive. It's very unlike any contemporary fragrance and I guess its charm lies in its novelty, a celebration of classic, masculine scents. And oh, I like the simplicity of the bottle; no unsightly labels whatsoever. Plain and simple but distinct.