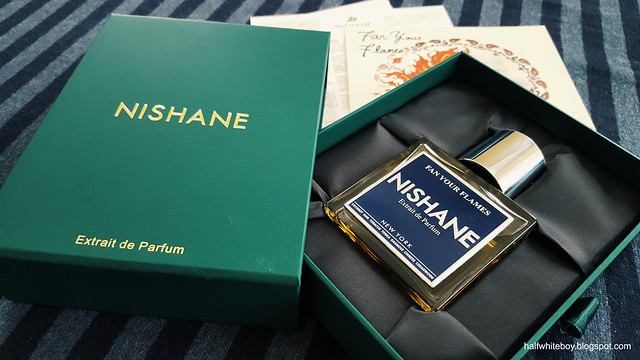 Over the last couple of months I've been able to acquire a few Nishane bottles from fellow fragheads but I only got to actually use one now. Despite not giving them all a full wear yet, this Istanbul-based house is delighting me so far. Their 50ml bottles are all pretty basic-looking but what I like is that they come in this neat, book-type presentation that's not bulky. There's also a cute little card about the fragrance slipped in, with an accompanying list of all of the house's other fragrances.

On a whim I decided to wear Fan Your Flames, which, like all others from this house, is in extrait de parfum concentration, somewhere between 30% to 38%, I've read somewhere. This could explain why it leaves an oily residue that doesn't evaporate easily when sprayed on the skin. That said, I caution against spraying on clothes.

Right off the bat Fan Your Flames gives off a wonderful rum and coconut accord underscored by tobacco. It's dense but it gives me some serious tropical vibes, which is why I went ahead and wore it in the dead of summer. And my, does it project!

An hour or so later the rum starts to mellow and a certain sharpness appears, the cedar most probably. Later the tobacco morphs from dried tobacco leaves to something that hasn't completely turned brown yet, with the green still visible. However, I only notice this change close to where I sprayed because the coconut just keeps on projecting relentlessly, almost drowning everything else out.

This one's definitely a long-lasting fragrance that can practically serve you from morning till night. Of course its strength wanes after several hours but an extra half-spray or two can instantly do wonders in reigniting it, or fanning its flames if you may. It's not the most versatile scent but it's fantastic in the right occasion. However, if you're someone like me who doesn't care much, then by all means enjoy it whenever you want.

One thing I haven't noticed until someone pointed it out is that the fragrance's main notes are printed on the label, which, as it turns out, is pretty much accurate, in the case of Fan Your Flames at least. I have no regrets blind-buying it but I must say that it's not for everyone. For me it's worth buying but I suggest trying it first.


Now I'm off to some island to soak up the sun and sip some cocktails while dancing to reggae music.

But only in my mind.