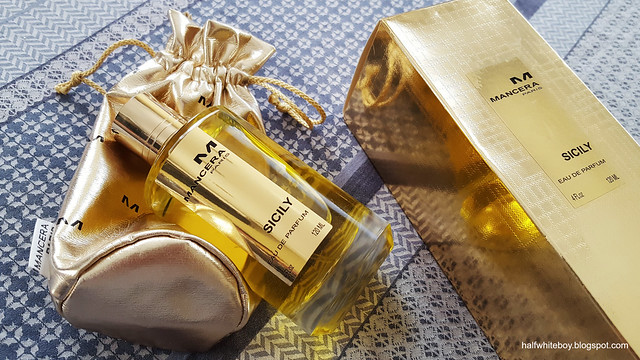 Sicily by Mancera is a bright, citrus-floral fragrance that for me says summer all over it. Now whether that means a perfect match for the hot weather or something to perk you up during the colder months is all up to you.

The opening is a powerful barrage of citrusy, fruity goodness, with orange in the lead. It's sharp but juicy, a little sweet but also sour, a cocktail that's one to wake up the senses.

But then Sicily isn't able to sustain this introduction, as several other players start muscling their way into the scene after only several minutes. The zing is definitely still there but the peach note starts becoming noticeable, growing stronger by the minute, followed by an intoxicating ylang-ylang and a less prominent jasmine. For a moment I'm reminded of Maison Francis Kurkdjian's Aqua Vitae Forte because of the ylang-ylang and accompanying citrus. While that one is extremely smooth and refined, Sicily is louder and a little rough around the edges.

On my skin the ylang-ylang just goes on and on even as the citruses and peach begin to soften and are relegated to the background. It is a pretty scent, easily likable. Although unisex, I think it's this floral dominance that makes the fragrance a little feminine-leaning based on common perception. I still happily wear it, though, because fragrances shouldn't be defined by gender.

Consistent with Mancera's reputation for beastly performance, Sicily is never short of making its presence felt, with an enchanting scent cloud around you for most of the day. However, it's not as leggy as its cousins like Mancera Black to Black, so an extra spray or two may come in handy if you want to take it with you into the evening. Overall it's a really good fragrance, may not be for everyone, but well worth a try.