Can Edwin Lacierda potentially be a cyber criminal?

Oh common, with libel lumped together with cybersex, child pornography and cyber fraud, how else would you call someone who can potentially be guilty of cyber libel (or online libel, whatever you call it) but a potential cyber criminal? 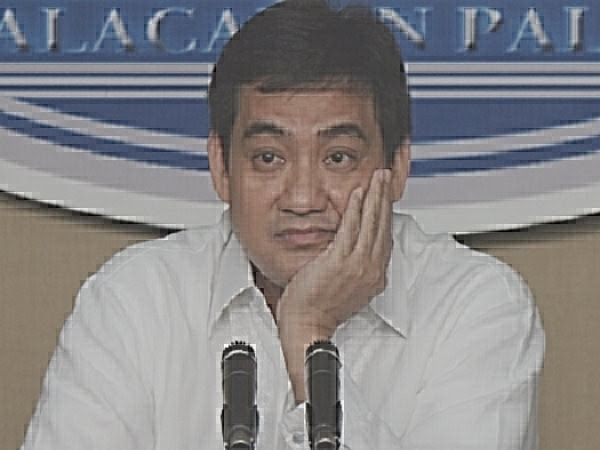 Who knew he kept a blog curiously called the San Juan Gossip Mills Outlet! Thanks to Jojo A. Robles of the Manila Standard Today, I got wind of Lacierda's past life before he became the Palace's mouthpiece and by default, a staunch defender of the infamous law. He called himself then -- at least at the time -- "a veritable fanatic of the Internet" and was himself a guest lecturer at De La Salle University on "Freedom and Regulation in Cyberspace." 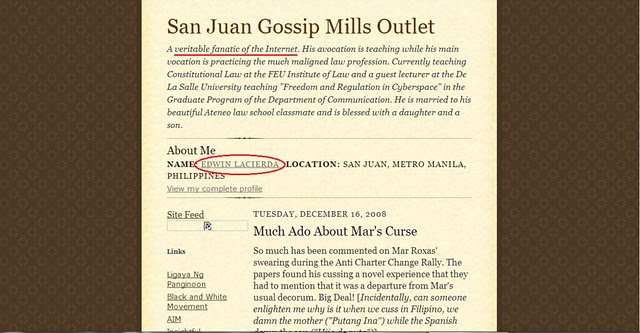 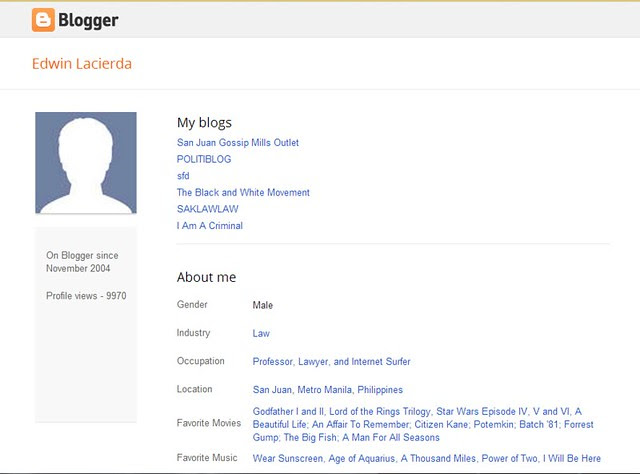 And my, oh my, how Lacierda blogged! His blog, which is still live on cyberspace (at least as of this writing) contained an abundance of lengthy, well-written political articles and potentially libelous rants from 2004 to 2008. I enjoyed reading them actually that at times I forgot it was Lacierda's. Reading his posts felt like reading from someone familiar, someone I can relate to -- a blogger, much like me at times, who just happens to be critical of the current administration, only that his were written at a different time -- when Gloria Macapagal-Arroyo was still President.

I took some screenshots of excerpts from his posts (I couldn't rely on just links, in case he decides to take them down) and see how vile he sometimes got, how his writing, though more eloquent, feels much like how netizens express their dissent today. He didn't mince words in calling some people lapdogs of then-President GMA, in naming them epitomes of boot-licking or of everything that is wrong with this country, in dismissing them as fools, with fascistic tendencies, accusing them of inventing jurisprudence, and more. He never hid his contempt for GMA and her government back then. He was definitely outspoken.

If the law were indeed retroactive, or that it could be applied to postings still live when the law took effect, it would definitely be interesting how it would pan out in Lacierda's case. 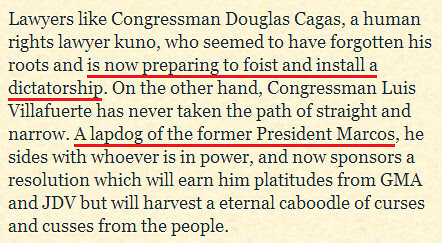 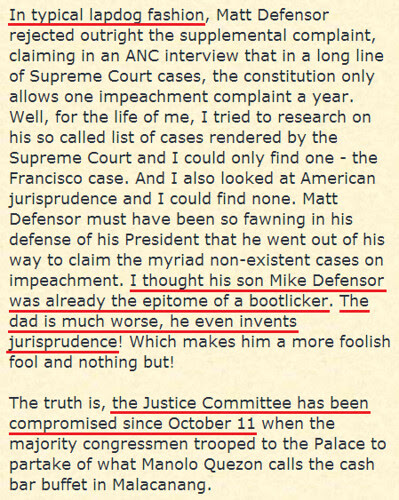 From "Onto the Next Constitutional Beachheads," June 18, 2007 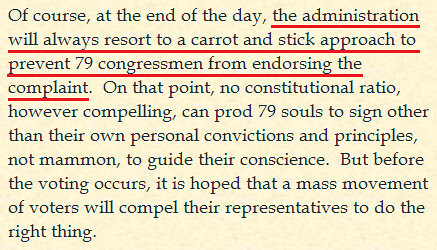 I also find it somehow funny how he criticized GMA's then-Justice Secretary Raul Gonzalez, even suggesting the DOJ as one big pikon (onion-skinned), because this is very much how I find most of our government officials right now, Noynoy included.

It's also quite amusing that the DOJ and basically GMA's government then were also at loggerheads with the Supreme Court, something quite familiar with the current administration until about a few months ago when they've successfully impeached Chief Justice Renato Corona and subsequently installed one of their own lapdogs (borrowing from Lacierda here) as his replacement. Funny how Lacierda lashed at Gonzalez's media pronouncements when his boss was just as much -- if not worse -- at the height of the Corona impeachment. Everything feels like déjà vu here. 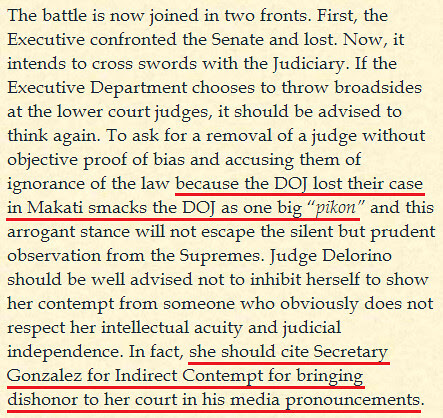 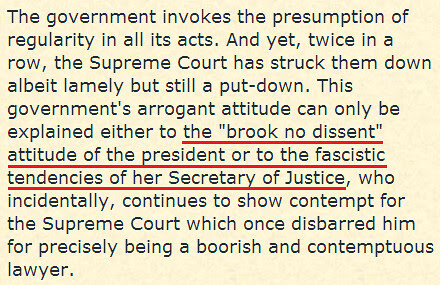 Arguably, Lacierda cherished his life as a blogger. In his post titled "The Humanity of Blogging" (March 29, 2006), he called bloggers "trailblazers in a new field" and even declared that "humanity abounds far more in cyberspace than in the real world," acknowledging that spite and anger are almost always present. 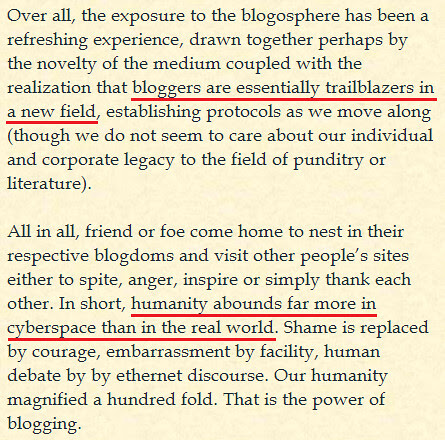 So why is he defending RA 10175 so smugly now, the very law that practically kills humanity where it abounds more? I'd like to believe that unfortunately for him, it's his job as Palace spokesperson. On the other hand, he's no longer blogging. Or is he?

Well, today, Oct. 4, 2012, a group of bloggers has just filed a case with the Supreme Court, the tenth such case against RA 10175. It is but a testament to the fact that Filipino netizens today are not at all wallowing in indifference, as what Lacierda had warned about so ardently in his post "An Open Letter to Harvey Keh" (Feb. 28, 2007). This seemingly incessant ranting online and continuous filing of cases with the SC is Filipinos getting involved, getting indignant and acting on that indignation, as Lacierda himself wrote. 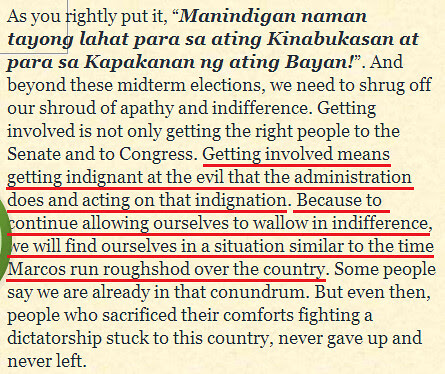 His post "MOA-AD Intervention" (Nov. 12, 2008) resonates with the same mood felt at the moment, at least among Filipinos in cyberspace. It may be about a totally different issue but it harped about bloggers making political history, about them acting on something. What those bloggers did today was no different than what the group Lacierda wrote about did in 2008.

Lacierda's blog is simply a reflection of how it's done in cyberspace -- unfettered and uncensored. It is a demonstration of freedom of speech, of expression, in a place of freedom -- the Internet, of which he was once a veritable fanatic. It's just sad how he effectively relinquished that freedom and probably turned into a boot-licker himself.