Misibis Bay in photos: Our villa and other accommodation options

November 28, 2012
After showing you around the resort, I'm now letting you in our villa at Misibis Bay Resort. We got a premiere villa for our recent holiday and my, was it gorgeous! Still expensive for me, but truth be told, it's already one of the cheaper accommodation options in this resort. 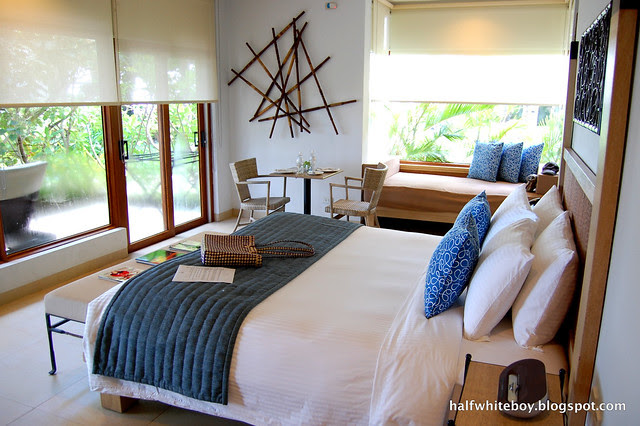 The view of the room upon entering the door.

Premiere villa
At 50 sqm, the room was definitely spacious. It had a king-sized bed, a daybed tucked into a glass-paneled section that protruded from the villa, and a small table for two in case you wanted room service.

The huge glass windows and sliding door that occupy one whole side of the room allow for lots of light to come in. It's facing the sea but our villa wasn't exactly overlooking the beach. The view is partially obscured by tall plants but which provide some degree of privacy in case you wanted to lounge on the sun beds outside. Instead of curtains, double blinds are installed to cover all that glass. 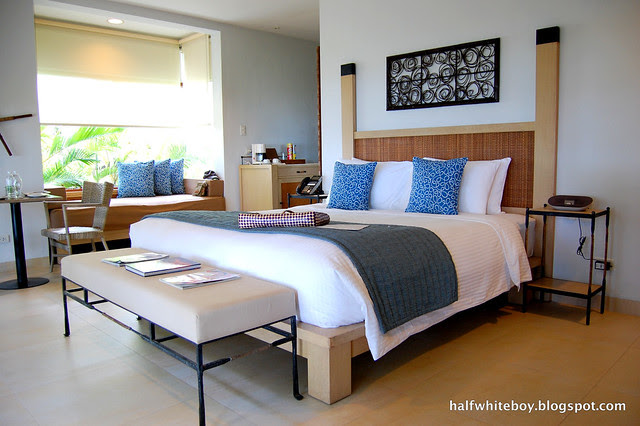 I could stay here all day.

The room came equipped with a home theater system complete with multiple surround-sound speakers. We only got to use the TV, though (for UFC 154: St. Pierre vs. Condit). There's a personal fridge, a coffee-maker, a closet, and a safe. An iPod dock is also available bedside. And oh, in case you feel like fixing the creases on your clothes caused by packing, there's a flat iron and an ironing board on hand. 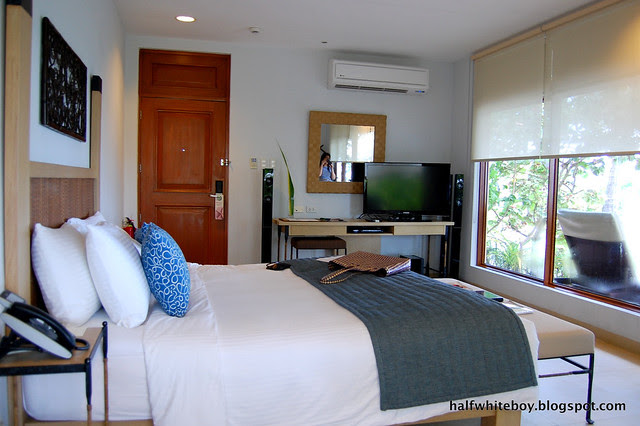 The view of the room facing the door. See the entertainment system? The closet and mini-bar.

The bathroom was just as huge. There are two sinks, a bathtub, and separate toilet and shower rooms. The shower has both a rain shower-head and a handheld one. They've also provided a digital weighing scale just so you could check if you've been getting way too much food from the buffet. The toiletries, by the way, are Ferragamo. 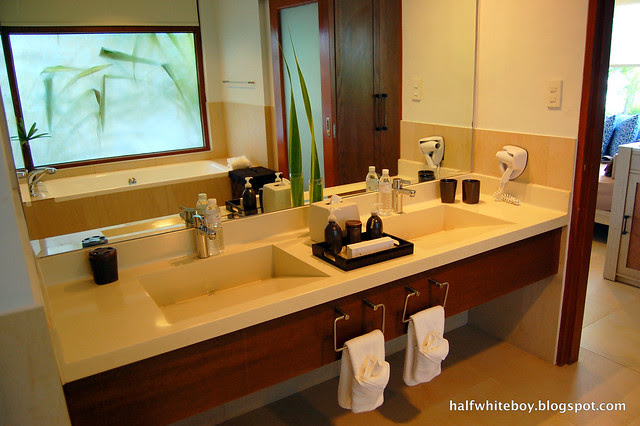 The his-and-her's sink, with the bathtub reflected on the mirror. 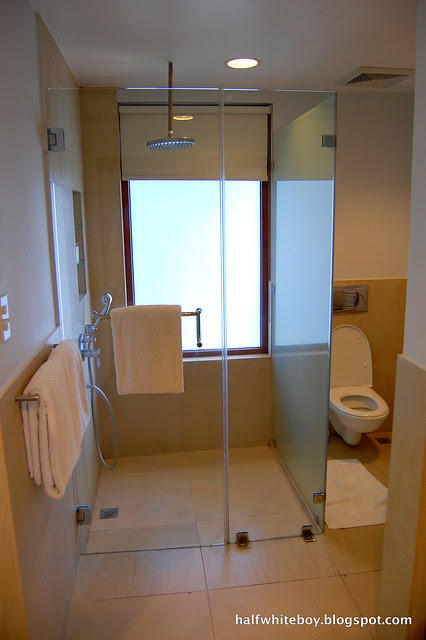 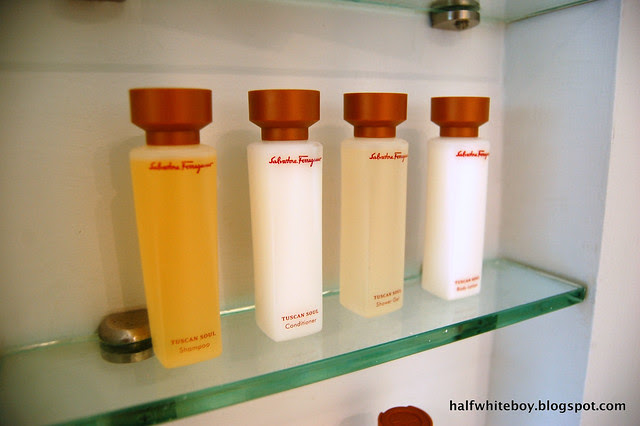 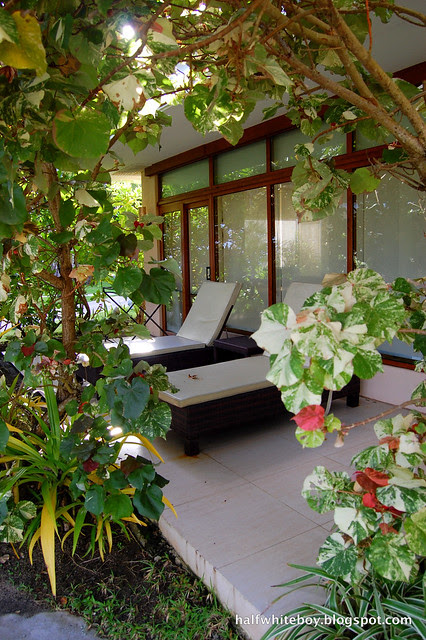 Our own private veranda. 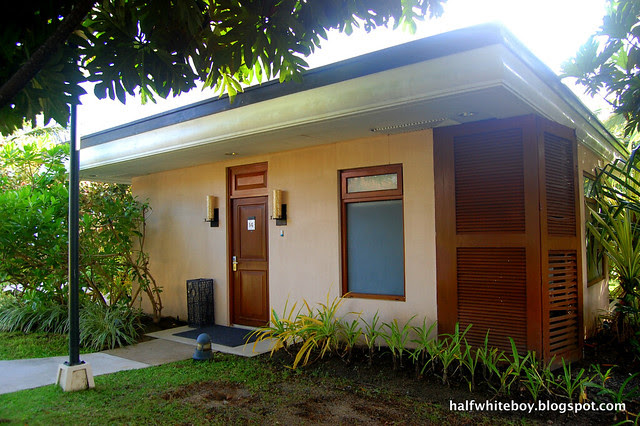 A shot of what our villa looks like outside, which isn't much actually. No. 14 -- so apparently we weren't too far from no. 12, where Zac Efron stayed.

There's a nightly turn-down service where they remake your bed and bring you complimentary Filipino snacks. So far, we've had kutsinta, maruya, and palitaw. Free WiFi is available in the room and almost everywhere around the resort.

Other villas, rooms and suites
A host of other accommodation options are available here but there are only a handful of villas, the most expensive of which have their own private plunge pool overlooking the sea. That includes villa no. 12, where Zac Efron stayed just recently. From the videos I've seen, his villa looked exactly like ours. The only difference was the private pool.

Most rooms, on the other hand, including some more expensive ones, are housed in either bungalow-type structures or two and three-storey buildings, all of which come with private verandas. They all have views of either the sea or the lagoon pool, to wit:

Lagoon poolside
Junior suite deluxe
Premiere villa (or private garden near the beachfront, as was the case with us)
One-bedroom deluxe
One-bedroom premiere 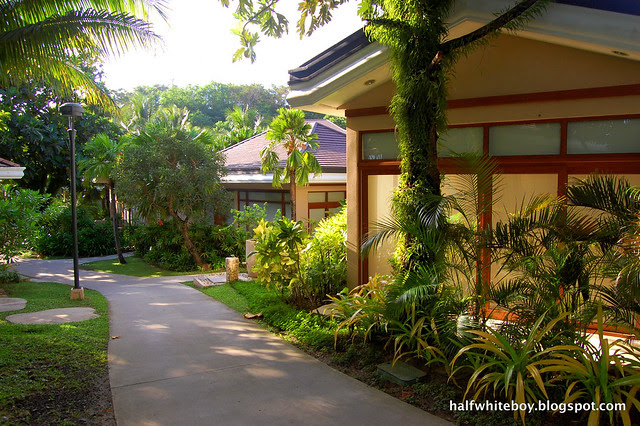 Bungalow-type structures just outside our villa. 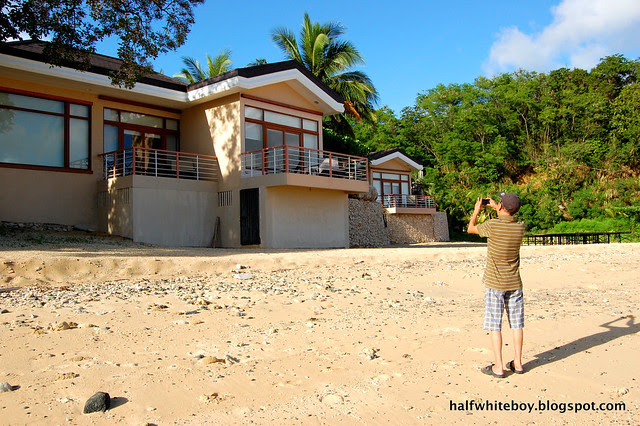 Some beachfront accommodation; could either be one-bedroom premiere or luxury, or junior suite premiere, if I'm not mistaken. 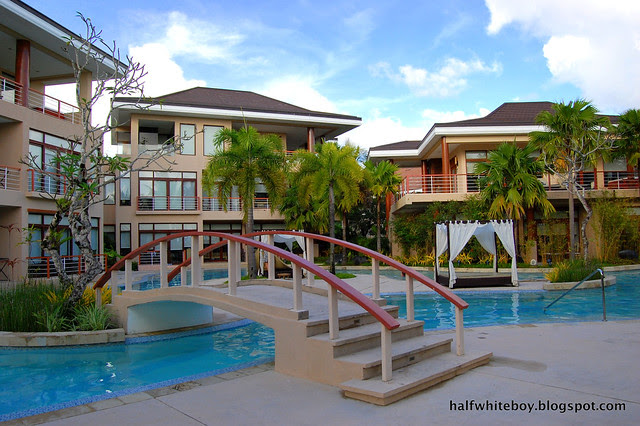 Exterior of lagoon pool-view rooms and suites. I still prefer the beachfront ones, though.

Garden-view rooms
I first learned about these much cheaper garden-view rooms from group-buying site Deal Grocer, although I can't seem to find any information or photos about them on the resort's website. Anyway, I found out firsthand that these rooms resemble apartment complexes or adjacent housing units in a subdivision. Maybe because they're located just outside the main resort area, that's why it feels like I was no longer in a resort at all but in a subdivision. They also got their own small pool! 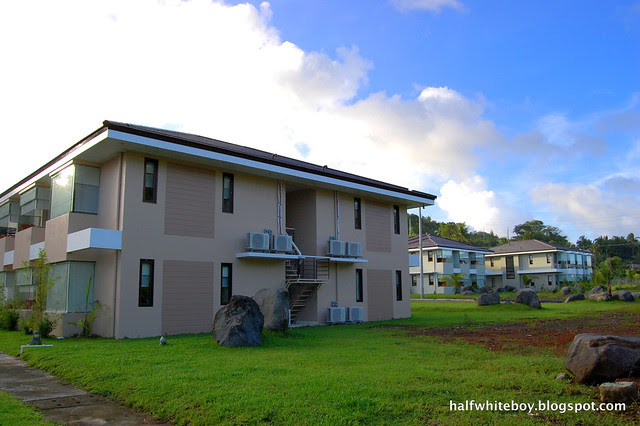 Resort or subdivision? I reckon it would be nice to go biking around here. 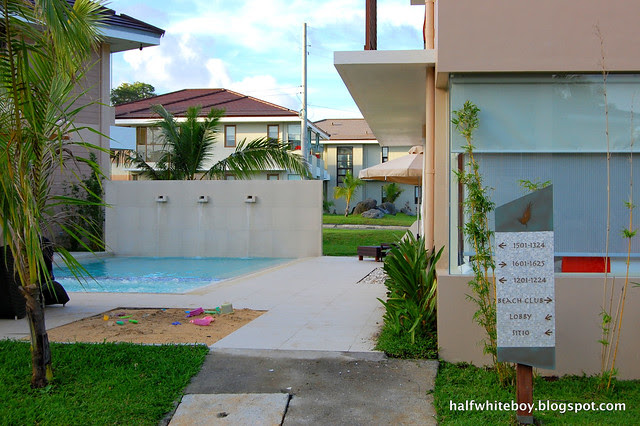 The small pool I'm talking about. Not bad!

I also got to peak into one of the units. Consistent with what I saw from pictures on Deal Grocer, the room was quite small. But it doesn't look bad at all. 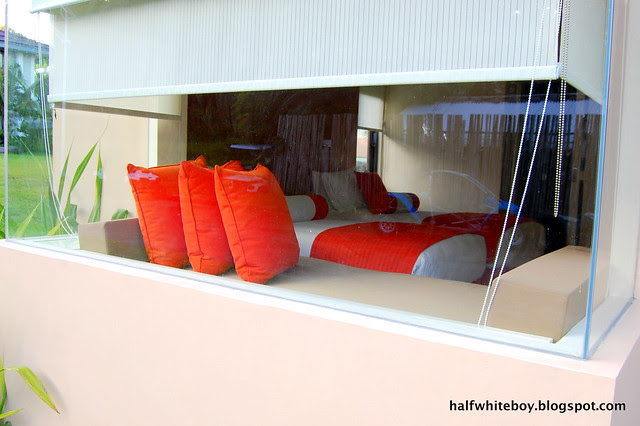 I went Peeping Tom with this room here.

While I'm actually digging the vibe here, I find it rather ironic that I don't really see much of any garden here for them to be called garden-view rooms. Maybe they'll grow soon.

Next up I'll feature their restaurant and the food.