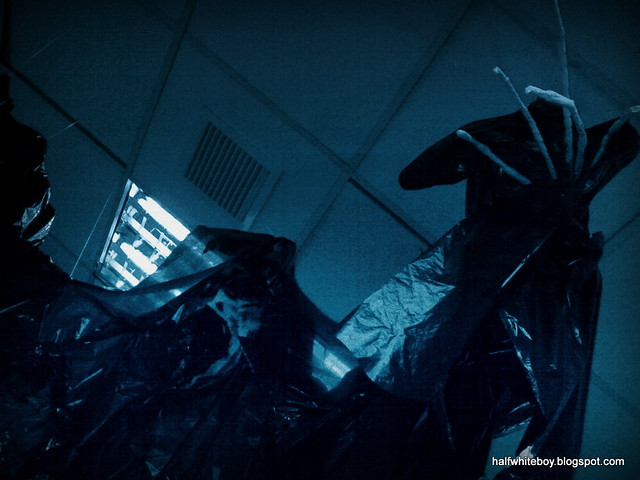 Throughout my years of stay in this job, I've seen how Halloween has evolved into one of the most-awaited occasions here at our head office. From simple trick or treat activities organized by small groups many years ago, Halloween celebrations have since grown in scope that later involved decorating office areas and which have only become grander each year. Our HR has even been handing out prizes for the "best floor" for the last 3 years.

Zooming in on our department, we first tried our hand at serious decorating 7 years ago in 2007. We held a contest where cubicles were clustered into teams, competing for cash prizes donated by our bosses. At the time we fondly called our area "Azkaban" after a floor re-layout that left us feeling we were in an enclosed pen or something. Anyway, we stuck with it and used it as our theme for the decorating contest. 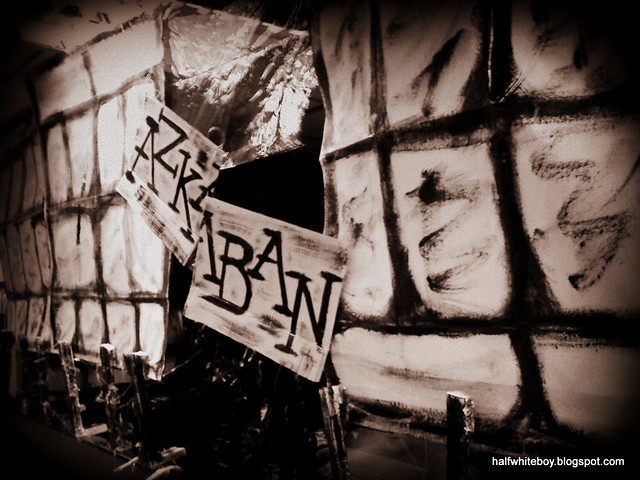 To the uninitiated, Azkaban is the infamous prison in the Harry Potter books where criminals are locked up. Foul creatures called Dementors that feed on a person's joy sort of guard the place. These floating monsters suck out every ounce of happiness in prisoners, presumably until they're driven mad or worse, killed.

We gathered boxes, styrofoam and covers from new PC deliveries and plastic sticks that once supported balloons. Then we bought black paint, garbage bags, some nylon strings, manila paper and red cellophane. We painted the flattened boxes and manila paper to resemble brick walls, and cut out styrofoam and haphazardly painted them so they could be our prison bars. We augmented stuff we could no longer finish with garbage bags. The red cellophane was used to cover the fluorescent lights.

We knew very well that Azkaban would never be complete without Dementors, so they just had to be part of our decor. We made three, and making them was most challenging. Well, maybe at least for me, who served as de facto chief designer.

While I asked my colleagues to wrap those balloon plastic sticks with tissue, I worked on the face. That we would never be able to make an exact replica was a given, so I tried my best to make it scary at least.

I stuffed a monitor cover (from our new PCs) with crumpled newspaper and sketched the eyes, nose and mouth, and cut holes. So it won't look flat, I pinched the areas around the eyes, nose and mouth and stapled them to afford us some contours. Then we painted whatever's showing from the holes with black paint. Much to our pleasure, the resulting effect had the eyes and mouth look eerily hollow. We added a few light strokes with the paint brush to dilute the material's white color. Happy with our "prototype," we made two more.

Then came the tricky part, which involved a number of garbage bags. We first hung the head with some nylon then built on that by throwing layer upon layer of plastic supported by strategically placed nylon strings. For the hands we tied together the tissue-covered sticks and then bent them to resemble joints. And so they won't end up just bunched up together, I painstakingly pulled them apart with nylon in every conceivable direction. It looked deceptively easy but it was quite hard so to speak.

That was our first Dementor and it was really huge--and might I say very imposing. We decided it would be our "Star Dementor," or "centerpiece" if you may. That allowed us to spend much less effort with the other two, which we positioned upright in the corners. 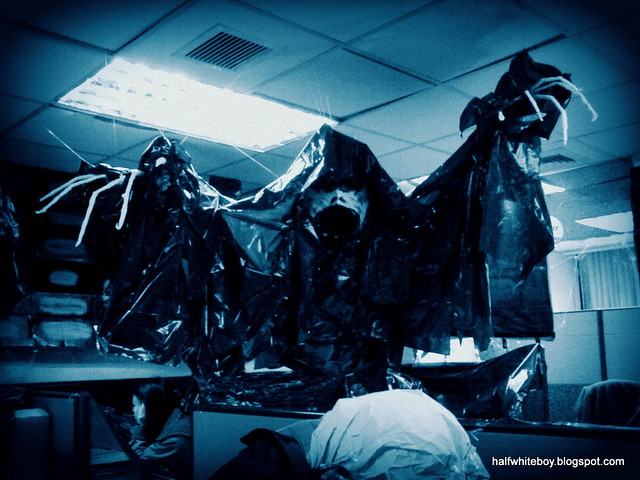 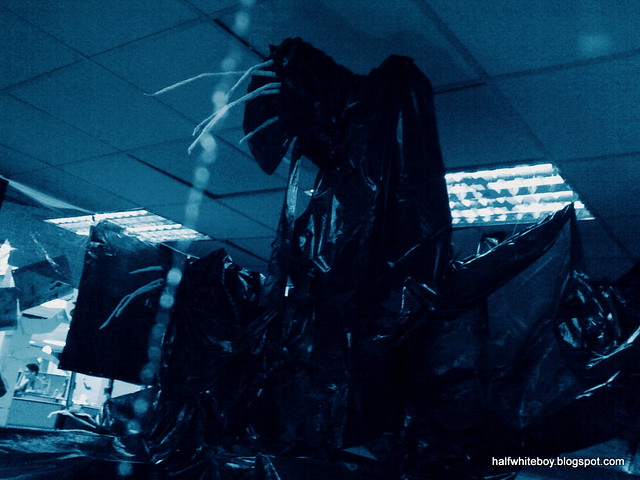 Side view of our Star Dementor. 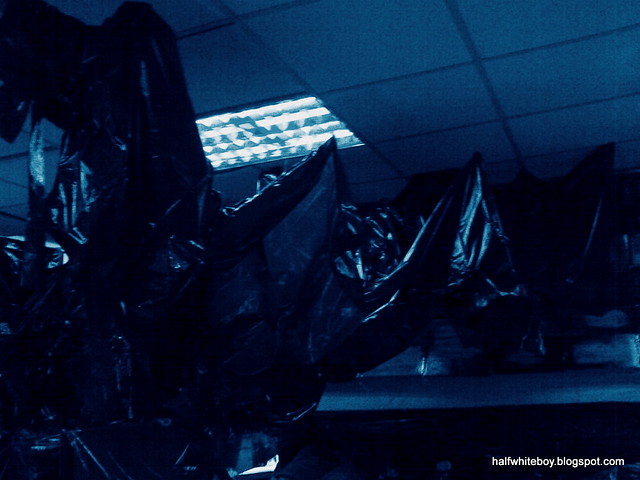 I said this Dementor was huge. Just look at how long it spans our little area. 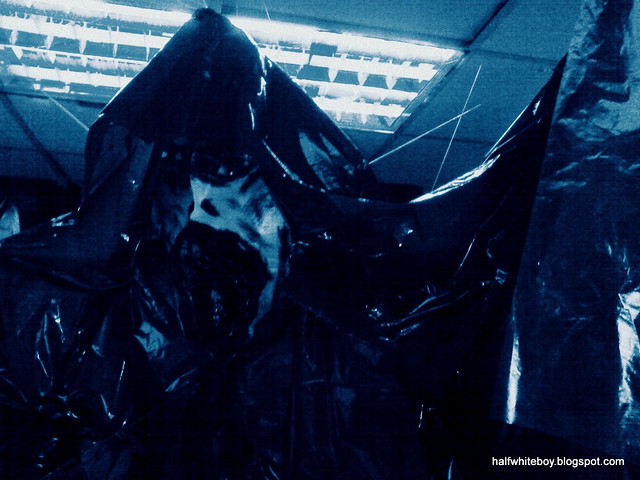 "Smile. It will be your last."

After all the hard work, it was really great to see the reactions from colleagues and visitors alike. It was very gratifying, especially upon seeing how scared the kids were that no one even dared come inside. They were all just taking a peek from the entrance. You can sense they wanted to come in but were just too scared to do so.

And to top it off, we won! Hooray for the Dementors and hooray for Azkaban! 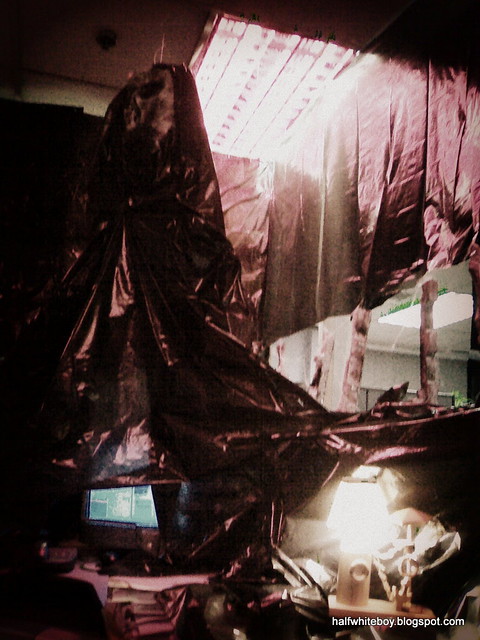 One of the "lesser" Dementors. 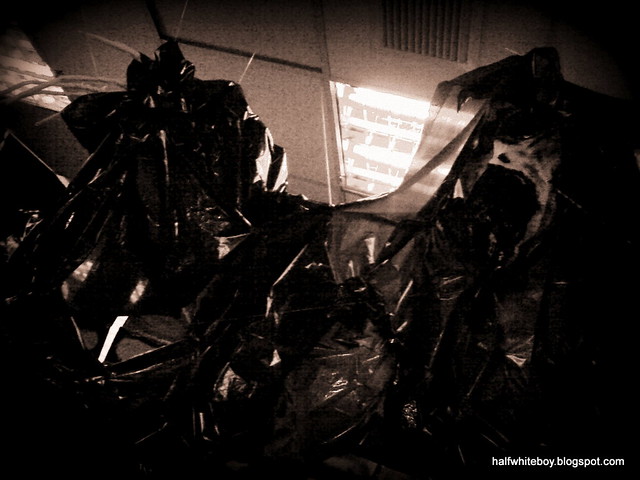 My Patronus is a Dementor.

We followed this success with Gotham City the next year where I was all made up as The Joker. Unfortunately after we transferred to a different floor, we never had such Halloween decorating contests again, nor have we joined HR's. This year, however, I'm excited (and scared at the same time) because we're bringing back the Harry Potter vibe by transforming our entire department's office into... *drumroll*... Hogwarts!

Let's see how that one goes.