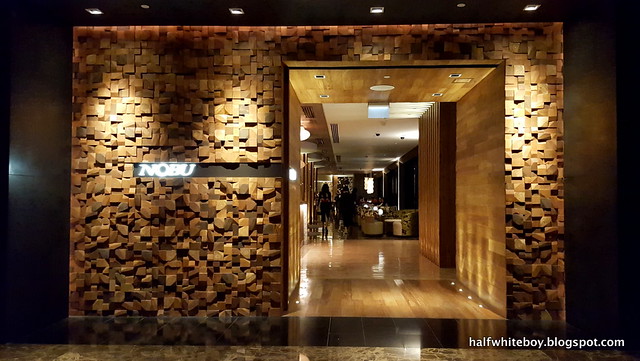 The entrance to Nobu Restaurant Manila. I must say that I like the design.

A little over a month ago this hampaslupa (vagrant) got to dine at Nobu Restaurant Manila, after which I ate nothing but instant noodles for weeks to compensate for the splurge. We were staying then at the fairly new Nobu Hotel at City of Dreams Manila, so we thought, for whatever it's worth we just had to try the restaurant.

Of course everybody knows Nobu, the Robert de Niro connection and all that. As such, expectations were naturally high. But did it live up to its reputation, not to mention all the hype surrounding it? Let me break it down for you.

Interiors and ambiance
With its clean lines, murals, and abundant use of light-toned wood, the Japanese inspiration is evident inside Nobu Manila. Bathed in yellow lighting, the wood comes to life and offers the place that sense of warmth and coziness. On one side are floor-to-ceiling glass panels that, during the day, allow some natural light to come in.

Nobu to me does not scream fine dining at all. On the contrary it appears to be a bit relaxed, a place that offers a rather casual dining experience instead of one that's restrictively formal, which easily alienates most of us common folk. The table and seating options alone would tell you that, particularly the lounge-type ones. There's also a bar to the right upon entering and a sushi bar further inside. Music isn't that soft either and customers can get a little too loud as well. 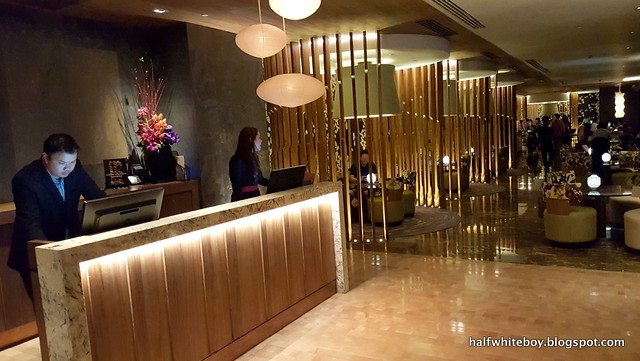 At the reception, and a first peek into the dining area. 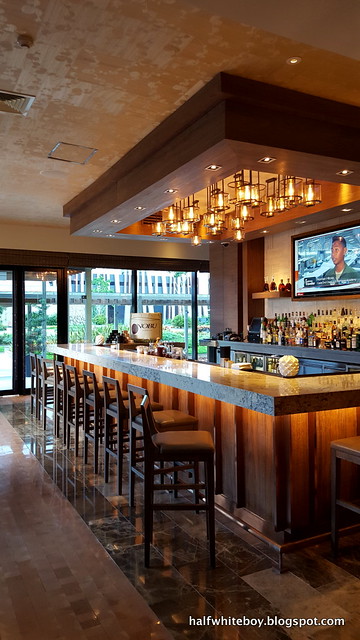 If you care for some drinks there's a bar here. 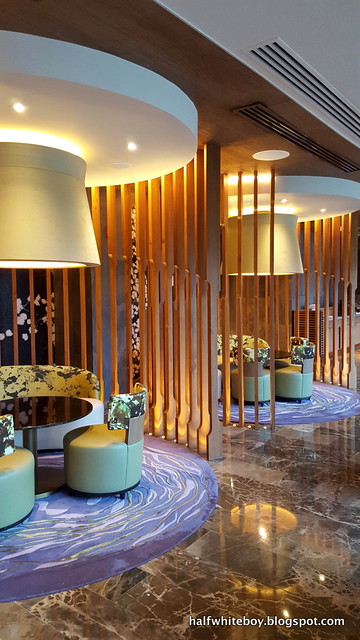 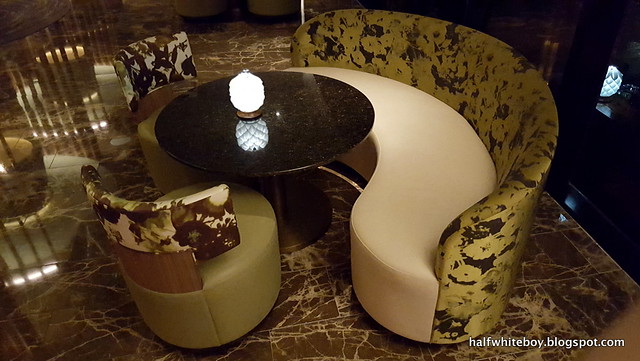 This doesn't look too formal, does it? I like it, though, except when I'm having a proper meal. 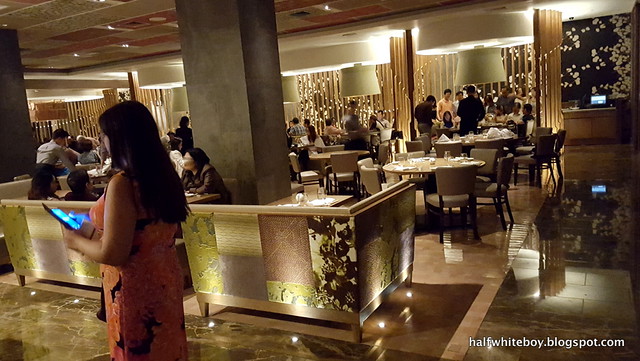 Other table and seating options inside. We were seated in one of the round tables for dinner. 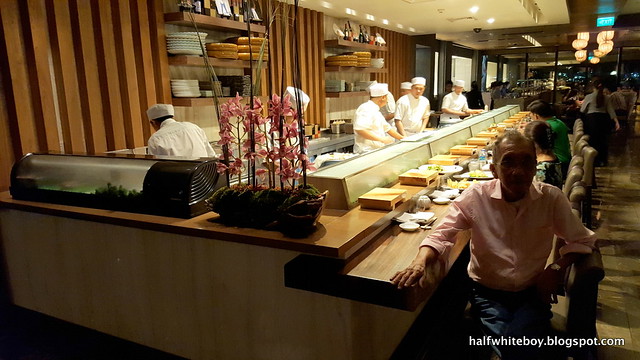 The sushi bar, in presumably good old-fashioned style as it has none of those fancy conveyor belts.

Alfresco dining is also available and where customers are still shielded from any curious onlookers and passersby. For a bit more privacy, there are also four or five gazebo-type structures separated from each other by water. Each gazebo is accessed through a short walkway from the main outdoor dining area. I heard that getting one of these will cost you (like a minimum guaranteed order or something), at least for dinner. At breakfast it's free for all. 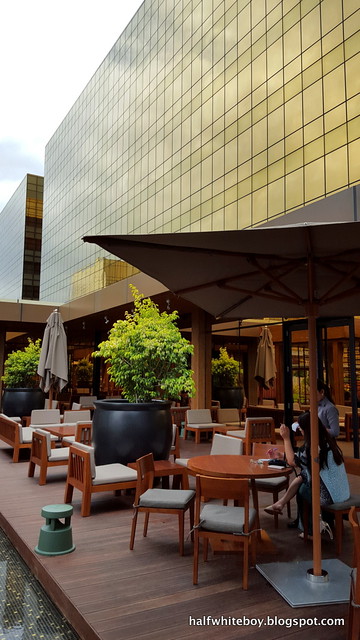 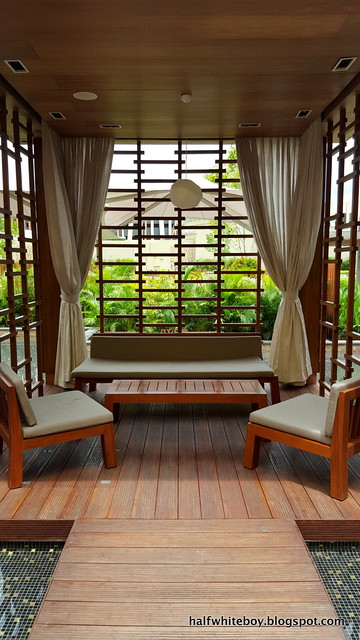 I wonder how much it would take to book one of these. Never mind, it's too warm outside anyway (says the hampaslupa in me). 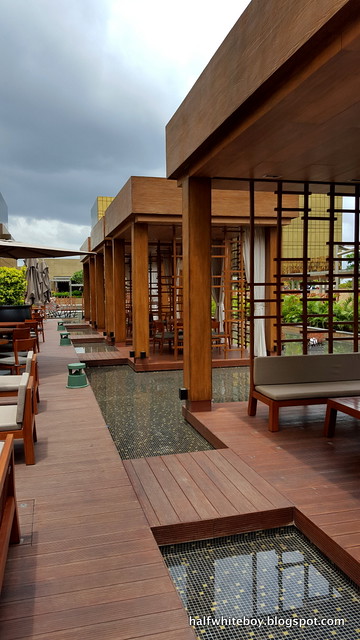 Service
We booked a table through the Nobu Hotel front desk and thankfully they didn't mess up. When we showed up at the restaurant we were promptly assisted by staff stationed at the reception. Soon enough we were ushered to our table, where a chorus of "Irasshaimase!" caught me by surprise. Apparently that familiar greeting in many a Japanese restaurant applies here, too.

That was at dinner. Unfortunately the ladies stationed there the following morning for breakfast weren't up to par with their evening counterparts. We knew the place was full and we were fine about waiting for a table but the wait could have been much shorter had they been better equipped with some problem-solving and decision-making skills.

Now back to dinner. Judging from the two or three waiters we called throughout that evening, I can say that they're snappy and very attentive. Everyone was on their feet and Nobu definitely feels adequately staffed. Same thing observed at breakfast the next day.

Our main server was nice. He was attentive but never intrusive. He also displayed solid knowledge of the menu and was able to intelligently suggest options on how we ought to go about with our orders. I hate it when waiters are clueless about the menu, so Nobu definitely scored good with me in this area. They sure did train their waitstaff well.

The food
By all indications Nobu is a Japanese restaurant although Chef Nobu Matsuhisa has infused some Peruvian flavors into traditional Japanese dishes. The menu offers a range of cold and hot dishes, sushi, and some dessert, with prices that run from Php 200 to close to Php 3,000 a dish (VAT inclusive but subject to local tax and service charge). But if you want to skip the choosing part, there are two multi-course Omakase menu options available. However, those are priced at Php 4,480++ and Php 6,160++.

Following our server's suggestion, we went the cold dish to hot dish to sushi route. He said it's "family style" but be forewarned that it's none of the family-sized servings we're accustomed to in most Pinoy and Chinese restaurants, as each dish is technically good for one person only, two at most. I think it's the idea of ordering several dishes, which they serve one at a time at the center of your table and where everyone is expected to dig in, that makes it "family style." So that's how they define it, fine.

Now here's what we had (prices quoted are VAT-inclusive but subject to local tax and service charge). 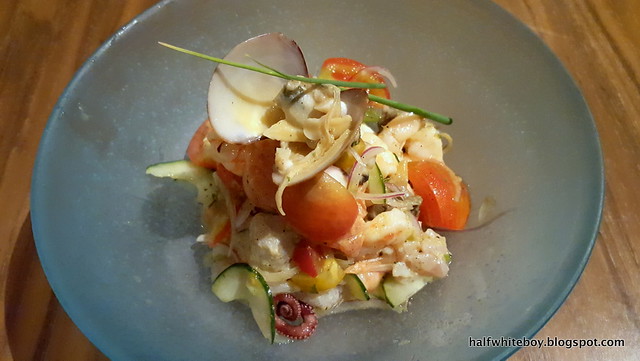 Mixed seafood ceviche (Php 685)
To put it bluntly, ceviche is just a fancy way of making kinilaw. This was immediately one of my favorites, though. The seafood (fish, shrimp, octopus, clam, etc.) was evidently fresh and the acidity was just right. Lobster, king crab, and mixed veggies options are also available. 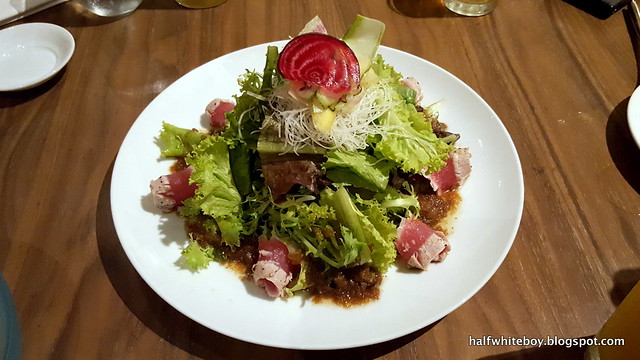 Sashimi salad (Php 1,255)
Mixed greens with curled up thin slices of pan-seared tuna and Nobu's signature Matsuhisa salad dressing. The dressing was good but tasted a bit familiar to me. Nevertheless I liked it. 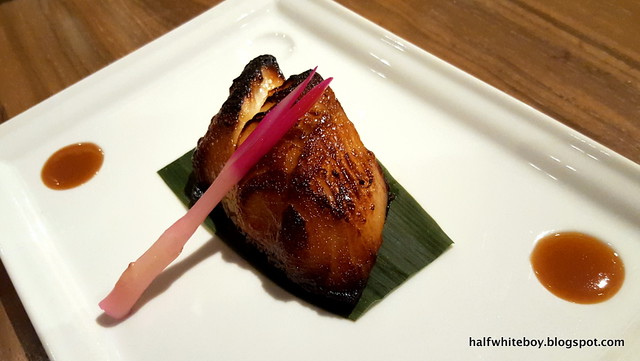 Black cod miso (Php 1,530)
A signature dish at Nobu, this was the second of my two favorites at this restaurant, the ceviche being the other one. The cod was tender and full of flavor, and my, that sweet miso glaze or whatever it is was simply divine! Our server gave us a background of this dish but I don't remember a thing. To me what mattered was that it was delicious, period. 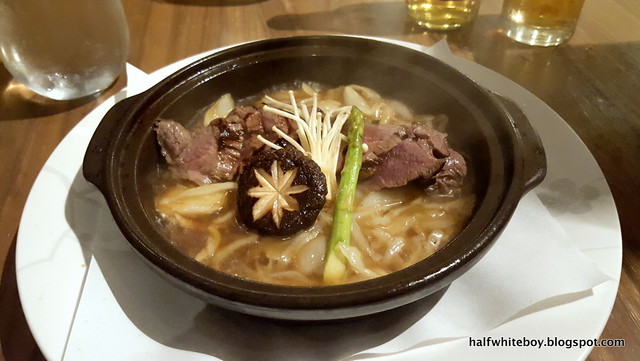 Beef tenderloin toban-yaki (Php 1,900)
We had no idea what toban-yaki was but our server did enlighten the hampaslupa in us. Turns out it's a cooking method that employs ceramic plates or dishes, which continue to emit heat long after they're removed from the oven. Our toban-yaki arrived covered, which the waiter promptly removed once it hit our table. We chose beef to afford us a break from all the seafood although tofu, toro (salmon belly), mushroom, and mixed seafood variants are also on the menu. I enjoyed the play of flavors, plus it was simply comforting to have such a hot dish. 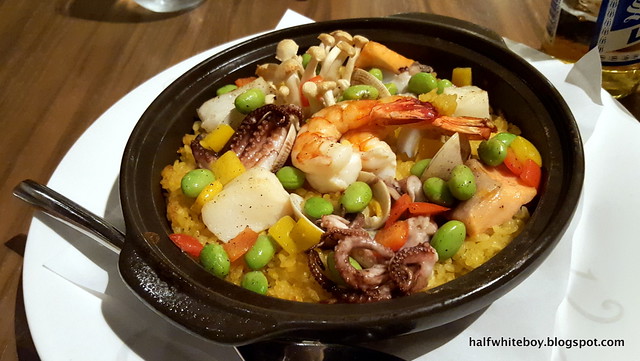 Nobu paella (Php 1,500)
It's a seafood paella with shrimp, octopus, salmon, mushrooms, and edamame among other things. It was good but I didn't find anything significant that would distinguish it from other seafood paellas out there. 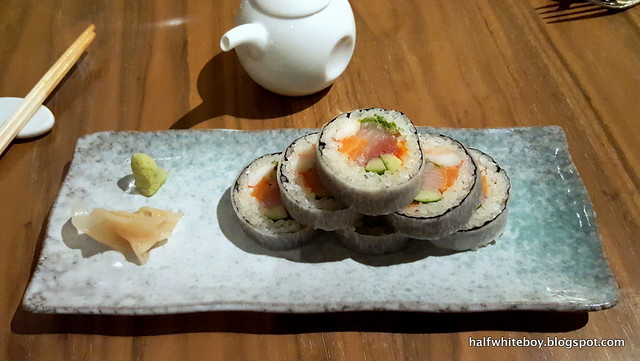 House special sushi roll (Php 540)
It had a mix of different ingredients like tuna, salmon, mango, and cucumber. It was a big roll with not too much rice in it, which for me was good. By this time I was already starting to feel full. 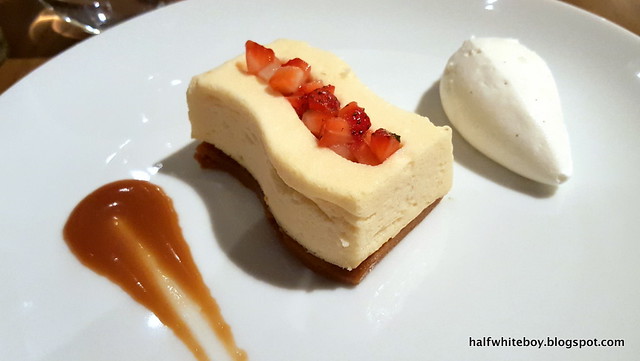 Sakura tofu cheesecake (Php 400)
I was apprehensive of this dessert having "tofu" on its name but thankfully it wasn't really tofu (or was it?). The cheesecake had a soft and silky consistency, and a very delicate floral flavor. I forgot if the floral taste was from the cheesecake itself or from the dollop of cream on the side. Either way, it was a pleasantly refreshing flavor that's not overpowering at all. 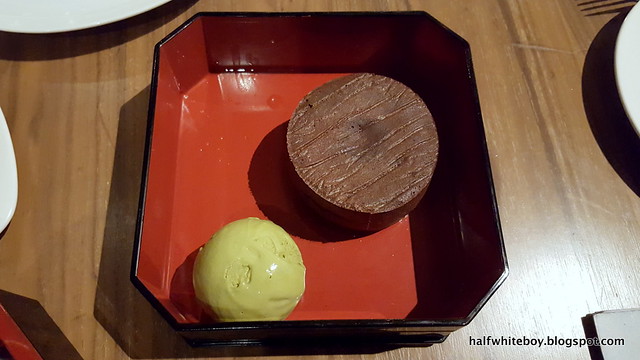 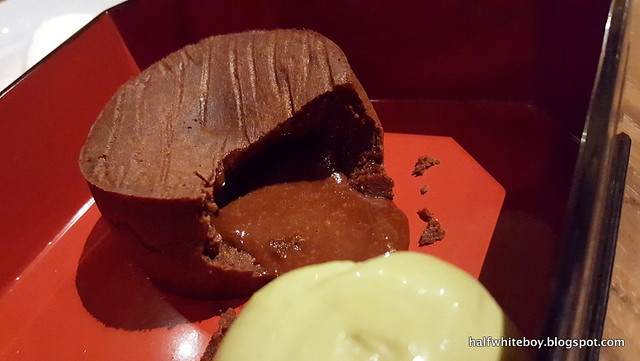 Chocolate bento box (Php 440)
A round chocolate lava cake served in a bento box with matcha ice cream, this was predictably a hit with me. I mean, it's chocolate!

All in all, the food did not disappoint. But because I no longer drink, I can't say anything about their wines and sake. I only had soda and coffee.

You can check out the full Nobu Manila menu here (sorry for the shadows in the photos).

************************
In hindsight
Nobu Restaurant Manila is no affordable place to dine -- at all -- and it's easy to dismiss it as yet another overpriced and overhyped resto. However, the hip interiors, the snappy service, and yes, the food in general, altogether make for a great dining experience. I cannot categorically say they justify Nobu's price tag but let's just say I was happy with my time there. Sure it's not a place for everyday dining, at least for us mere mortals, but personally it was worth the splurge.

I will definitely be coming back but for the sake of personal economics, it won't be soon. 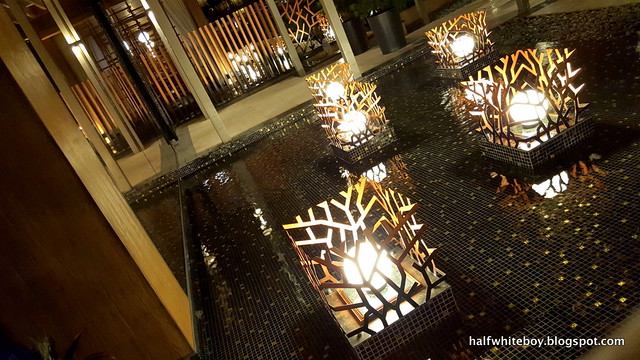 Outside Nobu at night.

Open for dinner from 6pm daily, Nobu Restaurant Manila is located at Level 1 of Nobu Hotel's South Tower at City of Dreams Manila. They also open for breakfast but for Nobu Hotel checked-in guests only. Be reminded that there's a smart casual dress code observed.