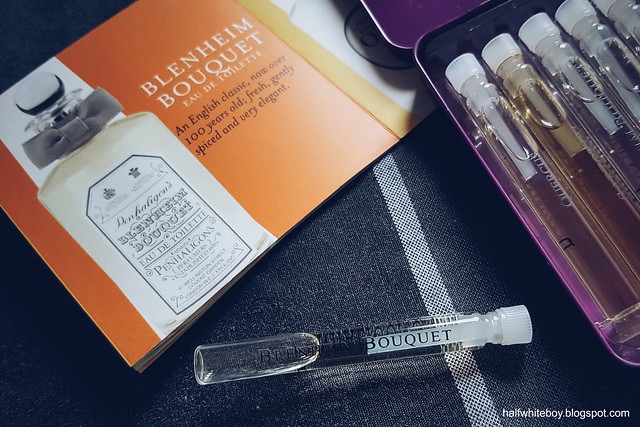 Vial Trials are my reviews of sample fragrances given out by sales people from various store purchases. Compared to my posts about full bottles--which are mostly positive because I already like them in the first place, that's why I bought them--Vial Trials are hopefully less one-sided since they were just given to me; I didn't pick them.

As with my post about another Penhaligon's fragrance--Sartorial--this blog post is a little different because the fragrance I'm reviewing here isn't a sample but part of a scent library trial pack I bought containing five men's and five women's scents.

So Blenheim Bouquet was apparently launched over a hundred years ago in 1902, an enduring classic, with a whole range of men's grooming products to boot.

Blenheim Bouquet is undeniably a citrus fragrance. Its zesty opening reminds me of lemongrass although there's no such note listed. It could be the combination of lemon and lime, I'm not sure. This stays on for a few minutes, after which comes a soft, powdery-green drydown, with the lemon still popping up occasionally.

This century-old fragrance is totally inoffensive, with a soft to moderate projection. To me it smells a little unisex although a female colleague commented that it's totally masculine. Longevity is about average on my skin, but I don't mind doing touch-ups anyway.

I kind of like it but I'm not sure if I like it enough to merit a full bottle. Nonetheless it's a safe and inoffensive scent, so I guess it's all a matter of preference.