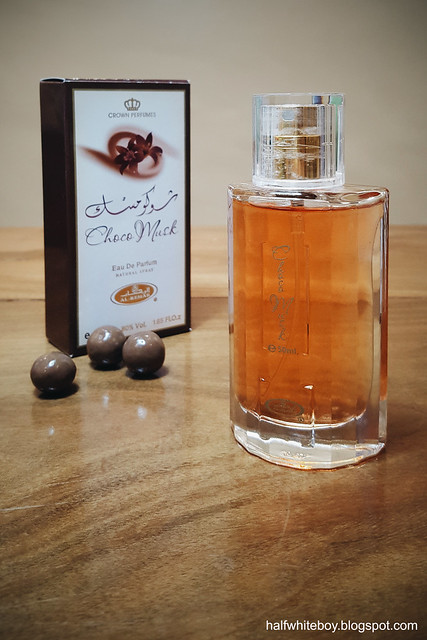 Middle Eastern fragrances are really something. Cheapies and exclusives alike, they all seem to have...power. Sure, not every one of them is well-blended or a projection beast but I think each one stands proud, a testament to the region's rich perfumery tradition. I probably am not making any sense but Choco Musk by Al-Rehab here, a cheapie, is but one example.

Simply put, it smells delicious. Although it's basically chocolate and vanilla and pretty much nothing else that I get, it still is a solid fragrance. Unlike another of Al-Rehab's releases, the monster-in-disguise Soft, Choco Musk is more modest in its projection. That said, it doesn't get cloying unless maybe you bathe in this juice. It's still quite a long-lasting scent, though.

There's a brief blast of alcohol that can pierce your nostrils in the opening but I'm very forgiving when it comes to inexpensive fragrances. It's an entirely different story, however, if a bottle costs you an arm and a leg.

Once you get past that little alcohol inconvenience, it's all sweet yumminess throughout. Despite its name, it's the vanilla that appears to be strongest note here. It competes with the chocolate, eventually winning the battle later in the drydown, also while trampling on everything else in its path. I can hardly detect any musk at all.

But I'm not complaining. Al-Rehab's Choco Musk is still pretty good, especially if you're into gourmands and sweet scents. Forget about try before you buy. Just go ahead and buy it since it's so cheap.