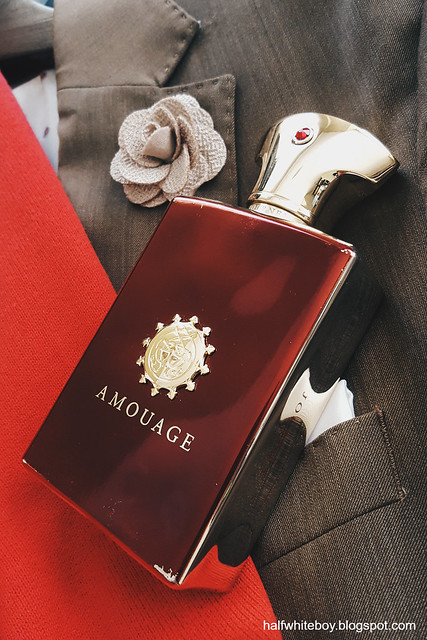 I was lucky to have scored this bottle from a fellow member of one of our frag groups. I know how expensive Amouage fragrances can be, so this was literally a steal. I don't see this particular release talked about a lot online (it's almost always Interlude, Lyric, Jubilation) but boy am I happy that I jumped the gun.

Amouage Journey begins with a citrusy-spicy introduction. It's vibrant but not sharp. Strangely enough I find it a little camphorous, which is comforting to my nose. There's a bit of fruitiness that shows, all while a smoky incense (not a church-y incense like La Liturgie des Heures by Jovoy Paris) looms in the background. Lovely texture there.

As the opening fades, the fragrance's darker base of tobacco and leather is revealed. There's a certain woodiness to it, perhaps due to the incense blended in. There's also a bit of sweetness coating it, but not too much, steering it away from another overly sweet base trap. It smoothens the leather, though, rendering it velvety, which it does in a gradual fashion.

This drydown phase confuses me. It's both dark and bright at the same time, if that makes any sense. It lets you in in its rather brooding demeanor and then surprises you with a smile. So yeah, I think it appears heavy but it actually isn't, which makes it a versatile wear for me. Projection and longevity are not that great but still good overall. I just wish its power is felt (or smelled) a little longer because the scent never gets overwhelming or offensive.

I'm really enjoying Journey. It could be just me but I think it's underrated, easily overshadowed by other more popular releases from Amouage. But it's a beautiful fragrance, one that's well worth the try. As for the price, that's a whole different issue altogether.