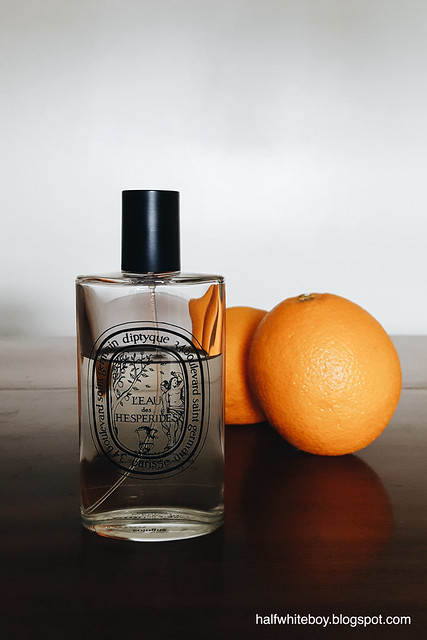 L'Eau des Hesperides by Diptyque is an instant perk-me-up with its heady, minty orange opening salvo. It's literally cool, refreshing, and quite strong at the start. Compared to another Diptyque release with a prominent citrusy orange opening, L'Eau de Tarocco, the orange here is much more pronounced, like it's on steroids. It's all at once zesty, sweet and bitter. It even borders on being cloying, to be honest, so don't overspray, more so because this note doesn't leave so easily.

Nearly just as strong is the mint, which works closely with the orange, balancing it out somehow. If it weren't for this, L'Eau des Hesperides would probably have been downright sickening. As its power wanes, I start to notice the fragrance's green and herbal facets, some hints of floral, too. It's more beautiful and relaxed now, like being able to sit down and stretch your legs after a mad rush.

After that minty orange assault that lasts between one to two hours, projection eases into moderate territory and slowly works its way into a skin scent, jolted back to life only by heat. Longevity is at least four or five hours but can go on to six. Resprays are necessary to extend its life.

This is a nice, unisex summer fragrance and I enjoy wearing it, the citrusy fresh feeling it gives me. It's not the most long-lasting scent but it serves its purpose. Considering that beastly orange note, some people may love it, others may not, so I'd say this easily falls under the "try before you buy" category.