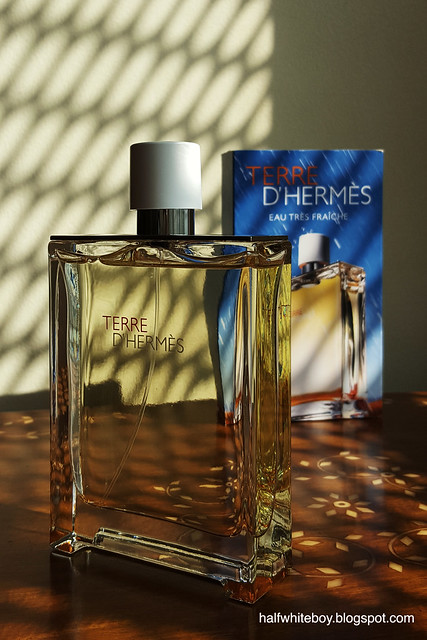 Terre d'Hermès Eau Très Fraîche is a flanker to the original (and one of my all-time favorites) Terre d'Hermès. Because of the name, I was expecting a lighter and fresher take on the modern classic. However, it turned out a little differently than originally anticipated. I blind-bought it, by the way, with little prodding from a fellow fraghead and banking on my love for the original EDT and my faith in its perfumer, Jean-Claude Ellena.

I compared the two side-by-side. Whereas the original opens with a sweet orange and citrus blend, Eau Très Fraîche's equally orange-loaded start is bitter. It's not necessarily lighter either but it's very short-lived and is almost immediately taken over by cumin. Although not overpowering, the spiciness is palpable, something I wasn't expecting at all from an eau fraîche, more so because it's not as discreet as in the original TDH. To my nose, it's actually comparable in strength to the cumin in 1920 The Origin by Tous.

Around half an hour later the cumin starts to mellow and I get some of the initial citrus peeking through again. Eventually we get to its woody base, which, by now is nearly a skin scent yet still laced with trails of orange and spice. I now get what's lighter in this version: the woodiness and the performance. It starts off with moderate strength, then diminishes after an hour. In my case, a few resprays are needed to get me through the day.

Terre d'Hermès Eau Très Fraîche may carry the same DNA as the original but it is its own scent. The two share a few noticeable similarities scent-wise but Eau Très Fraîche goes on to set itself apart by highlighting and toning down certain notes differently than TDH. It's a different kind of fresh because of the spice and I'm not sure if I can really call it a freshie. Nonetheless, it remains a good summer fragrance overall, something that's worth trying at least.