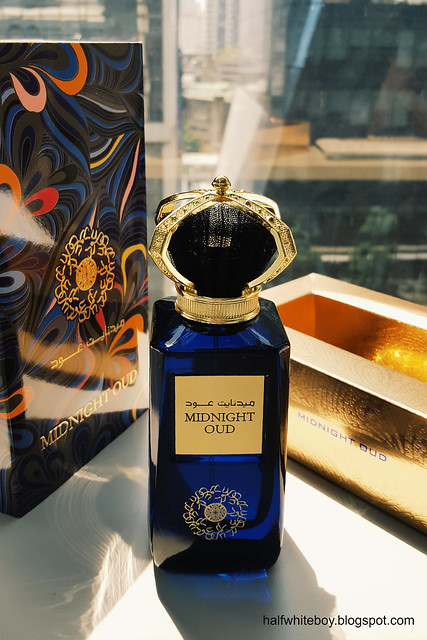 This one was left unused for months, as my order arrived just as summer here was gearing up. I felt it was too heavy to wear at the time but now that the rainy season has kicked in, I thought I'd finally give it a full wear.

Midnight Oud by Middle Eastern house Ard Al Zaafaran is indeed heavy. It's an enthralling, sweet and smoky blend with woody and leathery tones buried underneath it, providing the scent some heft and character. It's strong but personally I don't find it too overbearing unless you go trigger-happy with the sprayer. The resinous sweetness isn't cloying either.

I got this fragrance for cheap (a little over a thousand pesos) and despite the tacky faux cap (Hello, gold-plated plastic crown and mesh!), I appreciate the efforts at product packaging. I always do. And this ones puts those flimsy boxes of way pricier fragrances to shame.

The box's colorful pattern is reminiscent of Amouage Interlude Man. Midnight Oud, after all, is a purported clone of the famed "blue beast." They even adopted the same royal blue color of the bottle, and I must say that the scent is very similar to the inspiration - down pat to its strength. 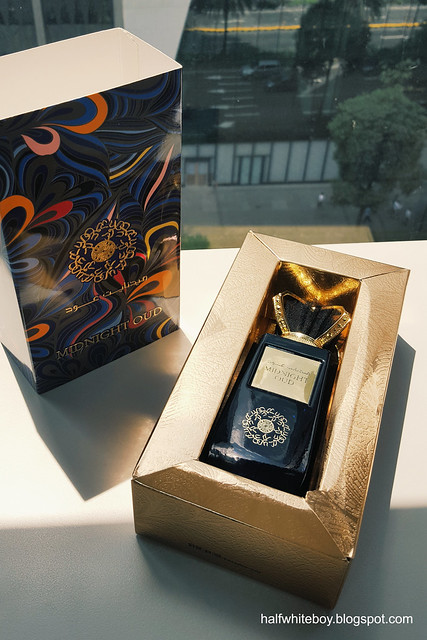 However, Midnight Oud is missing that wonderful, aromatic and spicy opening of Interlude that I really love, as it delivers the goods early on. The fragrance appears downright linear as a result, except that it becomes a little sharp and dry on my skin after about 3 or 4 hours. By this time it also starts losing some of its strength. Nevertheless it is long-lasting, surprising you with sporadic projection bursts until night.

After a less than stellar experience with another of Ard Al Zaafaran's creations, Dirham EDP, my faith in this house, and with Arabian cheapies in general, was restored. But cheapie or not, Midnight Oud proved to be one heck of a fragrance. Now can it be a total substitute for the leaps and bounds more expensive Interlude? The differences are still noticeable to me, so personally I don't think so. But if you're not that picky, it's a more than adequate alternative.