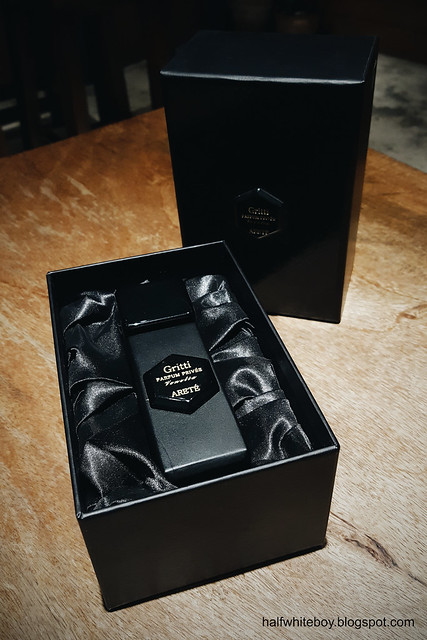 I wouldn't have guessed the bottle's actual shape from this presentation.

Gritti is yet another house I would have never heard of it weren't for fellow fragheads letting go of their bottles. Judging by the scant reviews of their fragrances on Fragrantica, I'd say it's a little known niche house. But I'm glad I took a leap of faith and blind-bought Areté, which the Venice-based brand released in 2015.

Presentation is good on this one, which for me is part of the joy of owning full bottles. And the sturdy black box alone already made for a promising experience. It's also interesting how the pitch-black bottle is presented sideways, which perfectly explains the box's depth. Although stylistically different, the label's placement calls to mind Jovoy Paris. 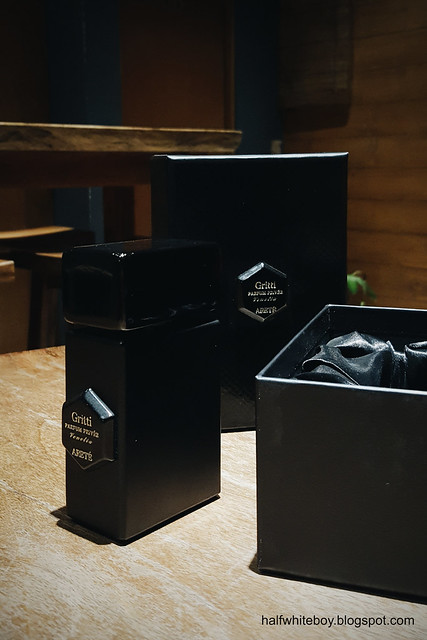 Scent-wise, Areté gives off a wonderful first impression with a strong and sweet boozy accord predicated by an equally strong leather note. Both the sweetness and booze render the leather smooth and possibly more likable to most noses. In spite of this glossing over—in the same vein as how leather is treated in Tom Ford's bestselling Tuscan Leather or in Memo Paris's French Leather—the leather's power is never diminished.

The opening also carries some hints of spiciness although they never are really able to break through. The fagrance later takes on a slight woody turn, lending it just a bit of sharpess. But the leather never lets up and eventually the wood retreats, blending into the background that provides the main star its layered character.

Around two hours later, a musky facet takes a stab at the leather's dominance. The two duke it out. One moment I get musk and then it's barely detectable in the next. This game of hide-and-seek carries on for a little while before the musk finally disappears.

In my opinion Areté isn't the most unique of leather-based fragrances. Yes, I feel like I've smelled similar scents before—not exactly the same, just similar. However, it's beautifully executed and it does have depth. And coupled with its mostly heavy projection and long life, this to me makes it worth owning. Still, try before you buy. 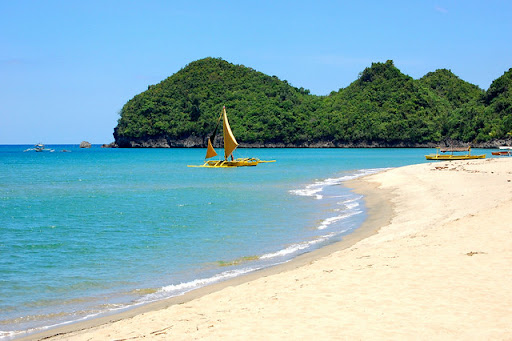 Being an archipelago, it's no surprise that the Philippines is home to a lot -- and I mean, a lot -- of great beaches. But the idea that there are also a few good ones in the southern part of Negros Occidental in the Visayas seems largely unheard of for most Filipinos. One of these is the kilometer-long Sugar Beach in the city of Sipalay , a land far, far away. The lovely Sugar Beach. Looking for a nice, quiet beach far from the chaotic Holy Week crowd, My Bibe and I spent four nights at Sugar Beach. I first read about it from a magazine when we were at Anda, Bohol back in 2010, and was convinced to include it in my travel list. Finally the time was right. Going to Sugar Beach reminded me of my earlier travels with My Bibe, where we regularly sought off-the-beaten-track destinations, usually with no hotel reservations whatsoever. We didn't completely dive back to that, however, as we still managed to afford ourselves some level of comfort. We flew to Bacolo
Read more

Back in June 2010 when My Bibe and I vacationed in Thailand, we did Phuket and then  Ko Phi Phi . Going back to Bangkok from Phi Phi meant traveling by ferry back to Phuket first. We thought it was too much travel in one day so we decided to spend just one more night in Phuket. There are several beaches to choose from and we picked yet another quiet spot, Mai Khao, which was closer to the airport than were the other beaches. We were spoiling ourselves a bit at the time and booked a Garden Pool Villa at SALA Phuket Resort and Spa . Having your own private pool didn't actually come cheap, but we were glad we did it. A beachfront section of the resort, with one of two swimming pools in view. Here's an account of our experience at SALA Phuket and see why it's one of those places I wanna go back to: Reservation and booking This was done online, so there was absolutely no hassle. Confirmation was emailed promptly as well. Upon booking you get to choose your toiletri
Read more

FRAGRANCE | French Coffee EDP by Al-Rehab: It's so yummy! 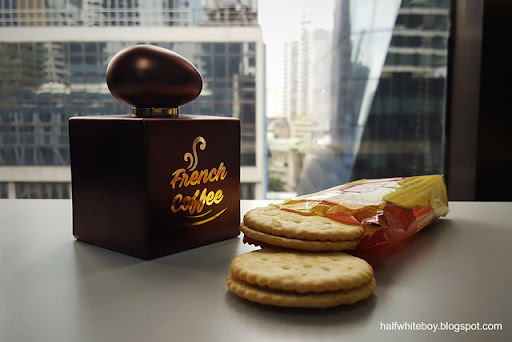 I have a few fragrances from Middle Eastern house Al-Rehab , all of which are lovable cheapies. From the unassuming Choco Musk , to the monster deceptively named Soft , they sure do not disappoint. Now it's time for French Coffee .
Read more