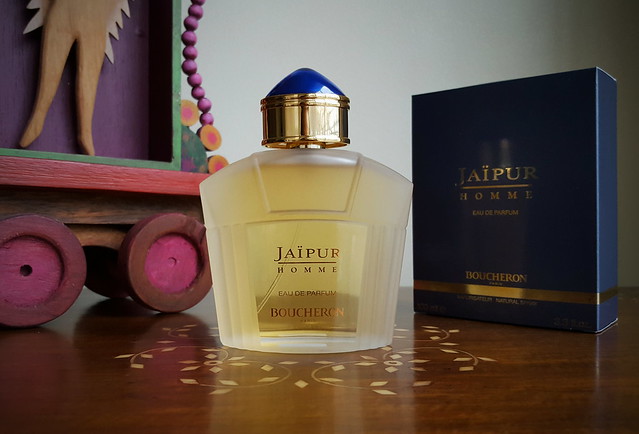 Jaipur. India. Spices come to mind. I was expecting an eclectic mix of them, which could either turn me off or blow me away completely. Even its gorgeous bottle--everything from its shape to its gold and royal blue cap--is evocative of India. Yet somehow, Boucheron's Jaipur Homme EDP is surprisingly light and powdery. It's as if the fragrance belies its name.

But there is spice, which, of course, can be interpreted in countless different ways. There's the sharpness in ScentSmith Perfumery's Pink Pepper Leather, the boldness in Penhaligon's The Uncompromising Sohan, or simply the warmth and comforting effect in Serge Lutens's Baptême du Feu. In Jaipur Homme it's powdery, which I think can be credited to the cinnamon.

As is common in most fragrances, there's a blend of citruses that accompanies the opening. This early, though, the combination of sweet, spicy, and powdery accords is already prominent, and becomes even more pronounced once the citruses go for the exit. That said, Jaipur Homme feels fresh and light despite the spiciness. I find it to be well-blended, featuring an ensemble cast rather than a few prominent stars with supporting players around them.

Projection is somewhere between moderate and heavy, depending on how much you sprayed. As it settles closer to the skin after a few hours, it becomes less spicy, leaving a sweetened woody accord. This is one long-lasting fragrance although I normally use an extra spritz or two whenever I want to reactivate its projection power.

This is another successful blind buy for me (Geez, I feel like I'm getting really good at this!) but I must caution that there might be people who are averse to its spiciness, hence, try before you buy. Nevertheless, Boucheron Jaipur Homme EDP for me is a fantastic fragrance that's fairly unique in its composition and blend. It also has great performance without being cloying. Love it! Definitely worth trying.