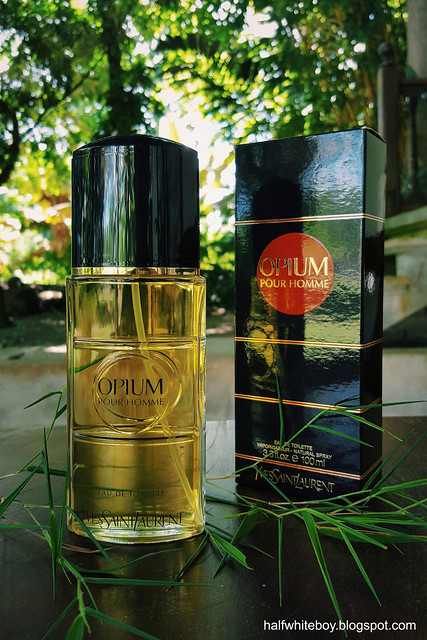 A 20-plus-year old fragrance and I've only tried it now. Shame, I know, but better late than never. Described as an oriental spicy fragrance, plus the fact that it came out at a different time, I had apprehensions over this blind buy. No, I wasn't concerned about whether it's considered by many as dated or what because I do dig old-school frags. Somehow I just didn't know what to expect. Well, I thought it would be a monster but no, Yves Saint Laurent's Opium Pour Homme is one beautiful creature. The bottle, not so much.


I don't know what the EDP is like but this EDT has a pleasant, spicy-fruity opening. Unlike some spicy fragrances that open sharp and piercing (like, say, Pink Pepper Leather by ScentSmith Perfumery), Opium Pour Homme's spiciness is reined in and balanced off by the black currant, resulting in a very agreeable first impression. Instead of challenging you, it welcomes you in.

There's a wee bit of skank that accompanies the opening but I only smell it when I bury my nose deep into my wrist where I sprayed. Not to worry, though, because it almost immediately makes a dash for the exit. Besides, it's barely noticeable in the first place.

After the intro I get a camphorous accord but I don't know where it's coming from. I enjoy it, though, and it lasts for maybe an hour or so. I also get powdery, which all the more adds to Opium's appeal for me. The spicy-fruitiness is still there, however, but has somehow softened at this stage, blending beautifully with the powdery and camphorous accords I mentioned. Eventually a vanillic sweetness kicks in, slightly resinous with a soft, woody undertone.

After a couple of wearings I thought that it doesn't project much until a colleague about 2 feet away complimented me, and that was around 2 hours after I sprayed. That said I'd place projection somewhere between moderate and heavy. It's at its best in its first 3 hours but this fragrance has legs. Although closer to the skin after about 5 or 6 hours, it can last you the whole day. Personally I use an extra spritz or two in the afternoon to boost its performance.

All things considered--price, too--YSL's Opium Pour Homme is worth having. Even though I find it pleasant and inoffensive, I'm not so sure if it's a safe blind buy. Unless you're very open to all sorts of scents, I guess you should try it first. But I'm betting that you'll like it anyway.