July 17, 2011
First off, I'm happy that Harry Potter and the Deathly Hallows (Part 2) has just broken the record for the biggest single-day box office gross (in the U.S.), which was previously held by The Twilight Saga: New Moon. Deathly Hallows (Part 2) earned $92.1 million on its opening day, close to $20 million more than what that vampire-werewolf movie made when it opened. It's just wait and see until tomorrow if it knocks off The Dark Knight (my all-time favorite movie) for the biggest opening weekend ever. I really don't care much except that I hope that this last Potter movie will be the one to finally breach the $1 billion mark for the franchise. It's like there's a protective charm around that figure. I hope Voldemort breaks through that just as he tore through the web of charms around Hogwarts. Moving on, we all know that Potter author J.K. Rowling has promised no more Harry Potter books. Okay, fine. But I do wish that she still write stuff, not necessarily about the boy wizard, but of lots of other things around the Harry Potter world. Much like Tolkien, Rowling can create a universe of her own. Here are a few things that come to mind:

Voldemort. The dark lord is arguably a very enigmatic character. He is, to me, the greatest and most powerful wizard that ever lived (in fiction, of course!). Writing another seven books about him, however, would be too much. I'm thinking maybe three: one for his childhood years, another for his years at Hogwarts, and a third for his life after wizarding school.

Severus Snape. Okay, I didn't really think about him that much for Rowling to write a book on but a few of my colleagues in the office were all of a sudden so in love with him after watching the final movie. They pitied him so much. But yeah, it could be interesting, this Snivelus guy. 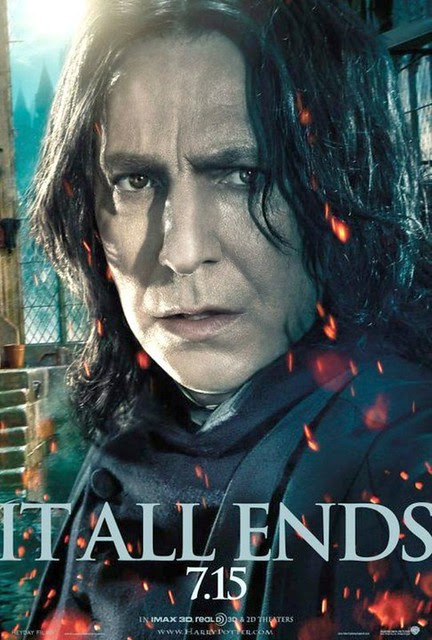 Albus Dumbledore. I wanna read more of his dark side, his hunger for power and greatness. And oh, Rowling mentioned he was gay. How would that play out in a book? Or two. Or three. Bring in Gellert Grindelwald!

The four founders of Hogwarts. Wouldn't it be intriguing to get to know them? And wouldn't it be more intriguing to read about the conflicts among them, more specifically when Salazar Slytherin is involved? How did he construct the Chamber of Secrets and manage to sneak a basilisk into the castle?

How the elves got to become slaves. We all know that they're bound to serve their masters forever until they're set free by the mere act of handing them clothes. But what really is their history? Why did they end up like this when they have impressive magic of their own?

The war between wizards and goblins. We've had glimpses of this somewhere in the seven books but making it into a full-blown novel would be fantastic.

The giants. So Rowling can finally explain how "half-giants" came to be.

How the very first wands and spells were created. Come to think of it, how was the first wand made? Who made it? Wandlore seems highly specialized. And how do you actually create a spell? Why can't anyone just make up something?

The early years of witchcraft and wizardry. On second thought, the preceding suggestion could be incorporated in this one, so there would only be one book. Merlin certainly wasn't the first wizard to walk the earth.

The Peverell brothers. I think they deserve a book of their own. After all, Harry Potter is a descendant. And so is You-Know-Who.

Durmstrang Institute for Magical Learning. It's been said that this school has a leaning on the dark side. But what's it really like in this school? There has to be some central character, however. Could even be about its founding, I don't know.

Beauxbatons Academy of Magic. Or Rowling could write more about veela. They have been described somehow in Book Four but Fleur Delacour doesn't quite seem to fit the bill. Bring along full-blooded veelas, not half or quarter-bloods like Ms Delacour.

The adventures of some great auror. I'm sure Rowling could think up of someone. He could be the ultimate auror, and Rowling could write about his adventures with banshees, dark wizards and witches, etc. That would be great.

The first muggle to ever be accepted into Hogwarts. Oooh...I'm seeing a lot of bullying here, loads of challenges, and how he or she overcame all adversity to graduate at the top of her class! Awesome! Sorry, Hermione, you merely benefited form him or her somehow.

The centaurs. These magical creatures are also at odds with wizards and witches. Rowling could delve deeper into the why and how in a book. I suppose there also would be a great war or something.

The secrets of the Forbidden Forest. Just how big is this forest and what creatures are lurking within?

There's obviously more. I just want to stress that the possibilities are endless for Rowling. I'm thinking she's scared writing a different book won't sell. But hey, I'm sure it'll only keep Pottermania more alive. But then she came up with Pottermore, which I still don't fully grasp. She said she'd supply some details and the rest is gonna be up to the readers or something like that. I'm still confused. I signed up anyway, and so I just have to wait what happens on July 31. I'll leave you with her video announcement.