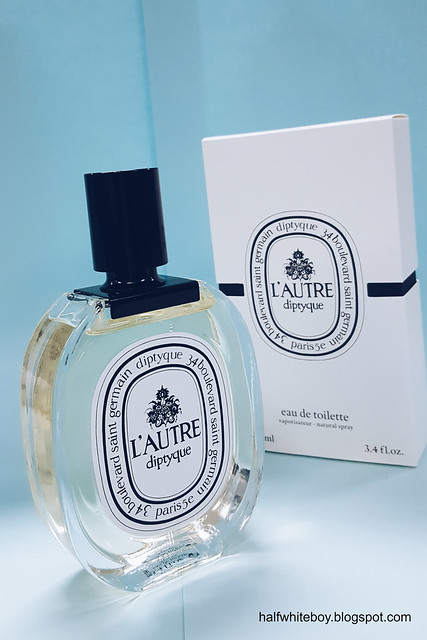 Just days ago as I was passing by the Diptyque boutique at the mall, I noticed that there were more bottles on display than usual, so I dropped by. True enough there were three new bottles on the rack. However, they weren't new releases, as a quick scan on Fragrantica showed that they were from the 70s and 80s, and yet I've never seen them before in any local store. I tried them on and liked all three. But since I can't have them all in one go, I was forced to pick just one. For now.

L'Autre by Diptyque is a heady, if not eccentric, showcase of spices. And I mean spices—not just a tinge or some minute amount meant to add character or depth to a fragrance. It opens with a powerful dose of cumin and probably a handful of other spices, unapologetic and bold. If I'd smelled this five years ago, I would most likely have dismissed it outright as repulsive. But then I've come around the scent of cumin and spices in general since then. After all, there's cumin in one of my all-time faves, Terre d'Hermès, and in its supposedly lighter flanker, Terre d'Hermès Eau Très Fraîche. Once upon a time I also hated Penhaligon's The Uncompromising Sohan for its untoward spiciness. Now I love it.

There's something lemony accompanying the opening, which somehow helps ease the bluntness of the spices. Apart from it there's nothing else to "prettify" things here, no sweetness or anything. This ain't dessert after all. Later, however, the spices mellow a bit as they settle on a bed of earthy patchouli, resulting in a warm and delightfully dirty embrace that lasts.

L'Autre is, without a doubt, not for everyone. However, I do appreciate the "art" in it, the audacity in bottling up something as odd as this (by mainstream standards, of course). Although not of nuclear proportions, this is a true spice bomb. I say try it, for who knows if you'd wind up liking it?